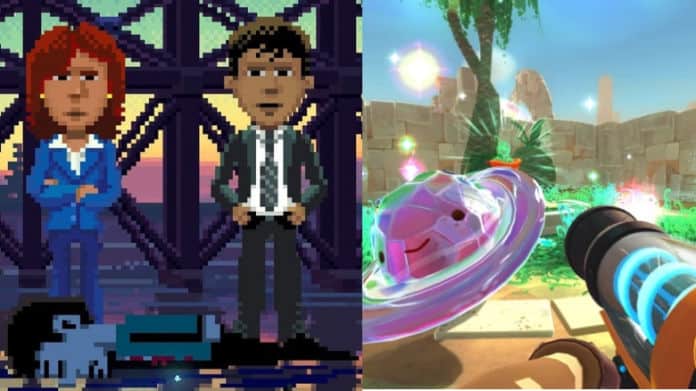 Thimbleweed Park is free on Epic Games from now until March 7, 2019. After that, from March 7th to March 21st, Slime Rancher will be free to download. Once you download the game, it’s yours. But remember, the game can only be downloaded during its two-week window. After that, you’ve missed your chance.

Developed and published by Terribly Toybox, Thimbleweed Park is a point-and-click, neo-noir mystery set in 1987. Over the course of the game, you’ll play as 5 different characters all working together to solve this murder mystery that gets weirder over time. This exploration and puzzle solving comes from the creators of Monkey Island and Maniac Mansion.

Slime Rancher is an adorable first-person, sandbox, simulation game that follows the story of Beatrix LeBeau, “a plucky, young rancher who sets out for a life a thousand light years away from Earth on the ‘Far, Far Range’ where she tries her hand at making a living wrangling slimes.” The game was a massive success and Monomi Park achieved this while sticking to 40-hour work weeks, as reported in detail by Patrick Klepek for Waypoint.

These releases are a continuation of Epic Games Store’s limited-time free games that change every two weeks. In the past, the free titles have been Subnautica, Super Meat Boy, and What Remains of Edith Finch.

Free, quality games are a great reason to install Epic Games Store but the platform swiping up games from Steam and turning them into complete (or timed) exclusives has created controversy within the PC gaming community. Players were upset that Metro Exodus was suddenly pulled from Steam and many aren’t happy about Super Meat Boy Forever coming to Steam one year after its release date.

We’ll see if these deals are enough to get players into the Epic Games eco-system as their number one place to get PC titles.