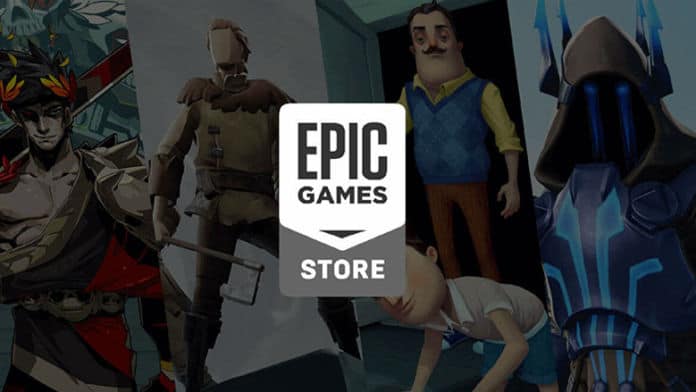 Since its launch in 2003, Steam has established itself as the supreme PC gaming platform. It has amassed over 90 million monthly users and brings in around $4 billion dollars annually in revenue. It is safe to say that they are the place PC users go to in order to purchase their games.

For so long, they have created and set the rules for the PC side of the industry- they determine the price of games and the developers cut. For the better part of 15 years, their supremacy has gone unchallenged. Enter Epic Games Store.

The Birth of the Epic Games Store

Launching less than a year ago in December 2018, the Epic Games Store is a rival PC store from the creators of Fortnite and Unreal Engine. Until the launch of the Epic Games Store, Steam really hadn’t had much competition. Sure another storefront would pop up every now and then, like EA Origin or the Blizzard gaming store, but they are mostly a place for the respective publishers to publish their own games. Whereas the Epic Gaming Store poses a real threat because its best selling game is free and they are making deals with loads of developers!

The Epic Games Store has created quite an uproar in the community by acquiring ‘exclusivity’ to games on PC. However, they didn’t start off firing out of both cylinders and only acquired exclusivity to smaller games like Hades and Ashen. However, it didn’t take long for them to start racking up some bigger exclusives, like The Walking Dead: The Final Season and The Division 2, which were picked up within a month of the store’s launch. 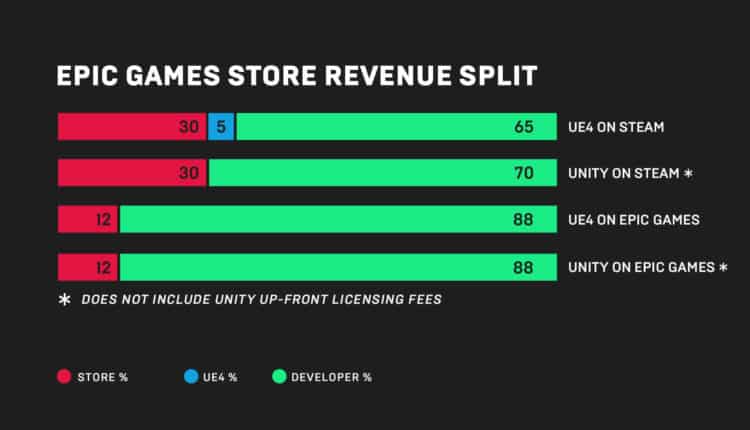 The Battle of Percentage

So, why are developers making all of these exclusivity deals with the Epic Games Store in the first place? Well, because of a little thing called percentage. Currently, Steam offers developers a base 70% revenue cut, meaning Steam keeps 30%. Once a game’s sales make it over the $10 million dollar mark, they relinquish an additional 5% to the developers and if they make it to $50 million in sales, Steam hands over another 5%.

Additionally, Steam rewards the big studios, while leaving the smaller studios (who need the money a lot more) in the dust. Indie developers have nowhere near the resources that the larger studios do and the cost to make great games is typically quite expensive. By the time you factor out development costs and Steam’s 30% cut, smaller developers are sometimes left with very little profit.

The Shaming Heard Around the World 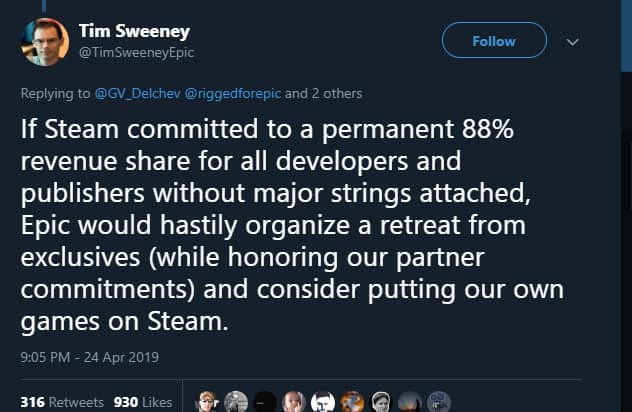 Tim Sweeney, Epic Games Store CEO and majority shareholder, took to Twitter to say that if Steam committed to an 88% revenue share for developers (one equal to that of the Epic Games Store) then they would “hastily organize a retreat from exclusives.” This tweet was obviously picked up by various gaming outlets and after that, pretty much everyone in the gaming world heard about the Steam shaming.

What’s funny about this tweet is that it doesn’t necessarily seem to have malicious intent. It would seem that if it was meant to directly shame Steam, then Sweeney would have at least given this statement its own tweet or taken to a different platform to make the announcement. Instead, the tweet came in a long thread between Sweeney and four other Twitter users. It seems to have been more of a casual conversation than public shaming. If Sweeney was trying to call out Steam, he probably would have taken more of a Tony Stark approach in Iron 2, when he gave out his home address to a known terrorist via the press- I digress.

Why Does Percentage Matter to Me?

Let’s say in this imaginary world it would cost a developer $100 to make a game.  If they amass $250 in sales, Steam is going to take $75. So, after you factor out development costs, the studio is making $75. The same amount as Steam. While at the Epic Games Store, they are only taking $30, leaving the developers with $120 after development costs. Sure this example is silly, and a game might have a larger number in sales, but it gets the point across. Steam leaves developers with a lot less money than the Epic Games Store does.

It still remains to be seen how Steam will respond to the public shaming handed to the company by the Epic Games Store. Will they change their business model or will they try to ride out the Epic Games Store exclusives? One also must wonder if there enough room in the market for two major PC storefronts? If there isn’t, which one is going to last? Unfortunately, none of these questions currently have answers, but as always seems to be the case, time will tell.