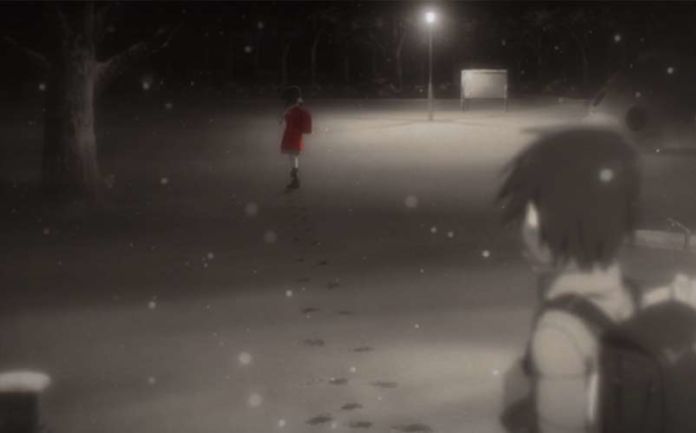 “Every day, the words cross my mind. ‘If I had done this back then…’ But they don’t take the sincere form of regret. The words are just an excuse that come to mind, then disappear. I’m scared to get to the heart of my own mind.”

Since it’s a new year, there is a new season of anime, with several new anime series premiering over the next few weeks. Although the anime world is full of the next shounen action shows, sequels to previous series, and tons of cute girls, there are some new original anime series that stand out from the rest. These titles are unique and bring new life into the familiar world, either with fascinating concepts or intriguing characters. ERASED, an anime by A-1 Pictures, has both of these qualities, showing much promise in its first episode. 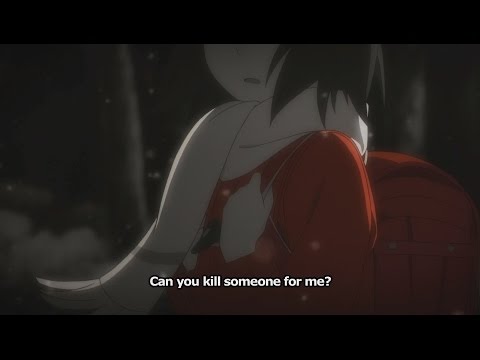 As depicted in the trailer, ERASED follows the life of Satoru Fujinuma, a 29 year old aspiring manga artist who has tried time and time again to live his dream. After his work was constantly shot down by publishers of magazines, it is clear that Satoru has lost all hope. By anime standards, Satoru is definitely not the typical protagonist. For starters, he is not in high school, a trope that has become a commonplace in many new anime shows and series. Secondly, he is not the “average” protagonist that is a “nice guy” trying to save the world. He is an adult who is facing the realities of  life, going through the motions day by day. It is evident that Satoru is experiencing some sort of depression, devoid of emotion from his hopes being crushed almost daily. 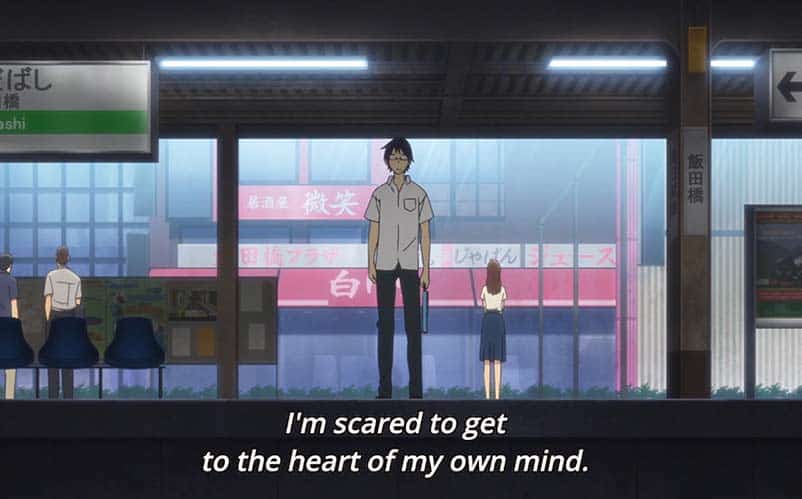 Because he did not make it in the manga artist world, Satoru holds a job as a pizza deliveryman in his city. One day, however, his powers are revealed in a very unique way.

Satoru Fujinama can travel through time.

Time traveling is not a new concept. It’s been an amazing plot device in Steins;Gate and a classic sci-fi plot found in many novels and movies, of course. However, ERASED revitalizes the concept with Satoru’s “Revival” ability. This specific ability takes the protagonist back in time 1-5 minutes before a life-threatening or instance of death occurs. From here, he must determine who and what to save in a limited time frame. We first see him frantically trying to stop a truck driver who had a heart attack before he hits an innocent boy crossing the street. Sure, this scenario has been done before, but the fact that Satoru saw it coming and had to stop it singlehandedly was very thrilling.

Many protagonists would barely get a scratch from an encounter like this, but Satoru ends up in the hospital. Here he is met by his high school aged coworker Airi Katagiri. 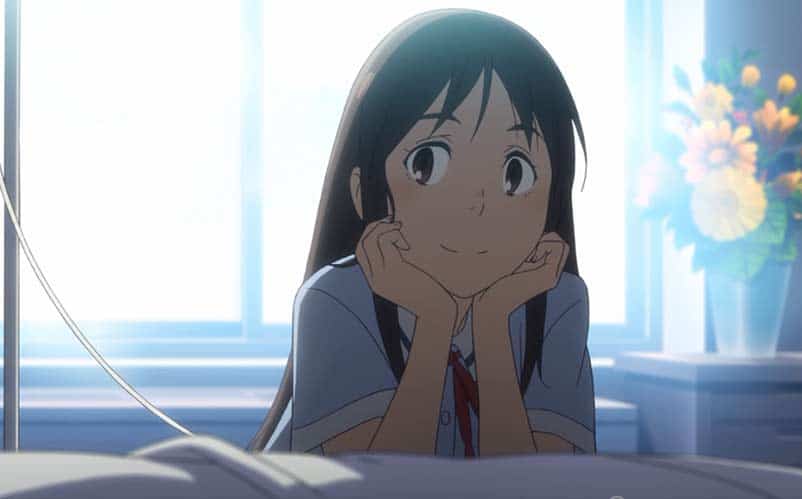 Airi is energetic and optimistic, contrasting Satoru’s pessimistic nature. It’s not entirely clear why she went to the hospital to visit other than being a caring coworker. However, Satoru and Airi share a conversation about hopes and dreams, adding another philosophical element to the story. Should we be afraid to tell others our dreams or is it even worth it? This conversation alone already makes Airi a likable character, even though she did not have much screen time. She leaves after a short bit, but returns in later scenes.

After his accident, Satoru’s mother, Sachiko, decides to live with him for a little while, paying him a visit in his apartment. After some son and mother banter, he reluctantly agrees to let her stay. Sachiko is a great character who’s role will serve an important purpose in the entire series. 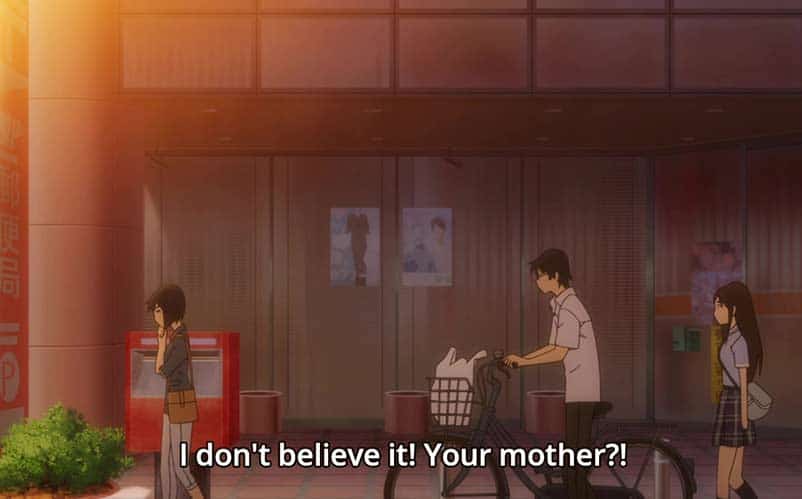 Eventually, an encounter with Airi leads to her meeting Satoru, resulting in a hilariously awkward dinner. This is one of the best comedic moments in episode one, providing some comic belief before the show becomes rather dark, a turning point that I, as a first time viewer, did not expect.

Sachiko mentions an incident from Satoru’s past, something he would like to forget. Back when he was a child, two of the protagonist’s classmates were abducted and murdered by a man he thought was a friend. This shows the dark undertone that will soon become one of the main focuses of the series. Before the murder kidnappings, Satoru had an opportunity to talk to one of the classmates, but left her alone. For this, he still blames himself for not approaching her.

Soon after, Sachiko and Satoru go grocery shopping, his “Revival” powers activating within seconds of stepping outside. This time, the protagonist could not put a finger on what to prevent. However, through his mother’s eyes, we see her stare at a mysterious man who was holding a little girl’s hand, taking a picture of the license plate. From here on out, the entire episode becomes even more of a thrill ride.

Without spoiling, I’ll just say that things end up horribly for Satoru after coming home from work one day. The events that follow lead to traveling back in time even longer to discover the details of the case from long ago and the current predicament that he has to deal with. This is where the episode ends, swiftly yet beautifully. 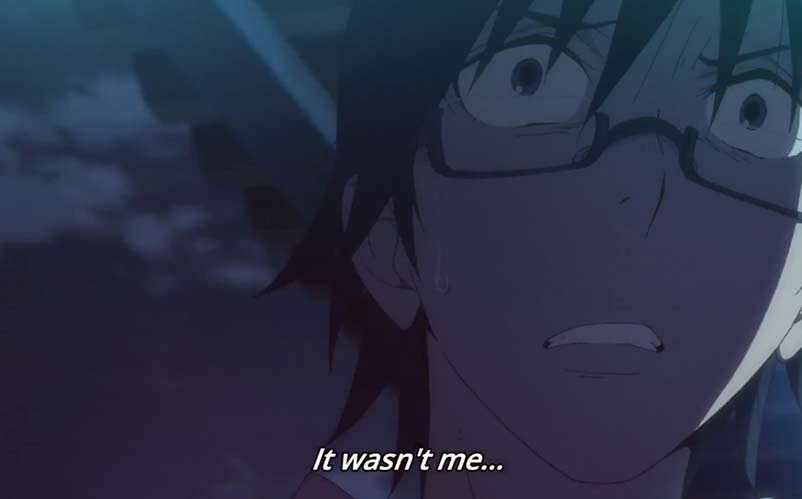 With high quality visuals, animation, and a great setup for episode 1, ERASED holds a great deal of promise for a new anime series to watch. The sci-fi murder mystery story seems very fresh, and it will be interesting to see where things leave from here. In fact, the episode leaves on such a large cliffhanger that I am motivated to start reading the manga series (titled Boku Dake ga Inai Machi in Japan).

Overall, the series is already off to a great start with a new take on crime/sci-fi anime, memorable characters, thought-provoking dialogue, and a supernatural tie-in. Let’s hope that the rest of the series follows the manga and becomes a masterpiece.

The first episode is available for streaming on Crunchyroll’s website as well as Aniplex of America.