Fallout 76 Roadmap for 2019 Gives the Wasteland a Brighter Future 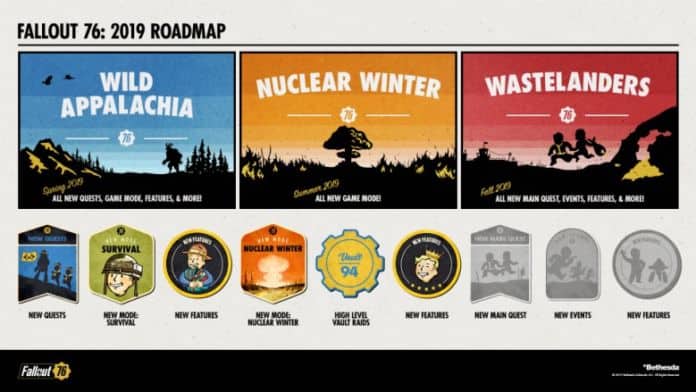 Bethesda is well aware of Fallout 76‘s rough start and, towards the end of 2018, it promised things would be different in 2019. And this is a New Year’s Resolution the company intends on keeping.

Today, it officially announced its plan with a 2019 roadmap that includes three major content updates be spread over the course of spring, summer, and fall. These updates are named Wild Appalachia, Nuclear Winter, and Wastelanders, respectively.

Each update varies in regards to its content but, overall, you can expect new sides quests, main quests, features, events, and more over the course of 2019.

Below are the official details, as provided by Bethesda.

“A mythical beast, a lost generation of scouts, and the strongest brew this side of the wasteland. Welcome to Wild Appalachia – a series of new quests, features, events, crafting systems and more starting on March 12 and appearing over several weeks. Wild Appalachia includes:

Summer will bring another series of major updates to Fallout 76, including Nuclear Winter – an entirely new way to play that changes the rules of the wasteland.

Embark on a tale with true choice and consequences in Wastelanders – our biggest and most ambitious update for 76. Wastelanders will include a new main questline, new factions, new events, new features and even more surprises.”

Previous articleCall of Duty: Black Ops 4 Reserve Earning Seems Capped at Tier 100
Next articleCrackdown 4: What Would Make Us Care About the Next Crackdown?