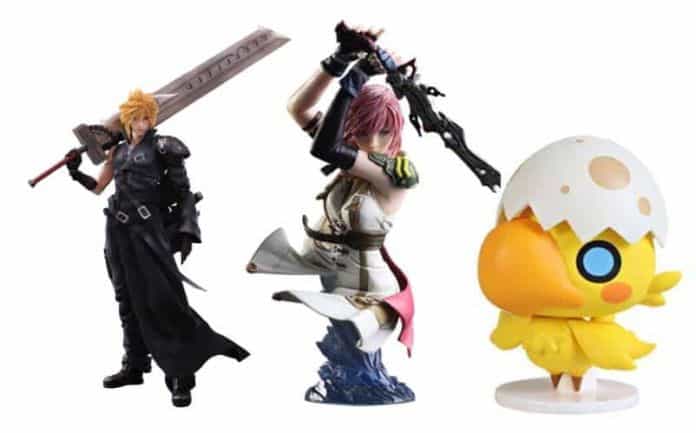 Since the series first released in 1987, Final Fantasy has had much success, with new heroes taking on the great evils of their world. The game has had many remasters and sequels and has spanned many genres, consoles, and devices including the NES, SNES, PlayStation, PlayStation 2, PlayStation 3, Xbox 360, PlayStation 4, and Xbox One. Hell, there are even mobile games now. 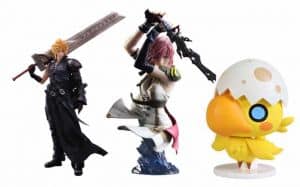 Final Fantasy has even inspired some films and led to the creation of manga, radio dramas, and a Final Fantasy: Unlimited anime series. Each story stresses the passion, struggles, and the tragedies the characters face and they also look at interpersonal relationships such as love and rivalry. Since Final Fantasy XV sold five million copies on the first day its safe to say that it still has a solid fan base. 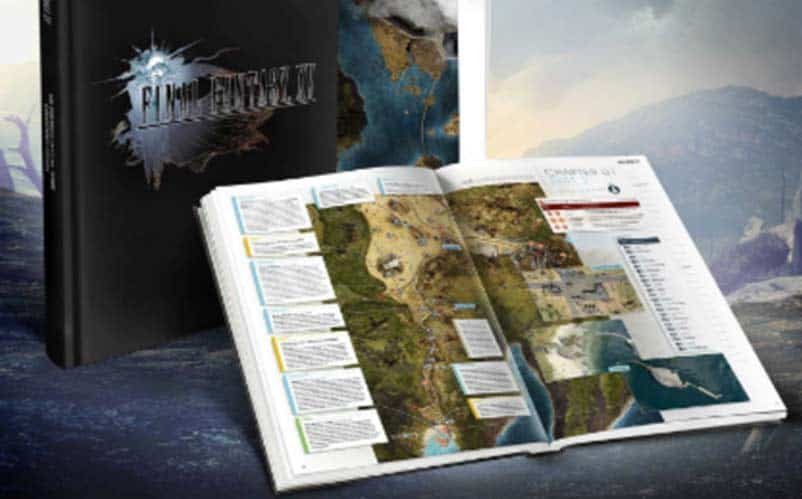 Final Fantasy XV‘s guide comes with information on all the missions, side quests, secrets, collectibles, trophies, and achievements. This 352-page guide also includes walkthrough charts, a detailed bestiary, a list of all weapons, and one of every accessory noting every item sold in the shops. The collector’s edition comes with an extra 32-page section and an extra large map poster. The well-edited book even goes out of its way to avoid spoilers. 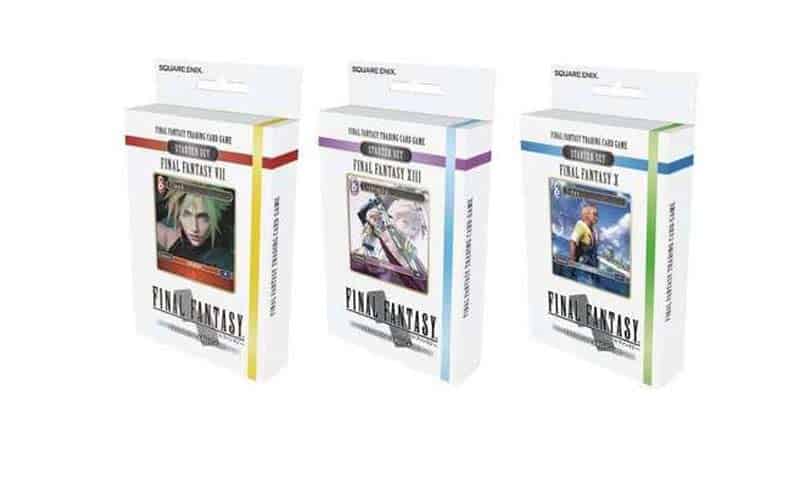 For fans of the series who didn’t already know, Final Fantasy has a trading card game. In the game, players work to generate Crystal Points in order to play cards on the field and use special abilities to defeat their opponents. The game has three different card types, backups, forwards, and summons. Backups are used to generate resources. The forwards are attackers and their power level cand be found at the bottom right of the card. Summons are one-shot cards. Each card has an element which can be identified by the color of the card. These starter sets each come with 50 cards, a game mat, and a rules guide. 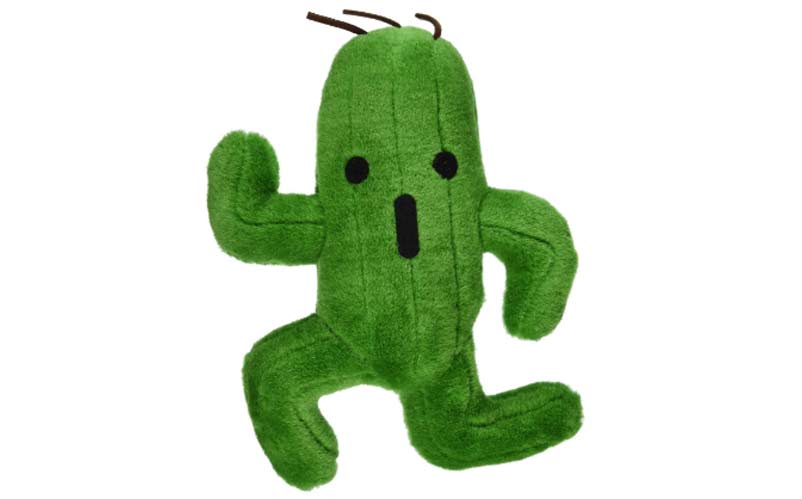 As a recurring enemy throughout the series as well as a summon, the Cactuar are little cacti with 3 small holes for faces, stiff limbs, and their own unique language. Cards for them also appear in the trading card game. The design for this character came from a high school drawing by Tetsuya Nomura and it can be found in a variety of areas through the games. First, they are seen in a small desert near Maranda, then in Corel Desert as well as Cactus Island. In other games, they can be found in the Kashkabald Desert, Bikanel Island, and Thunder Plain. Fortunately, this Final Fantasy plush does not have 1,000 needles. 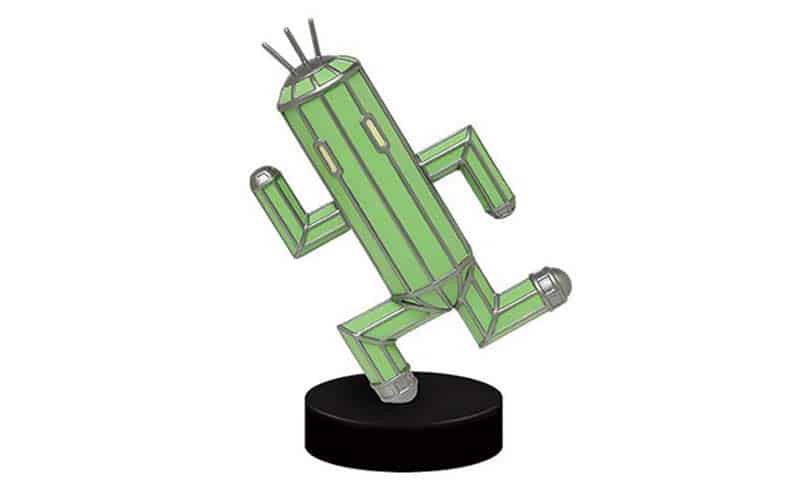 If plushies aren’t your thing check out this amazing lamp. These creatures were once known as Cactrots. They first appeared in Final Fantasy VI and are very quick making them difficult to attack. In later games, Cactuar can be morphed into Tetra Elementals. The creature is so well loved that it also shows up in a wide array of non-Final Fantasy games including Mario Sports Mix, Rise of Mana, and of course Kingdom Hearts. 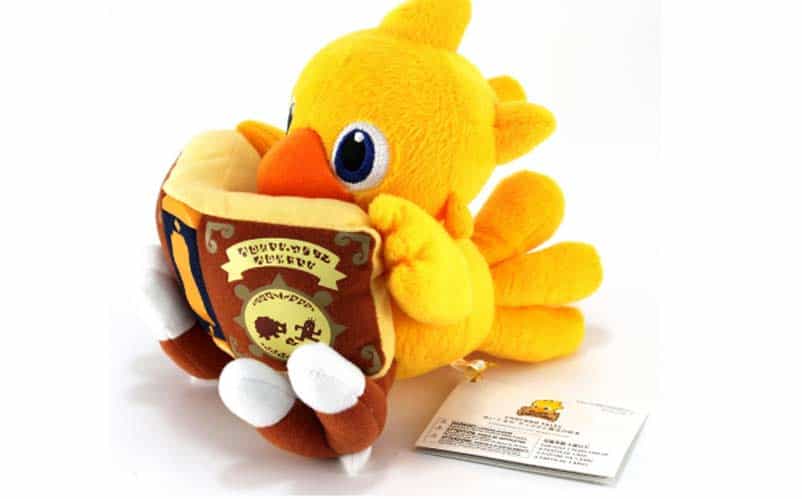 Chocobos are intelligent, friendly, and flightless birds similar to Emu and can be ridden by players at high speeds. While they tend to be forest dwellers they are easily tamed with food like Gysahl Greens. That said they have been ridden into war and used for combat with their sharp beaks and claws. While they tend to be yellow certain black Chocobos are able to fly. Designed by Koichi Ishii, who also created the Moogle, this characters a lot of games where it is the focus including Chocobo Racing 3D for the 3DS and Chocobo Panic for the IPad. 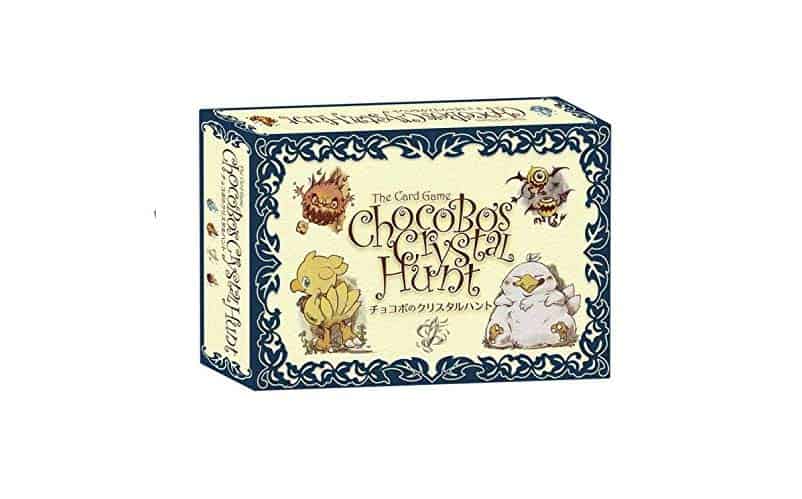 If you are still looking for a Chocobo themed game for once devices are turned off then why not try Chocobo’s Crystal Hunt? In it players attempt to steal their opponent’s crystals before losing their own. It has its own exclusive art, is meant for three to five players ages five and up, and takes ten to twenty minutes to play. The game consists of 43 cards. There are 19 hunt cards, 16 crystal cards, and 8 monster cards. 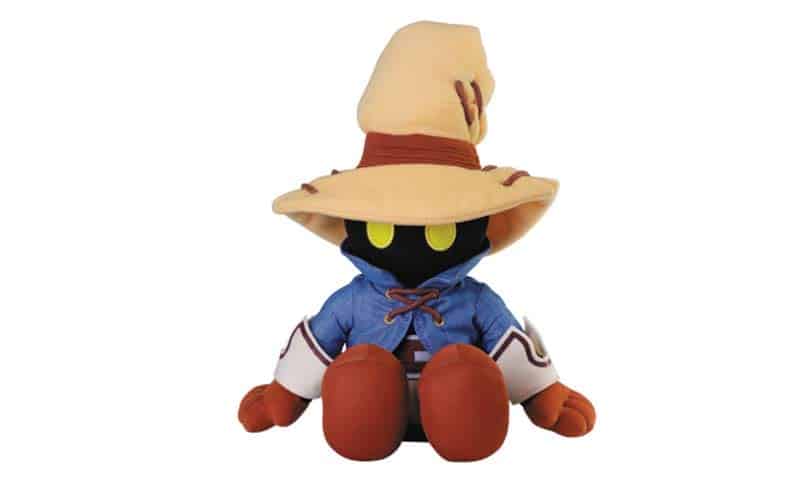 This black mage with a pointy hat and blue clothes has glowing yellow eyes, can cast magic, and is a playable character in Final Fantasy IX. The character is clumsy, gullible, stutters, and lacks confidence. During his journey, he gains confidence and becomes a bit braver. Created by Dali he is a prototype that fell out of a cargo ship making his way into a nearby forest. Later he was raised by a Qu who hoped to make a snack out of him but he didn’t grow any bigger. But the Qu named Quan passed away. 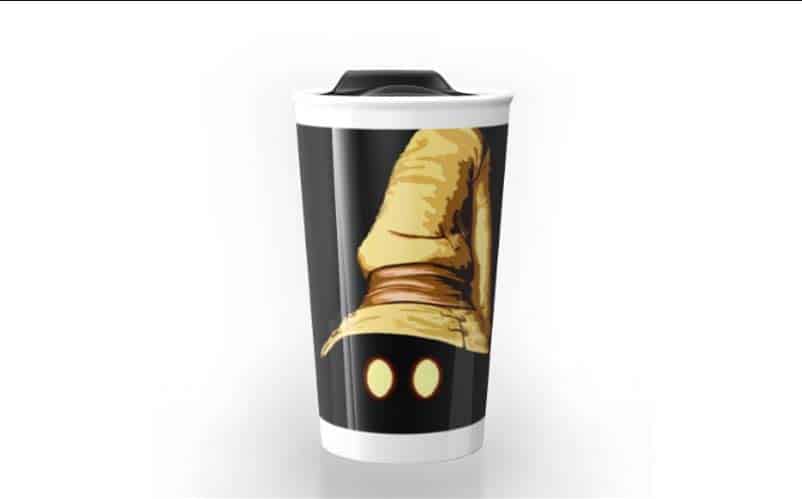 Vivi wields a multitude of staffs, black magic, and elemental magic. He also has the special ability Focus which allows him to boost his magic. If you need coffee to boost your productivity check out this Vivi mug with a suction sealing lid that keeps your beverage warm. The character also appears in Final Fantasy and Puzzle & Dragons. Vivi’s name comes from the Spanish verb “vivir” in English the characters name translates to “I lived”. Hopefully, this mug will liven you up a bit. 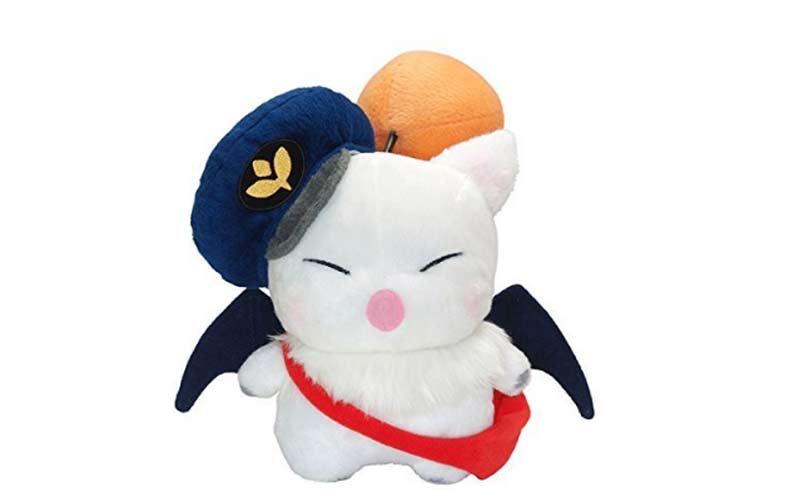 Originally bodyguards for the sage Doga, Moogles are a race that have appeared in every most of the major final Final Fantasy since their creation. Due to their small size, they tend to be good with gadgets and tinkering. With bat-like wings, pink or white fur, and pom poms on their heads these adorable creatures have captured the hearts of many. 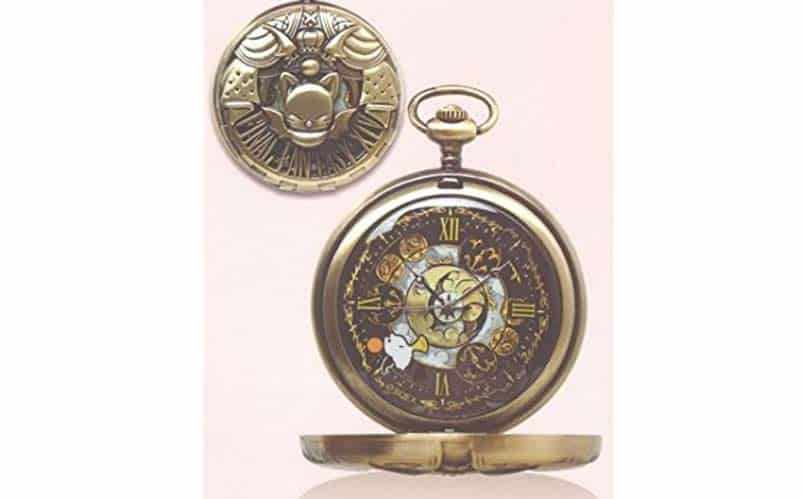 Moogles can speak with one another using telepathy and tend to stay away from most people though they do from time to time help travelers. If you’re looking to catch a glimpse of a Moogle from time to time check out this ornate pocket watch from Final Fantasy XIV. In a mini-game called Triple Triad, a card description for Moogles says:

“Do not be fooled by their winsome persona, for Moogles are a highly intelligent race of creatures capable of creating utter chaos with the unique brand of elemental magicks at their disposal”.

If plushes and watches are not for you, then perhaps a more useful item such as a lamp is what you need. The most popular of the Moogles is Mog who reappears throughout the series, though his role in each game varies. In Final Fantasy Crystal Chronicles he lights the way for players by carrying a crystal chalice. In Final Fantasy Record Keeper Dr. Mog is in charge of the library and drawing relics. 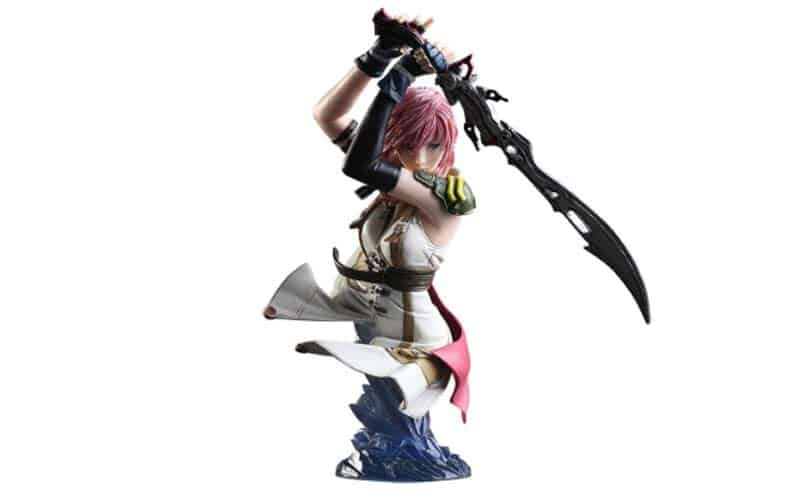 As the game’s second female protagonist Claire Farron, better known as Lightning, is trying to save her sister, Serah, in Final Fantasy XIII but this puts her hometown of Cacoon in danger. This woman with rose hair and pale blue eyes looks a lot like her mother. On her guardian uniform, the yellow stripes note her previous ranking as a sergeant. The bust above does a fantastic job of capturing beautiful details from those yellow stripes to patterns on her sword it certainly makes a stunning display piece. 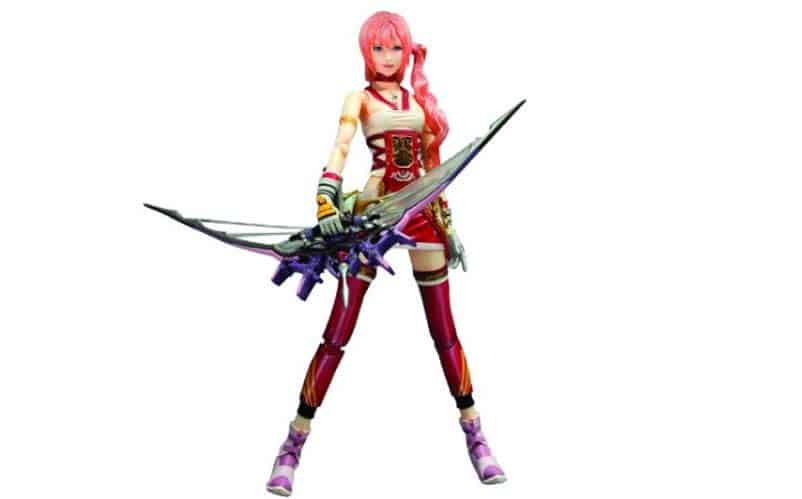 Speaking of Lightning’s little sister Serah, she is Snow’s fiance and her sister does not exactly approve of their relationship. She has seen some unfortunate events too and Lightning does not believe that Snow has done a good job of protecting her. However, Serah is capable of holding her own and worries about her older sister just as much. The cat shaped earrings she wears represent N.O.R.A, the rebel group which Snow is part of. The acronym stands for No Obligations, Rules, or Authority and they are in opposition to the Sanctum. 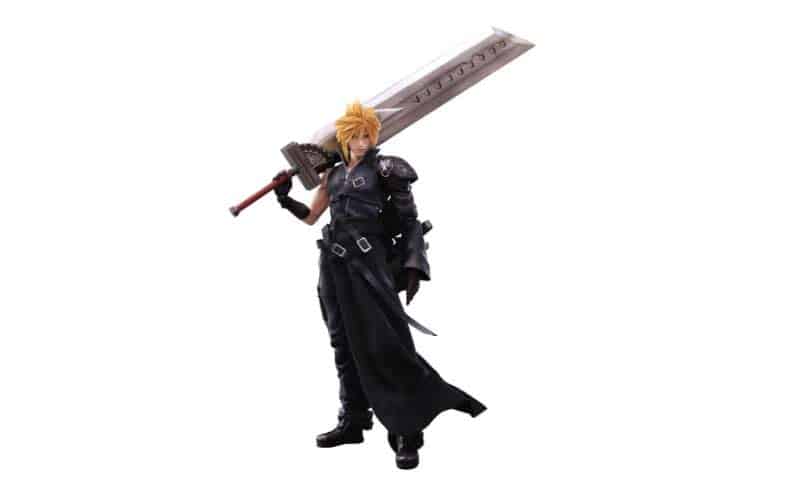 Now it is time for Cloud. Cloud is a mercenary for an eco-terrorist group known as AVALANCHE and he claims that he was part of SOLDIER a group of supersoldiers who worked for the Shinra Electrical Company but his memory of the past seems to be unclear. To avoid forgetting this iconic character why not get a detailed display figure of him to set up in your room. This one, in particular, shows a wide variety of his blades. 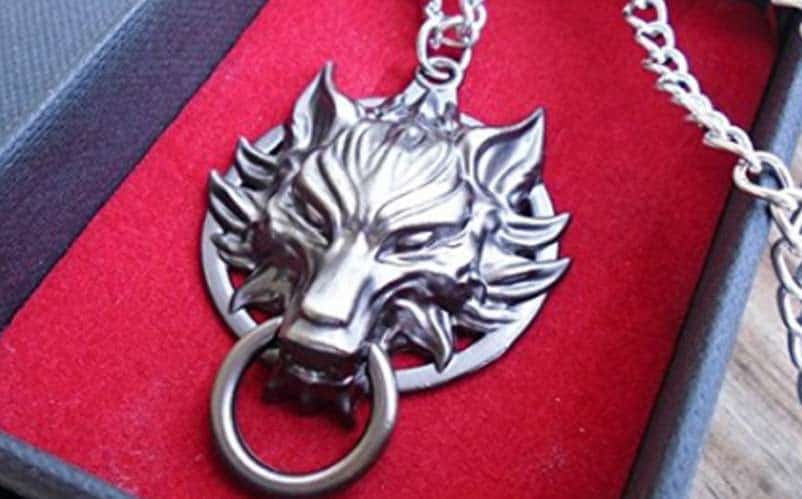 If display figures aren’t your thing why not wear the timber wolf Fenrir and think about Cloud’s lone wolf personality as he works to confront or escape problems without the help of others? Fenrir is seen several times in Final Fantasy. He appears as a summon, emblem, character, weapon, enemy, and even as a boss. He is depicted in Norse mythology as a monstrous creature and the son of Loki. 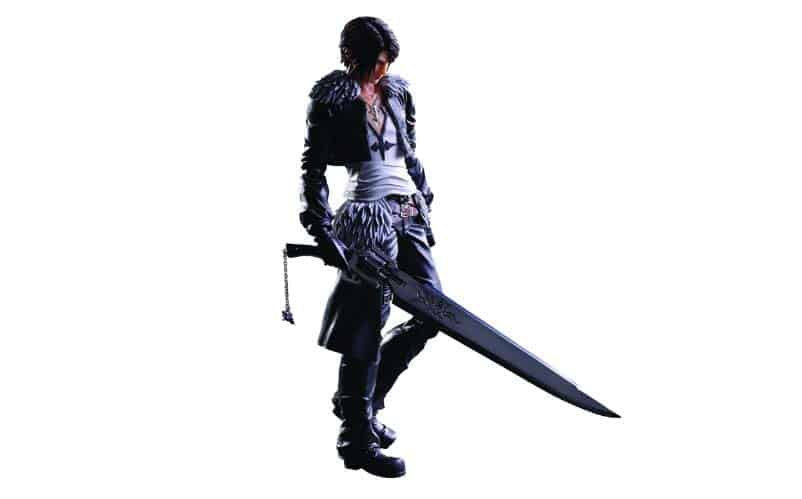 The teenage Squall Leonhart is the main protagonists in Final Fantasy VIII. Wearing his black leather bomber jacket with fur trim, black pants, and black boots, he wields his gunblade revolver. In Kingdom Hearts he is referred to as Leon, has grown up a bit and has longer hair. The introvert has been described as silent and a bit cold but he is still an effective leader that gets the jobs done. It is this trait the draws his friends toward him. The Squall Display Figure is releasing on February 22, and it can be preordered right now. 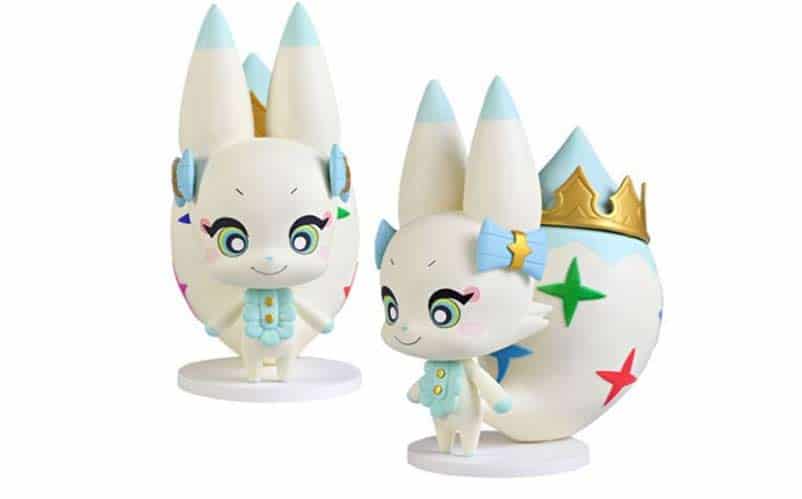 This talkative, fox-like mirage known as Tama comes from World of Final Fantasy and is a travel companion to Lann and her older twin sister Reynn. Wearing two bows and gold crown on her tail she has eight stars each a different color of the rainbow. She claims to smell like rainbows and really hates being called stinky. She tends to ride on Lana’s head. She also appears in the Final Fantasy TCG as well as the Triple Triad game. The Tama Figure will be available on June 21, 2017. 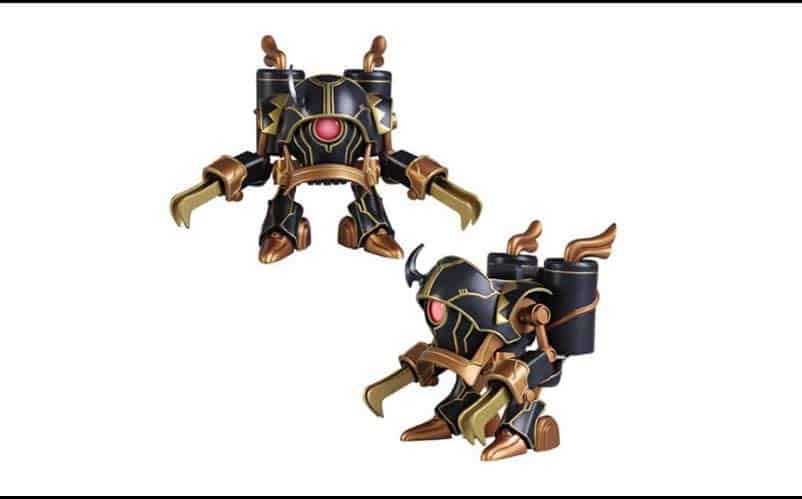 This technological device shows up in Final Fantasy VI and is used by Gesthalian Empire and it allows them to shoot beams of magical energy. Created by Cid Del Norte Marquez, they were made at the Magitek Research Facility in Vector. They show up in all of the cities and territories occupied by the empire, though foot soldiers are more prevalent. It tends to be worn by enemies in the game. They also appear in the Triple Triad game. The Magitek Figure Armor Figure will be available on June 30th, but it’s available for pre-order right now. 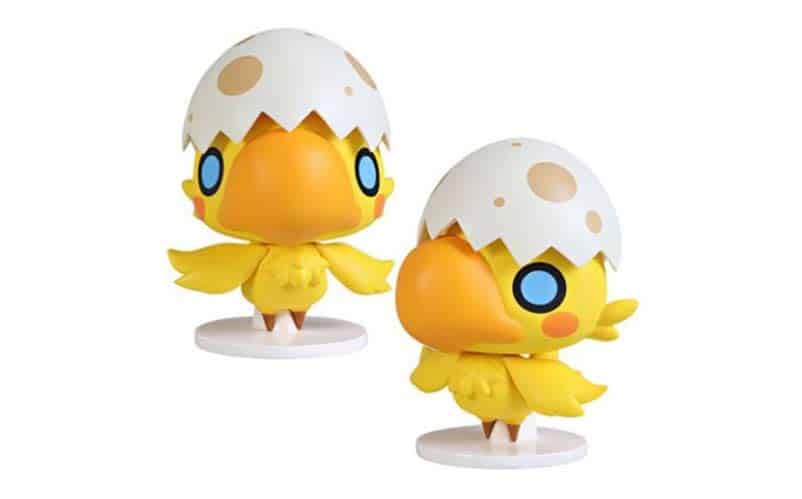 Chocobos function a lot like horses in the game. Many have been domesticated and can pull carriages and carts. Similarly, they aren’t known for smelling all that great. With their three-toed feet, long necks, and big wings they are capable of understanding human language. They can also run at over 20 mph. This adorable and freshly hatched baby Chocobo has a long way to grow before it is big enough to ride. They’ll also be available on June 30th. 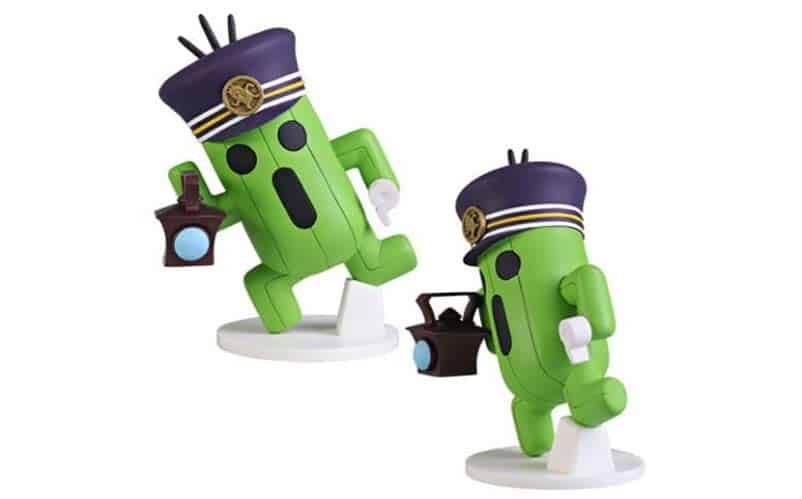 This is the Cactaur Conductor. In the World of Final Fantasy, he takes care of running all of the trains. He is the first Cactaur who can speak to player characters in their own language. At over 50 years old and enjoys playing pranks on people and other mirages. With its cap, lantern, and a whistle in hand this friendly conductor looks like he is ready to get his train on the run.