Fornite appears to be enjoying a resurgence of sorts lately. Epic Games was able to incorporate a free Battle Royale mode into their hero shooter. One that they admittedly barrowed from another upcoming franchise. And with it came a lot of curious fans (myself included) anxiously awaiting PlayerUnknown’s Battlegrounds to land on Xbox One.

So now there are a ton of new faces with Fortnite on their systems, why not try to lock them in with some cool new updates? Epic will begin doing just that with Fortnite’s Halloween Event beginning later this week.

Officially known as the Fortnitemares Event, it appears to be jammed packed with content. First is the introduction of a new zone within the game known as Hexsylvania. Here, Epic says you’ll “get lost in the deep levels of the catacombs, the endless halls of flickering candles or the thick fog creeping across the map.”

Within Hexsylvania players will embark on 25 new story quests within Fortnite. They’ll also have eight new Halloween themed Heroes in which to adventure with. You’ll use them to take down new enemies such as the Pumpkin Head Husk and the Vampire Taker. You’ll also have new weapons at your disposal too that include the Pumpkin Launcher and the Grave Digger.

As you watch through the trailer you’ll catch glimpses of some other cool “haunting new gear.” One is a trap that drops a load of large tires on the invading ghouls. And other is a cryo pit that freezes your enemies as they attempt to walk through it. “Shooter it, stab it or squash it,” our narrator says, “just don’t let those creeps win.”

Fortnite’s 1.8 update will officially roll out on Thursday, October 26th for PC, PlayStation 4 and Xbox One. You can checkout the game’s new Heroes below.There’s no better time to get yourself into the Halloween spirit. Happy ghost busting. 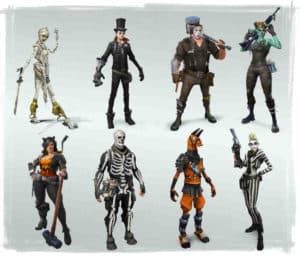