The juggernaut of film is crossing over with the juggernaut of games. Epic Games has announced a partnership with Marvel that will be bringing The Mad Titan, Thanos, into the next Limited Time Mode for Fortnite. 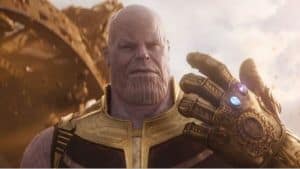 It’s unclear yet how Thanos will play within the game. EW broke the news first before Epic Games confirmed it via their Twitter account. They’ve indicated that the mode will be titled the Infinity Gauntlet Limited Time Mashup. And true to its name, the Infinity Gauntlet will be available as an item.

The idea for the collaboration apparently came from the Russo Brothers themselves. They’re huge fans of the game. They gave the following quote to EW:

“Over the past few months, while we were editing Infinity War, we’d take breaks to hop on and get in a few games. And then we started thinking, how cool would it be to have some kind of Avengers–Fortnite mashup? So we stalked Donald.”

Donald is the creative director for Epic Games. He then explained how the union came together from his perspective:

“Out of the blue, I get this call from Joe. And after a bit of geeking out over each other’s work, we start brainstorming these crazy ideas. It was really important that whatever we did, it had to be super authentic to both Fortnite and the Avengers: Infinity War, and something that fans of both would be excited about. About an hour later, we had the bones of this awesome idea for a limited time gameplay mode, and almost immediately our team got started.”

Epic will surely flesh out how the new Limited Time Mode will operate as we get closer to its launch tomorrow. All we know for now is that one Infinity Gauntlet will spawn within each game. Claiming it will transform you into Thanos and grant you all the powers that The Mad Titan has while wearing it. What that means in a game of Fortnite remains to be seen.