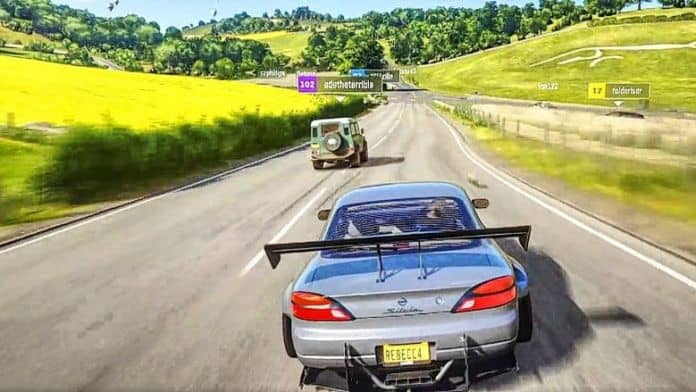 Today Playground Games showed off a ton of gameplay for Forza Horizon 4, an open-world racing game that sits somewhere between realistic sports sim and arcade racer. One of the big distinguishing details with this entry is the emphasis on seasons and how they’ll impact not just the drive but the events you can undertake.

Ralph Fulton, chief creative officer at Playground Games, and the team from take a closer look at seasons in Forza Horizon 4. Giving us some insights into how each season changes gameplay. This livestream was the first in a series of four weekly livestreams. The streams will feature never-before-seen gameplay and answers to community questions. Here is the first one and it takes an in-depth look at Summer.

Our friends over at Dualshockers break down some of the most poignant moments of the stream:

We get to see plenty of interesting elements including lots of driving, character and car customization, emotes, a glimpse of houses, breaking down a lot of walls, and even the return of drone mode.

Interestingly, we also saw the game played solo against drivatars, which is possible despite the fact that it’s “mostly online” as the developers said.

Speaking of character customization, there is no gender restriction on the clothes you can give your personal driver, so if you want to wear skirts on your male avatar, you can with no limitations.

It’s great seeing game companies take to social media and various platforms to market their games in an honest, down-to-earth manner. You’re never to big to do some internet gorilla marketing and that’s exactly the vibe I get from this livestream format.

In the comments section, some fans expressed frustration over not being able to toggle between seasons at will. It appears that players have some control over seasons but to do so they need to create an event and then set the season. When you go online it’ll switch back to the season it is for everyone else. Personally, I think that’s pretty cool and gives me a reason to keep playing the game.

We’re also hoping that Forza Horizon 4 will see some sort of similar DLC to the Hot Wheels expansion, because that was super cool.

What do all of you think of Forza Horizon 4 so far? Comment below.