Harry Potter Foundmi Trackers are the Magic Fix for Forgetfulness 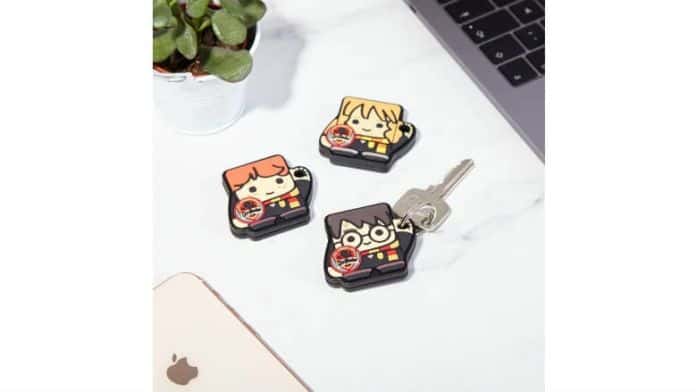 Do you have a habit of losing things? Often find yourself wondering where the hell you put your keys, wallet or phone? Well, the good people at Firebox have your back. The outlet is listing a set of Harry Potter Foundmi Trackers that can help you find your lost accessories quicker than an Elder Wand.

The Harry Potter Foundmi Trackers utilize Bluetooth technology in conjunction with their app to locate whatever it is that your missing. Each of the trackers holds their left arm up in a pose, and you can use that left hand to attached the tracker to your key ring, purse strap, or whatever else you fancy.

There is also a 3M adhesive sticker that comes along with these Harry Potter Foundmi Trackers. With it, you can apply one of these magical trackers directly to your phone or tablet if that’s the object you’re often on the hunt for.

For this particular set of Harry Potter Foundmi Trackers, we have the trio of main characters available. Those would be, of course, “The Boy Who Live” himself in Harry Potter. His best-mate Ron Weasley. And the genius that constantly saves their asses in Ms. Hermione Granger.

The Harry Potter Foundmi Trackers aren’t your only options though if you’d rather represent another iconic franchise. Back in May, Nerd Much? detailed a set of trackers that included Superman, Thor, Chewbacca, Wonder Woman, Deadpool, and more. Whether it’s Marvel, DC, Star Wars or another big name brand, Foundmi likely has the character that you’re looking for.

For these Harry Potter Foundmi Trackers though, Firebox has the geeky gadgets going for $31.99 in each of the three styles. If you’re looking to get the item shipped for Christmas, the site will handle the gift wrapping for you for a mere $4.99. Shipping cost is light too, coming in at just $3.42.

If you’ve got a forgetful Potter fan on your list this year. It certainly doesn’t get more magical – and practical – than this.