Microsoft has announced what the August Games with Gold slate will look like on Xbox One and Xbox 360. And this month, things are looking pretty, pretty good. 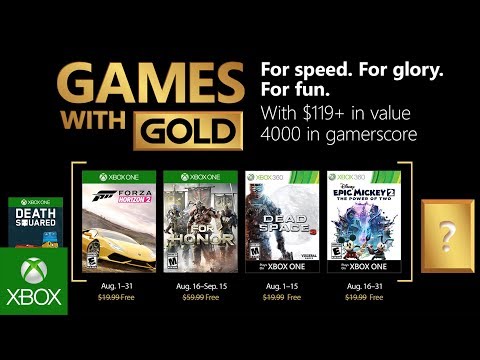 Starting on the Xbox 360 side of things this month brings us the inclusion of Dead Space 3 to the console. While still a quality outing, Visceral Games’ 3rd entry in the Dead Space series was considered weaker than its predecessors. The series shifted to be more action heavy as opposed to survival-horror elements the first two games were known for.

Still, if you’ve yet to round out the Dead Space trilogy, this one is worth a go on your 360 or Xbox One via backwards compatibility. Dead Space is available via the August Games with Gold program from August 1st through August 15th.

Our second 360 game this month is Disney Epic Mickey 2: The Power of Two. This game didn’t fare as well critically, coming in at a paltry 60% upon its release on the 360. Epic Mickey 2 performed so poorly that Disney Interactive canceled the planned third game of the would be trilogy. You can probably pass on this Mickey adventure unless your a big time fan of the first game.

The Xbox One side of things this month begins with Forza Horizon 2 Standard – 10th Anniversary Edition dropping into the library of those with Xbox Live Gold accounts. The title originally launched on both Xbox 360 and Xbox One in 2014. And it fared quite well critically, earning itself a Metacritic average of 86.

The game saw numerous quality expansions, including a Furious 7 tie-in with the game’s Forza Horizon 2 Presents Fast & Furious standalone DLC that was released. You’ll be able to nab Forza Horizon 2 from August 1st through August 31st.

Finally, coming within the August Games with Gold package is For Honor on Xbox One. This is one of the newer games to ever enter the program. It only released on the Xbox One in February of last year. It had a bumpy start, but thanks to continual patches by Ubisoft Montreal, For Honor has come into its own as a class based action fighter. It’s certainly worth checking out as a free download between August 16th and September 15th.

That rounds out our list for August. We’ll be back month with a fresh slate of titles that Microsoft is sending our way courtesy of the Games with Gold program.