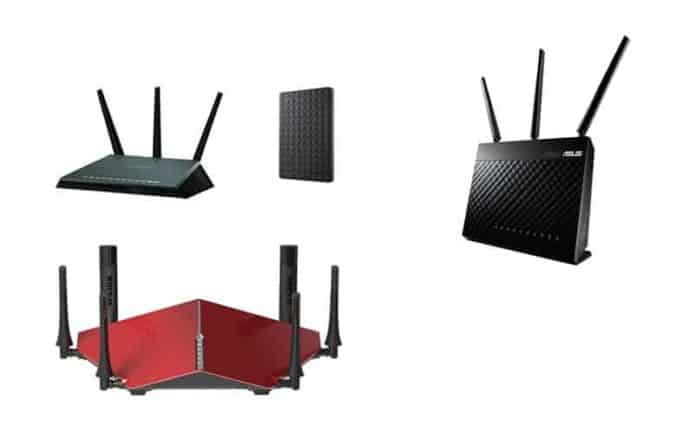 We all love having a home filled with connected devices. Between our desktops, laptops, tablets, gaming consoles and smartphones, many of us easily have at least six or seven devices connected to Wi-Fi (our count is 14, at the moment). And then, when your friends come over, they all ask, “Hey, what’s your Wi-Fi password?”

While the original PS4 doesn’t operate on 802.11 ac WiFi, the newer PS4 Slim models and the PS4 Pro both have 802.11ac. Also, the original Xbox One doesn’t have it enabled yet (although a teardown reveals it’s possible), although the Xbox One S and Xbox One X both use it. All of them are all still internet hogs, especially when downloading games and playing online, and the gaming routers below will help ensure that your network isn’t congested and your devices are getting top speeds.

The usual strain on your network while gaming usually comes from others in the household streaming, downloading, or gaming themselves. It’s not that your Xbox One or PS4 has a slow connection (unless, that IS the case because of the crappy router you currently own), but upgrading to one of these top-of-the-line gaming routers will help to soothe your Wi-Fi’s soul.

So without further ado, here are the top 3 best routers for PS4 and Xbox One:

Note: These routers are also great for PC gaming, so the same applies if you’re a PC gamer.

When it comes down to brand preference, we much prefer Netgear for our router needs. Over the past twelve years, I’ve mostly owned a Netgear router. Why? Mostly because they’re so easy to set-up and use, and they rarely malfunction or have any issues.

So, I might be biased when I recommend the Netgear Nighthawk AC1900 router, but it’s an impressive device that’s incredibly easy to setup. It has a 1GHz dual core processor, 256 MB of RAM, and it has a fantastic range (it’s great for larger homes). It can reach a combined speed of 1900Mbps. This Netgear router has high-powered amplifiers with 3 external antennas to maximize performance, so you’re able to get great WiFi speeds even when you’re not close to it. It also uses Airtime Fairness technology, which prevents network lag when older devices connect to it. And, it uses advanced beamforming+ which allows up to 100% performance improvement on your network. For even more speed, there’s always the Nighthawk AC3200, but you shouldn’t need that much power for a home network, and the price of the AC1900 is easier for your significant other to digest.

To make it easy to setup, Netgear uses the Netgear genie app that allows owners to monitor, control and repair their home network. If you’re into the whole DLNA/content sharing scene, the device will play your media, and you can set it up so that you’re able to wirelessly access and share media from a connected USB hard drive.

Security is, of course, important too, and the Nighthawk has VPN support, parental controls, guest network access, and other safety features to ensure a secured connection at all times. Amazon currently has a stellar deal that pairs this, one of the best routers for PS4 and Xbox One, with a 1TB external hard drive for just $10 more than the normal price of the router (normally $189). That means you won’t have to spend time or money looking for the best cheap Xbox One external hard drive on the market. Plus, it’s freakin’ called the Nighthawk — how cool is that?! 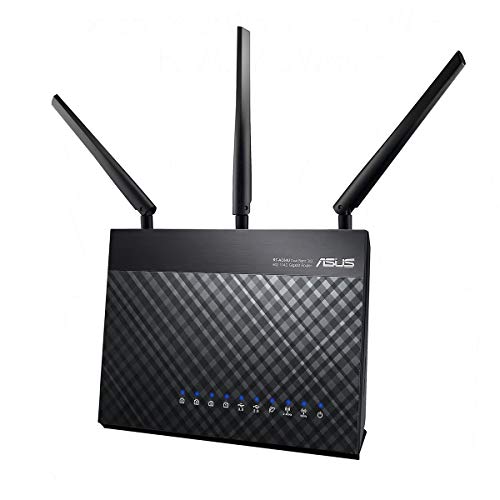 If you’re looking for something a little cheaper, check out the ASUS AC1900 Dual-Band Gigabit Router. Although it’s nearly $50 less than the Netgear AC1900, ASUS’s AC1900 is still one of the best routers for PS4 and Xbox One available, and it doesn’t sacrifice much.

This gaming router doesn’t have the cool look (or name) of the Nighthawk, but, of course, that isn’t one of the most important aspects of a router. And although it’s easy to set up, the Netgear has the genie app which makes it easier to troubleshoot than the ASUS. The speeds are the same; you’ll still get 1300Mbps when connected to 5G and 600Mbps over 2.4G. It also uses its own beamforming technology for maximum WiFi coverage, and it also has a dual-core processor.

In tests, the ASUS AC1900 is actually slightly faster than the Nighthawk, and it has a slightly larger coverage area. However, the connection on the Nighthawk is more stable with fewer hiccups, and with the ASUS, Amazon isn’t basically giving away a 1 TB external hard drive to go along with it.

If you’re looking for the creme de la creme of routers under $300, check out the D-Link AC3200 Ultra Tri-Band Router. Not only does it look like an absolute monster, but it can also achieve almost double the Wi-Fi speeds as the Nighthawk and ASUS, delivering faster speeds of up to 3200Mbps total. It has one 2.4GHz band intended for web surfing, Skype, printing, and the lower-speed requirement activities, and two separate 5GHz bands for HD media streaming, online gaming and connecting multiple devices. It uses a 1GHz Dual Core processor for faster network speed, as well as Smart Connect to prevent older devices from slowing down your wifi.

You’re able to game without any issues, stream to Twitch without any interruptions, and stream your HD movies on Netflix without any hiccups. It uses six high-performance external antennas to keep all of your devices connected, and even with your router on the other side of the house, your Xbox One and PS4 will have no problems with connecting.

Again, although it’s not all too important when it comes to router buying, the D-Link AC3200 looks the coolest out of the three, and it has the fastest wireless speeds of the three. But if there is usually only one gaming console running at a time in your home, and your family isn’t streaming Netflix on four different devices while you’re gaming online, then the price tag might hold you back, and you should probably just purchase the Nighthawk or ASUS. But if you have a family with two consoles running at once, Netflix marathons all day and internet downloading while you’re playing, the D-Link AC3200’s three bands really come in handy.