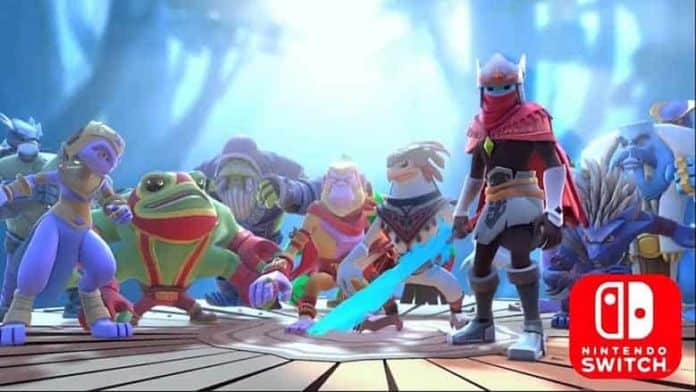 I’ll start out by saying that I’ve never been much of a Smash Bros. fan, instead opting for the more Capcom/SNK type of fighting game if I had to choose. But I’ve never denied that Nintendo’s darling fighter has its charm, and there is obviously some fun to be had there (obviously, because of its undeniable commercial and critical success). Brawlout is a new indie game that has been in Early Access on Steam for a while, and when we first played it, we noted that it was a promising fighting game that’s heavily-inspired by Smash Bros.

Now, Brawlout has made its way to the Nintendo Switch, serving as a stopgap until the next Smash Bros. hits. But does this indie game contain the heart of the beloved Nintendo fighting game, or is it nothing but a Chinese knock-off version?

Honestly, the answer lies somewhere in between those two options. Yes, I will tell you that Brawlout is worth the $20 price of admission, and you will love how it plays. At its core, it’s a brilliantly designed fighter that’s mechanically sound, pretty well-balanced, and aesthetically pleasing. But it isn’t without its issues, and those issues are a big stain on an otherwise solid offering. 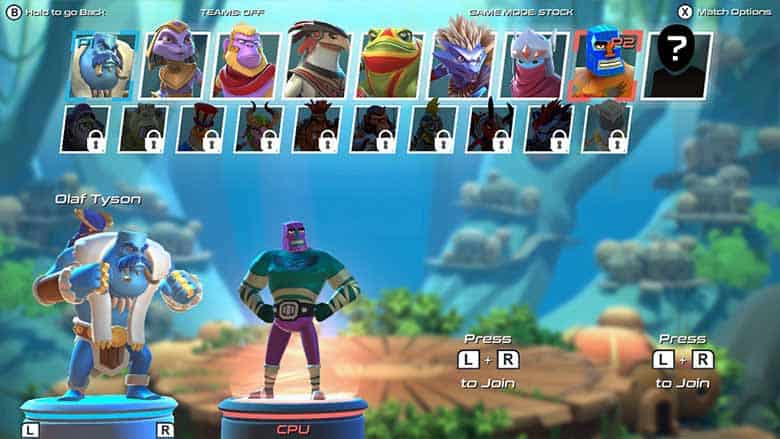 The first, and biggest issue, is that there are eighteen characters on the character select screen, but players are only able to choose from the first eight of those characters, with the rest being locked. Unfortunately, this isn’t a simple play-to-unlock more characters type of fighting game like you typically see. Instead, it’s basically a microtransaction hell that makes it so that it would take months for casual players to unlock more characters, but oddly enough, without the actual ability to buy that currency. Sure, you actually unlock everything by simply playing the game, but you only earn the specific currency you need to unlock characters through completing objectives, getting your mastery level for each character up, and collecting awards for doing things like completing every single task in the tutorial, winning matches online, and completing daily objectives. Once you’ve completed enough objectives and earned enough gems, you’re able to unlock a Brawler Piñata that only gives you a percentage chance of unlocking that character you might want. Instead, your only option is to grind it out, earn those gems, and try again. And again. And again, until eventually, you might get the character you want.

This is a miserable way of handling character unlocking, and it’s easily going to hold Brawlout back from living up to its true potential. In fact, it’s almost enough to make me not want to recommend picking up Brawlout on Switch, and if it weren’t for the fact that everything else about the game is pretty well-made, then we’d be a lot angrier about it than we actually are.

Secondly, there are too many items that have to be unlocked initially. You literally only start with three available stages to start, with the rest being locked. Three. Stages. What?!? 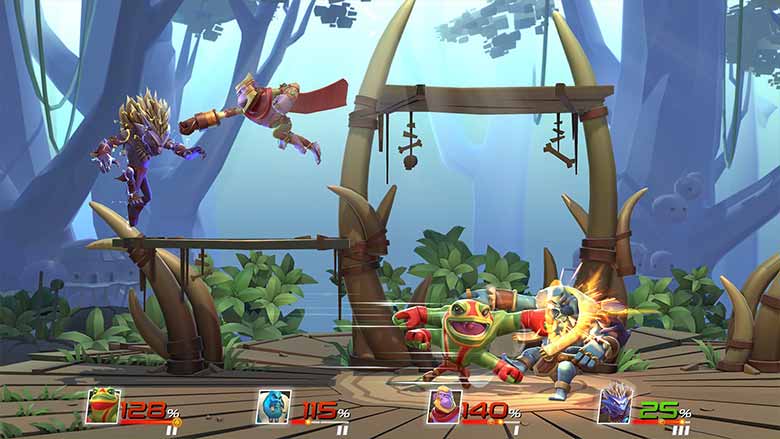 But when you set those couple of gripes aside, there is a lot of fun to be had with this game, and it will scratch that Smash Bros. itch. Each character has its own unique look, feel, and playstyle, and even in the initial eight characters you have to choose from, chances are you’ll find one that’s to your liking. Some examples include Volt, a Blanka-esque electricity-wielding hedgehog meets alligator-looking character, Olaf Tyson, a brass-knuckle wielding walrus with a mustache and legs, or King Apu, a small yet ferocious fighting purple monkey with a brass fist. The variety is certainly there, which is why it’s even more unfortunate that we can’t get our hands on the other characters for a little while. The Nintendo Switch version also has The Drifter from Hyper Light Drifter (great game, btw) and Juan from Guacamelee! (also a great game). We’d actually LOVE to see more of these sort of indie game icons enter into the mix, and we’re hoping Angry Mob Games will hear us on that one.

One of Brawlout’s major strong points is its presentation. It not only looks great, with brightly colored environments and cool-looking character models, and an attractive menu screen that’s easy to navigate, but its performance is also impressive. It runs at 1080p and 60 fps when docked, and 30 fps on the handheld. Best of all, I’ve been playing for a solid week and haven’t noticed a single dropped framerate. Seriously, each match is buttery smooth, and that’s incredibly important in a fighting game.

Brawlout also has a plethora of items to unlock, and most of which aren’t nearly as painful as the character unlocks are. There are skins, stages, taunts, avatars, and trail effects all waiting to be unlocked through leveling up each character’s mastery level and earning coins to buy piñatas with (the currency used for these is much easier to come by, as you earn them in each match whether you win or lose).

As far as gameplay is concerned, it plays just like Smash Bros., with damage working the same and the ability to knock-off other players to score a win. Each character has unique abilities, and although they’re limited in number, there’s the potential to create devastating combos.

Basically, I think Brawlout is off to a good start, and if it weren’t for that miserable character unlock model, I’d be a bit more enthusiastic about recommending it. But if you can look past its unfortunate misstep, this is a game with staying power. It has the same general feel as Smash Bros, but obviously, without the incredible lineup of characters that Nintendo has in its corner. It’s like a Diet Smash Bros, with the character unlock model leaving a bad taste in your mouth.