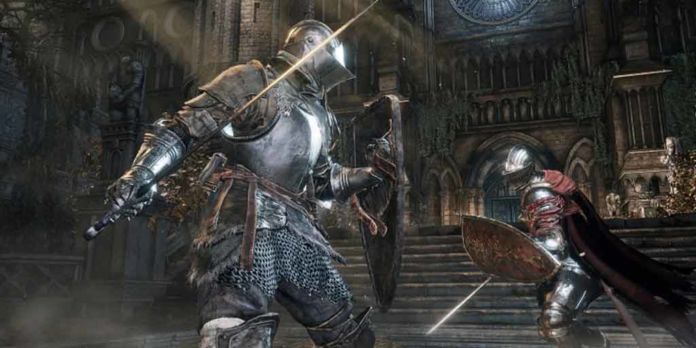 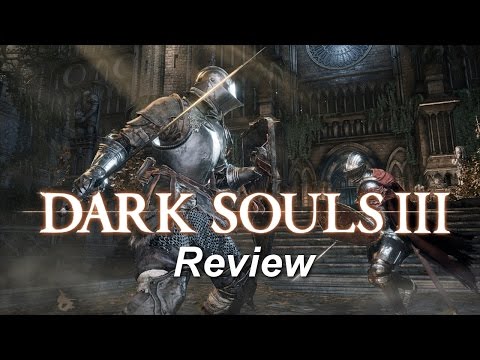 (Author’s Note: While I received an advanced copy of Dark Souls 3, I wanted to test the servers out on launch before publishing this review).

After fighting my way through an undead cathedral, I was depleted of both health and items. It took me ages to get this far, and when I finally stumbled upon a treasure chest, a sense of accomplishment washed over me. Rushing over, I grabbed the chest’s lid, threw it open, and it sprouted arms and devoured me on the spot. My arrogance cost me several thousand souls and the fun task of starting from the nearest bonfire, but I deserved it. This is Dark Souls 3, a game that demands respect from the player and is willing to strike you down hundreds of times until you understand that. As the third in the series (fourth if we are counting Bloodborne), Dark Souls 3 pulls the best aspects from its predecessors to deliver one hell of a send-off.

You play an undead soldier known as an Unkindled Ash, bent on returning the four Lords of Cinder to their thrones. The story, in typical Souls fashion, is excessively cryptic beyond that basic set-up. How much more you want to learn about the story and world around you will entirely depend on if you read the pages of item descriptions and speak to the various NPCs scattered across the grim landscape. Dialogue is minimum in most cases, which is a bit of a disappointment, given how memorable some of the characters you meet are. This is only enhanced by the great voice acting that helps give personality to each person you meet that’s tucked away in various areas. Dark Souls 3 is very much a get what you give type of game in terms of understanding the story and lore. There are deeper rivalries, stories, and motives behind each character, but you will only find these if you take the time to explore and talk.

Of course, you will need to fight your way through an avalanche of gothic horrors and rotting corpses for those conversations. Combat this time around takes inspiration from both Bloodborne‘s frantic speed and Dark Souls focus on exploiting a target’s weaknesses. Given the latter is typically a very slow paced endeavor, this punch of raw energy fused into the battles breathes new life into battles. Enemies are far more aggressive this time around, swarming you in packs while using viciously fast blows. There is rarely a chance to catch your breath once actually engaged, forcing you to focus on the enemy at hand and not what’s going on around you. Fighting is as much about utilizing opportunity as it is studying your foes attack patterns and committing them to memory. Whether attacking the sword arm of a shielded knight or picking off a group of mad villagers from a distance; Dark Souls 3 offers exceptionally dynamic and deep combat. This is only boosted by the staggering amount of weapons and magic your Unkindled can utilize. 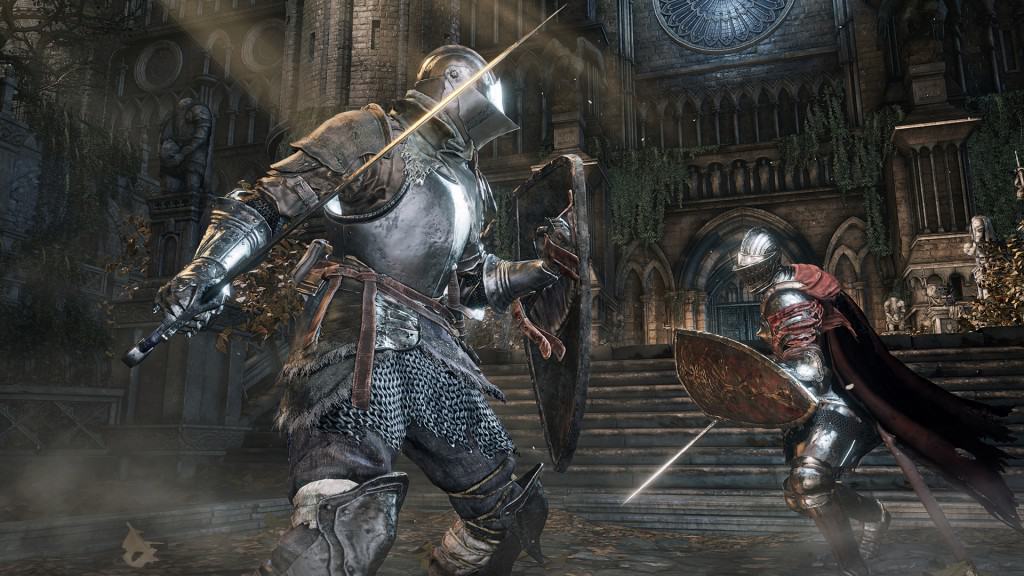 Speaking of your character, one of my biggest issues with the series is that using magic was a fairly exploitative way to kill enemies. This was mainly because a lot of the enemies were fairly slow and certain spells had incredible range. With the shift to faster more aggressive A.I., magic now requires more forethought before just spamming a torrent of magic. All of the various classes you can delve into feel balanced and are all viable options for complete playthroughs. Dark Souls 3 also allows a character to reassign their skill points later on in the game, so you never have to fully commit to one style if you find yourself disliking it. Despite this being one of the hardest games in the Souls series, it arguably is also one of the most user-friendly. While some item uses are fairly hidden away, there was never a point where the game made me feel completely lost on what to do or where to go next.

This, of course, is thanks to the superb level design implemented into Dark Souls 3. Areas feel like giant mazes, all expertly interconnected through hidden walkways, passages, and grandiose doors. You may stumble upon a new door or fall through some rotting floorboards only to find yourself in an area you have never visited before. Discovery is at the heart of Dark Souls 3, as the game almost has an obsessive way of hiding items in every single corner or location that’s entirely out of your way. Your willingness to claim these rewards will always come at the cost of risking your life (and precious souls) as the best materials are usually guarded by a powerful enemy.

However, no enemies are as powerful as Dark Souls 3 impressive roster of bosses. These are not just giant lumber beasts you can stab hundred times until they fall over, but they impose challenges — for the most part, at least. Bosses now have two stages, each that can both subtly or drastically change the way you go about fighting them. One boss summons illusions of himself that fire magic projectiles at you once he reaches 50% of his health, forcing you to take a slower more methodical approach in finishing him off. Others challenge everything you’ve learned, facing off in a style more akin to a veteran PvP player than a powerful boss. It’s rare you will come across a boss that doesn’t bring something new to the table, but a few seem far too rudimentary in the way to kill them. Some of the bosses are just a simple game of attack a specific weak point until they die, which robs a bit of the challenge these creatures should bring. 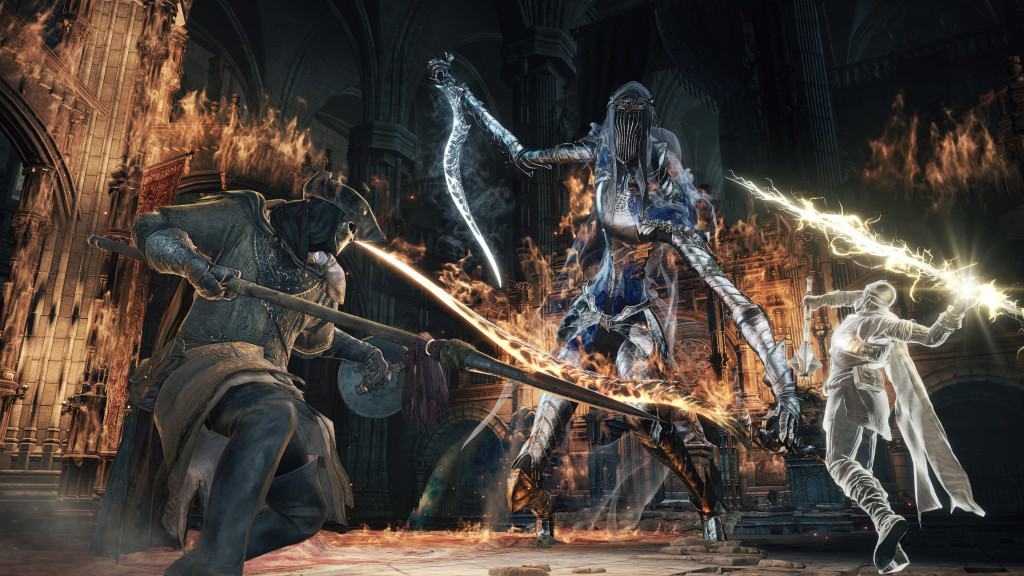 I wanted to wait until the servers went up to fully test the online experience, as the PS4 version we tested felt slightly barren at times. Thankfully, Dark Souls 3 brings the unique and fun player versus player battles with no server issues at all. There is a nice fluidity to the online component, as even if you are adventuring alone, you never feel totally isolated. Helpful notes are scattered across the world from other players (you may even find mine about that damn Mimic!) offering advice to those who may not know how to get past a certain area.

Sadly, technical issues have sapped some of the fun out of the experience, as the unpatched version of the game has some glaring problems. The framerate at times is ludicrous, as you can feel the game straining to try and keep up. This is especially noticeable during certain boss battles, where a dip in the framerate could rob you of that perfect dodge you needed. It has a bad habit of removing you from the world, but thankfully, after the patch updates, this problem was far less frequent, but it makes me wonder how such a glaring issue got the green light in the first place.

Dark Souls 3, is a journey I won’t likely forget anytime soon. While it was not as polished as its pseudo cousin Bloodborne, the amazing world design and mix of combat more than made up for this. If this really is the last in the Souls series, this was more than a fitting send off. This is a masterfully crafted game with both beautiful and haunting locations to discover, plunder, and die in. Praise the sun, Dark Souls 3 is a journey worth taking.