Just announced by Modus Games and the developers at Moodrop is their upcoming 2D cooperative platformer, Degrees of Separation. It’s an indie title that centers on two characters with the elemental powers of hot and cold, and the game uses those powers to incorporate various platforming and puzzle challenges based upon them. 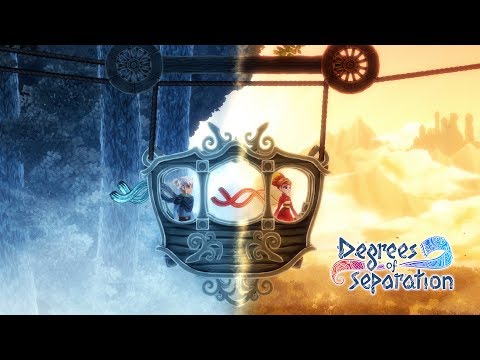 The title revolves around the two playable characters in Ember and Rime. Ember is the female character with the power of heat. And Rime is the male that has the ability to wield cold. The duo can work separately as necessary, or, combine their powers to help them advance. Modus teases that together “their powers take on an even greater impact, blending to create controllable gusts of wind, frozen rivers, or platforms where there previously were none.”

The art direction for the game is quite beautiful with its 2D animation and 3D backgrounds. You’ll witness the environments constantly evolve around you as Ember and Rime navigate the various terrain.

Storytelling is also something that Modus Games and Moondrop are touting. The narrative was penned by Chris Avellone. Avellone has been lauded previously for his efforts on Fallout: New Vegas, Star Wars Knights of the Old Republic 2, and Neverwinter Nights 2. The writer’s story “blends together a gentle-yet-powerful message about the magnetic potential of opposing forces, propelled by atmospheric puzzle-solving in a beautifully realized storybook world.”

If you don’t have a friend or loved one to share the game with, Degrees of Separation allows for single player adventuring as well. So just because you’re a loner doesn’t mean you’ll miss out on what looks to be a fantastic adventure. The game arrives for PC, PlayStation 4, Xbox One and Nintendo Switch on February 14th. So it’s the perfect companion piece to top off your Valentine’s Day.