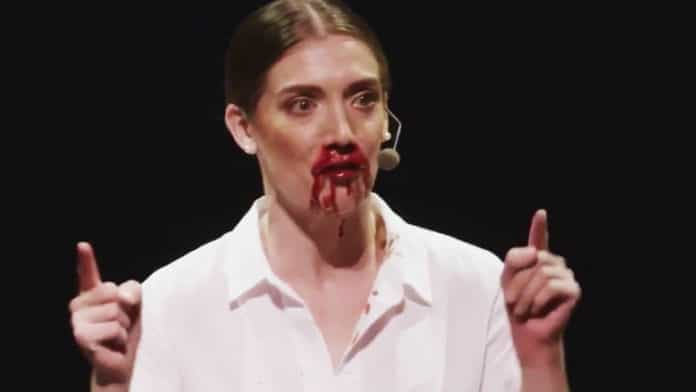 Following EA’s confirmation yesterday that the publisher wouldn’t be hosting an E3 2019 press conference, Devolver Digital is here to prove that E3 conferences aren’t falling by the wayside – kind of. The indie publisher confirmed via Twitter that they fully intend to do a press conference of their own once again this year. Even though what they put out there isn’t your typical press conference.

FWIW we’re still going to do an E3 press conference.

The Devolver Digital E3 press conferences of the last few years have been something… special. While they’re designed to give off the illusion that their being streamed live, they’re actually prerecorded presentations that are more about absurdity and show than showcase.

During the last few outings, the Devolver Digital E3 press conference has been led by actress Mahria Zook. However, Zook takes the stage under the guise of Chief Synergy Officer for the publisher, Nina Struthers.

Sure, there are some game reveals scattered about during Devolver’s E3 press conferences. But the majority of the time on stage is about pure, sometimes bloody, spectacle — spectacle that typically leads to headlines due to its sheer absurdity, so job well done to the marketing team over there.

As a publisher of indie titles, Devolver Digital has been killing it of late. Within their portfolio have been some truly stand out games of the last year or so. In 2018 they and their partnering studios received acclaim for The Messenger and Gris. And Ape Out has already achieved critical acclaim for the studio even though we’re still early in 2019.

We’ll have to wait and see whether the Devolver Digital E3 2019 press conference proves to be more about stage presence or games, but there will surely be both. And with the track record the publisher has been putting together these last few years, both should be something to watch out for.