After seeing the game time after time over the last four or so years, it began to feel like Dreams would never become a reality. Then, something magical finally happened. The game went into a beta for a select few late last year. And by most accounts, it was pretty amazing. Soon, the rest of the world will get to bring their creativity to the community. Sony has announced the Dreams Early Access launch date, slating it for next month. 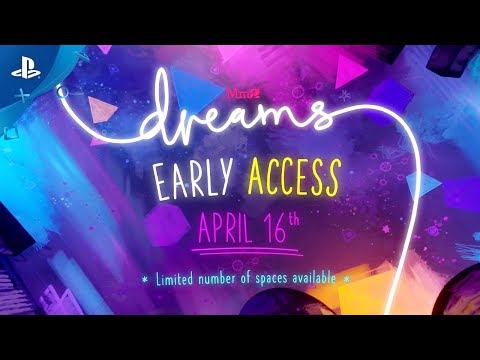 It feels as though the wait for Media Molecule’s Dreams has been exhaustive. It was revealed by the studio in the summer of 2014. Though at the time no one knew what the hell it was they were seeing. Then, at E3 2015, Dreams was officially announced. We’ve seen it continually evolve in the years since. With a near final product finally arriving in the form of the Dreams Early Access launch on April 16th.

To get into the Dreams Early Access launch, you simply need to purchase the Early Access version of the game for $29.99 from the PlayStation Store. This will only include the creation suite of the game.

The studio says the Early Access package will include “our full tool set for creating, our interactive tutorials and arcade games, templates and additional content created by Media Molecule and access to what you, the CoMmunity, made during our Dreams Creator Beta.” They also promise “first hands-on with new features and content as we add them.”

There’s a story mode coming to Dreams, but the developers are holding that back until the final version is ready to launch. They also confirm that a VR component is still in the works “and we’re super excited for it”, but that will be reserved for the full release as well. Though they did confirm that those that purchase Dreams Early Access will get the full version of the game at launch for free.

Media Molecule warns that the game’s Early Access version won’t be available to everyone. They state that “Dreams Early Access is limited yes, but it’s a big limit. That being said, to avoid disappointment, we do recommend you purchase as soon as you can to enjoy all of the creator tools available.”

They also won’t commit to a full release date for the game as of yet. And we probably won’t get that date for some time with Sony deciding not to show up to E3 this year.