The Fall of Call of Duty & the Rise of Battlefield 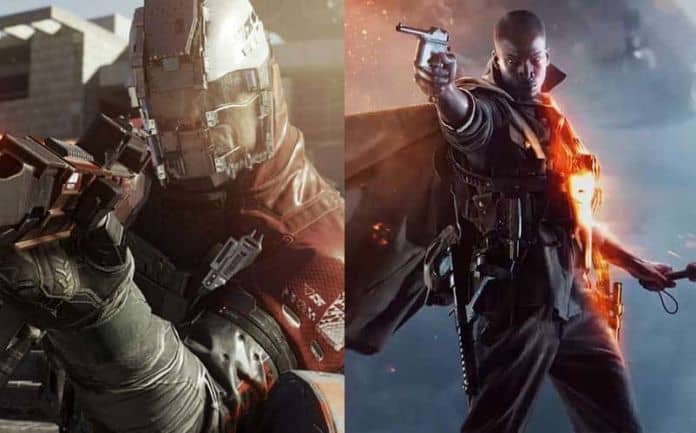 Instead of simply tucking its tail between its legs like it appears to do year after year, Battlefield appears to have some fight in it in 2016, while Call of Duty appears to be phoning it in because, well, they can.

Now, the gaming community has already expressed its fatigue with the Call of Duty franchise in the past. After all, the franchise has been around since 2003 and has had a yearly release ever since. The problem is that even its latest outing, Black Ops 3, has sold an astronomical number of copies, raking in more than $550 million in sales in just its first three days alone and going on to sell over 23.4 million copies globally. So, even though the general consensus is that Call of Duty has gone off the deep end, we’re still buying it. But, with Call of Duty: Infinite Warfare, things feel different.

In fact, following the official Infinite Warfare reveal trailer, longtime fans of the franchise took to social media to voice their dissatisfaction about its sci-fi elements (You know, because the one thing we all want in our Call of Duty is space battles!) and the fact that the remastered Modern Warfare allegedly isn’t going to be sold as a standalone product and that fans would have to pay $80 to get it. The community was so outraged, that they took their battle right to the official Call of Duty YouTube channel by disliking the new Infinite Warfare trailer, with over 620,000 fans giving it a thumbs down. By now, we’ve all heard and read about hardcore fans who say they’re not even going to bother purchasing CoD this year. And, these aren’t casual fans by any means; I’ve seen quite a number of dedicated fans simply throw their hands up with this one.

Activision responded to the mass dislikes on their investors call yesterday, noting that the Black Ops 2 trailer had the most dislikes out of any of their reveal trailers, and it went on to be their most successful game ever. You know, because the gaming community absolutely loves to be told that they’re just wrong about their thoughts and feelings on a game.

If you take a look at historical Call of Duty sales data (in units sold), it looks like this:

Don’t get me wrong, either; I’ve been a huge Call of Duty fanboy for over 10 years, and anyone who knows me can attest to that. But like so many others, Advanced Warfare really made me take a step back from the franchise. Despite the fact that it’s a good game in its own right, Exosuits are not something I want in my CoD.

Yesterday, nearly a week after Activision revealed Call of Duty 2016, EA and DICE held a Battlefield 5 (which we now know to be Battlefield 1) reveal event, streaming live on YouTube and Twitch to millions around the globe. If you look at the reveal on the official Battlefield YouTube, that trailer now has over 486,000 likes, and just 9.7K dislikes. Fans of the shooter genre tweeted their appreciation for the trailer — especially its great song choice — and the entire idea and existence of Battlefield 1. While Call of Duty continues to go further into left field, Battlefield appears to be scaling it back, bringing a grittier (dare I say, more Visceral) and much more grounded experience to gamers.

Of course, it’s not like the Battlefield franchise exactly has been doing well lately, with its latest outing, Hardline, selling a measly 4.10 million units globally.  But let’s take it back to Battlefield 3, which in my opinion is the franchise’s current pinnacle. The game sold over 17 million copies. Battlefield 4? 13.8 million. Even at its best, the series continually gets beat out by its biggest competitor, Call of Duty. This year, however, I wouldn’t be surprised if Battlefield 1 sells more units than Call of Duty: Infinite Warfare.

But after yesterday’s reveal, it’s clear that a major change is upon us in the wonderful world of military shooters. The general aura surrounding Infinite Warfare is that Activision has made a giant mistake by going the sci-fi route, and the general feel about Battlefield 1 is that it’s the second coming of Christ, himself, somehow imbued in video game form. The trailer was met with immediate praise, and the gaming community, in general, are excited to get into some warfare set in WW1. And as far as Infinite Warfare is concerned, it appears to be dead on arrival, and unless Activision decides to sell the Modern Warfare remastered as a standalone game this year, they’re in for a rude awakening this holiday season; the real fall of Call of Duty is upon us.

What do YOU think? Is the fall of Call of Duty finally here? Sound off in the comments to let us know your thoughts — we’d love to hear from our readers.