Fast RMX Will Bring Out Your Inner Completionist 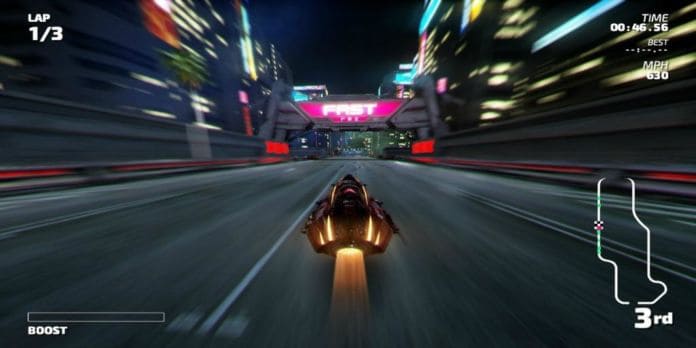 I’ve played Fast RMX ,on the Nintendo Switch, for hours and all I want is more people to play it. 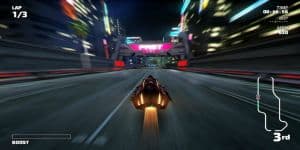 Fast RMX developer, Shin’en, describes this game as “the fastest racing game you may have ever experienced” and you’ll be hard pressed to find one that goes much faster. There are boost strips throughout each course and manual boosts you can execute at any time (provided you have some fuel in your meter).

And at 60 FPS and up to 1080p you are straight zooming in one of the most beautiful racing games I’ve ever played.

Fans of arcade racers and console classics, like F-Zero, will feel right at home with Fast RMX. I bought this game because I wanted (and always want) a basic racing game that offers split-screen multiplayer. By this I mean, when it comes to racing games I’m personally not looking for realistic simulations or groundbreaking work. I’m more Need for Speed than Forza Motorsport.

This isn’t to say “unrealistic” racers are automatically low-quality; rather, they’re often more novelty than revolutionary. I wasn’t expecting, and didn’t need, much from Fast RMX. That said, this game surprised me. In fact, it’s the only racing game I enjoy playing alone (against the A.I). 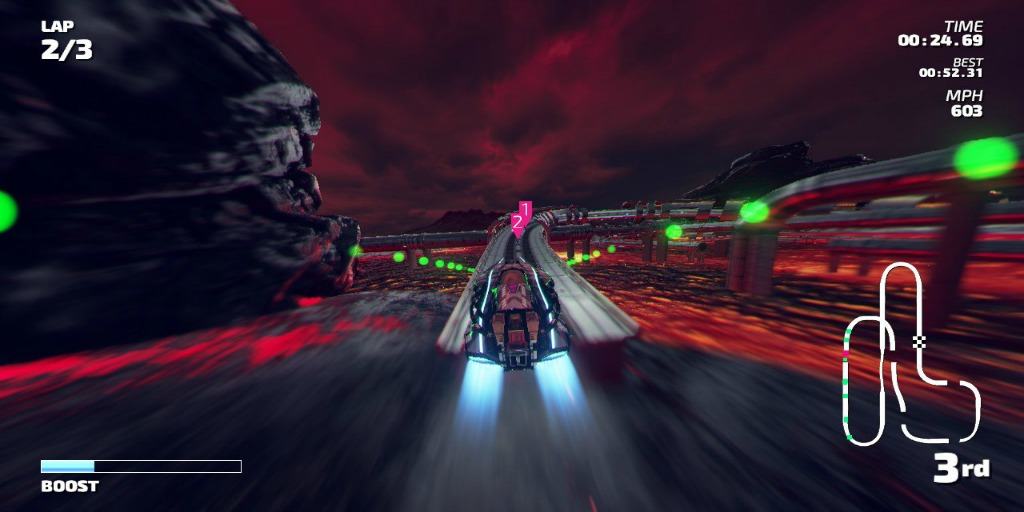 I love Fast RMX because it’s a fun game to play. What it does, it does well: entertaining tracks, futuristic cars, and enough challenge to keep you coming back.

And, for the past few weeks, that’s exactly what I’ve been doing. I’m not usually a completionist but I just want to max out everything in this game. Here’s why:

One of the biggest praises the Nintendo Switch is receiving right now, and rightfully so, is how easy it is to go in and out of a game. The console is basically always in sleep mode and all games launch very quickly. The user interface (UI) isn’t perfect and, like many gamers, I’m still waiting for more aps, a virtual console, etc. But it’s the easiest, smoothest UI I’ve experienced on a console. And, of course, Fast RMX is no exception to the Switch’s speed.

The game itself consists of 3 modes:

It’s so easy to pick up my Nintendo Switch, in handheld mode, and do a quick tournament in Championship mode (approx 8 mins) or a take on an individual race in Hero Mode (2-3 minutes). And, I was happy to hear that an update is coming tomorrow (4/19) that will add an additional mode and an improved online experience: 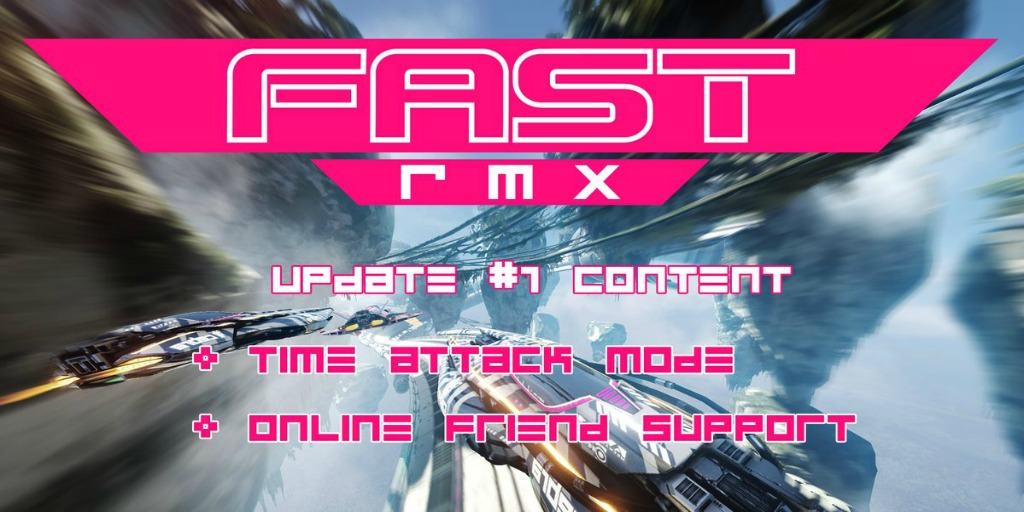 The learning curve is easy…

While accomplishing your Fast RMX goals can be hard, playing Fast RMX is quite easy. I recently played with a friend, a gamer who does not own a Switch, and getting her up to speed was simple.

In Fast RMX you choose from a variety of cars that vary in acceleration, speed, boost, and weight but for the most part I just race with Cebra, the first car in the bunch. Each track has orange and blue boost strips; to use the boost strips the glow under your car must match the color of the boost strip. You can change your color by pressing X (or up on the “D-pad” when using the Joy-Con).

You can also boost whenever you want, provided you have something in your boost meter. There are glowing orbs throughout the track that fill your boost meter. You can boost by pressing R (or clicking the joy-stick when using the Joy-Con). The back triggers can shift your car left/right respectively. You can also bump other racers, causing them to spin out. The easiest way to do this is to boost into them.

…mastery is anything but easy (even on easy mode).

There’s a total of 30 tracks and 15 cars to unlock. From your humble beginnings racing through an asteroid belt to a rain so heavy you can barely see two feet in front of you: Fast RMX has some unforgiving (and debatably unfair) tracks. 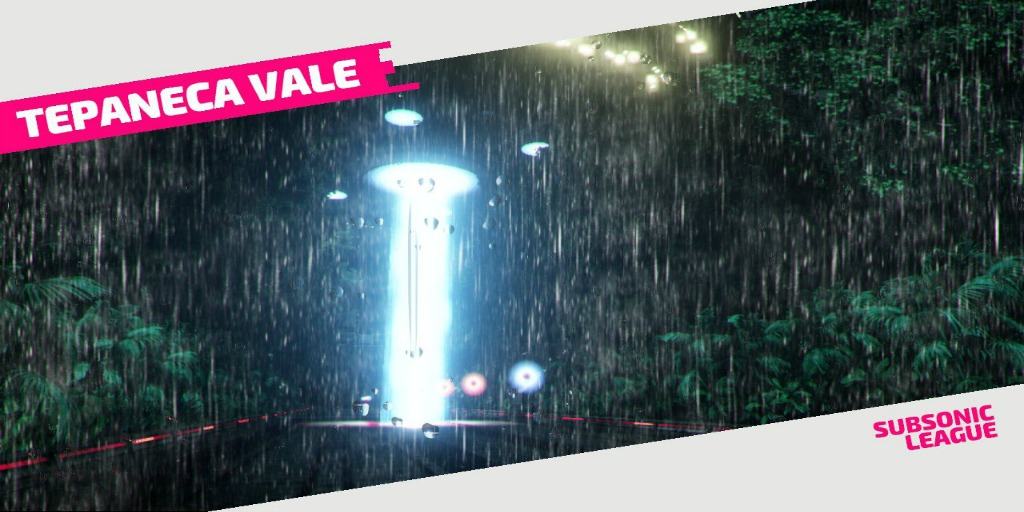 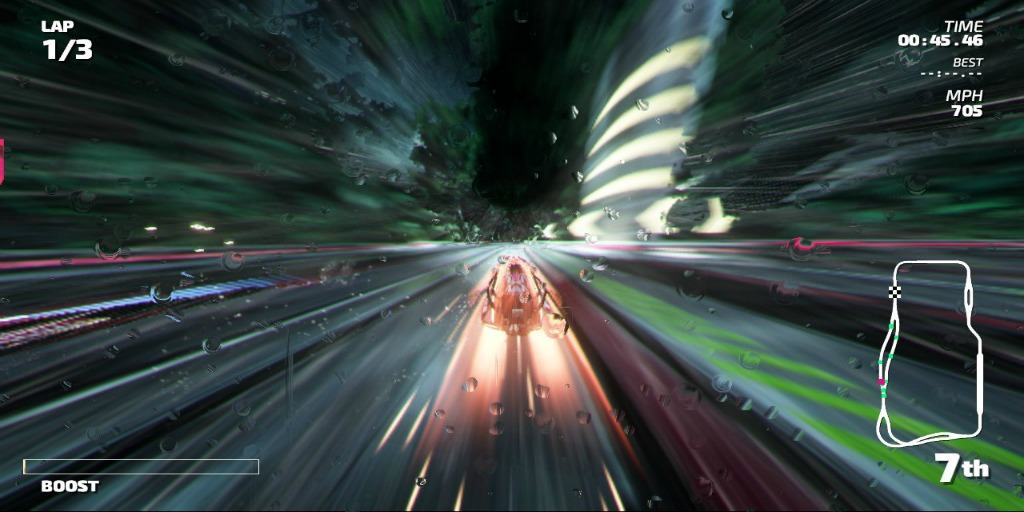 Even the most seasoned players will be forced to try again. While some gamers may cite some of these challenges as “poor design” I begrudgingly disagree.

I won’t lie to you: I spent over an hour straight trying to rank #1 in the the Thallium cup on the game’s easiest mode (Subsonic: Novice). I know this because I listened to the album “1992,” by The Game, from front to back during these consecutive attempts. The cup lasts approximately 8 minutes meaning I went through these same 3 races over 7 times in a row. So yes, the game started to feel a bit unfair… but design wise, if I’m being honest, I do think it holds up. If you know the tracks, understand the timing, how jumps work, when to boost, you’ll be able to navigate the common pitfalls that can come off as “unfair.”

In games like this, I normally unlock all the cups and call it a day. I buy these games for the split-screen multiplayer and not much else. Yet, here I am, 10+ hrs in and I can’t bring myself to stop. Nor do I want to because Fast RMX documents my successes, and failures, so well that I’m compelled to see my ranking go up. Which brings me to my next point

Your ranking is staring at you in Fast RMX: 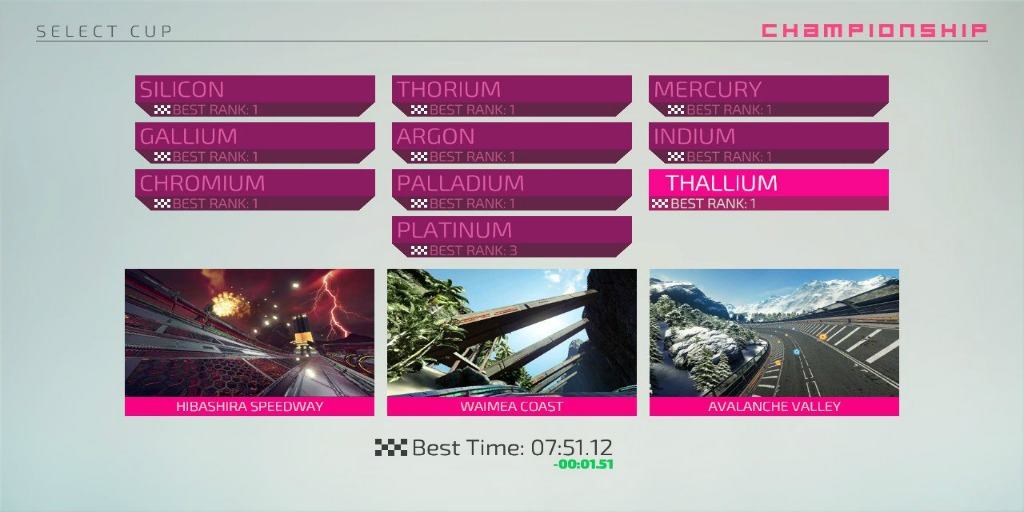 The HD Rumble is LOUD. Probably a little too loud, but I like that. It reminds me of sitting back in those arcade racing game chairs: the kind where the screen is a foot from your face and you can’t help but laugh in amusement at how grandiose this is.

The only game that makes me feel like my TV is gigantic. The game that overwhelms me with its speed, beauty, and ridiculousness–it even has that cheesy arcade voiceover shouting buzzwords and catchphrases (“LEGENDARY!”).

At first glance, Fast RMX may seem like a run of the mill game but give it a chance and you’ll be surprised how quickly it joins your go-to gaming roster.

For more on Fast RMX, check out our review.

Previous article
What if GTA 6 Has a Sci-Fi Theme?
Next article
WildStar Studio Working On New Game (Rumor)