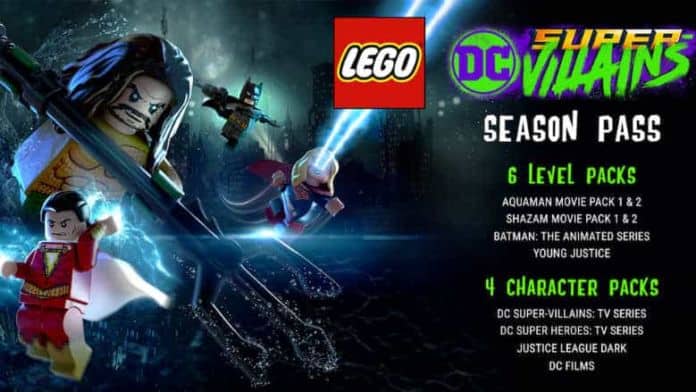 Warner Bros. Interactive Entertainment dropped the details today as to what’s to be included in the upcoming Lego DC Super Villains Season Pass. The content will include new characters, level packs and more.

DC is working on its brand synergy with the Lego DC Super Villains Season Pass. 2 of the game’s upcoming level packs will be based upon December’s Aquaman movie. And another 2 will revolve around April’s Shazam!.

There will also be DLC within the Lego DC Super Villains Season Pass to celebrate the brand’s various movies. No details were given, just a name – the DC Films Character Pack. Level Packs are also confirmed which revolve around Batman: The Animated Series and Young Justice.

The game itself revolves around a super villain that you yourself will create. You’re mentor, of all people, is none other than Joker. And one of the main antagonists is Darkseid. He isn’t the only problem though, here’s how the story shakes out:

“In Lego DC Super Villains, the Justice League has disappeared, leaving Earth’s protection to a newcomer group of heroes from a parallel universe, proclaiming themselves as the ‘Justice Syndicate’. Renowned DC Super Villains from the ‘Legion Of Doom’ discover Earth’s newest heroes may not be the heroes they claim to be.”