For all of you that thought Nintendo’s support of Kart was over, think again. The publisher has announced that a Mario Kart 8 Deluxe Breath of the Wild update is racing your way. 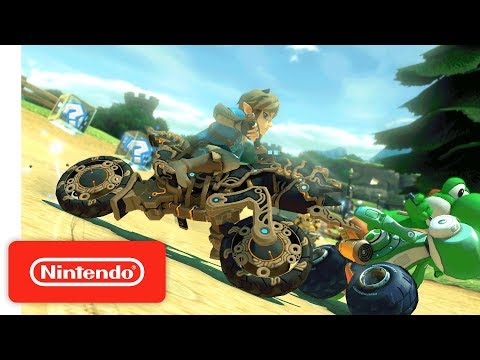 The game’s latest patch will be free to all players. Version 1.6 will update Link’s look to provide him with his blue Champion’s Tunic. A set of Ancient Tires come included too, as well as the hero’s paraglider from his latest adventure. Coolest of all is the addition of Link’s Master Cycle Zero which made its debut within Breath of the Wild’s Champion’s Ballad DLC.

What’s perhaps most exciting about the Mario Kart 8 Deluxe Breath of the Wild update is the fact that Nintendo is confirming they aren’t finished with their latest installment of the series. With the Nintendo Switch Online service going live here soon, Nintendo could drive big interest in the online subscription should they put something like a big Mario Kart 8 Deluxe update behind it.

Hypothetically speaking, let’s say that Nintendo offered 4 brand new tracks for those that sign up for a year of service. That would be a huge selling point, and an easy way to get people back into Kart and onto Nintendo’s online servers. While Mario Kart 9 is a no brainer at some point, it’s not really necessary right now. Mario Kart 8 Deluxe is fantastic on Switch. With long term support, it could have a healthy fan base on the console for the duration of the generation.

We’ll have to wait and see whether this Mario Kart 8 Deluxe Breath of the Wild update is a hint of things to come or merely a generous offering in support of the most critically acclaimed game on Switch. Hopefully it’s the former, with more content coming our way down the line.