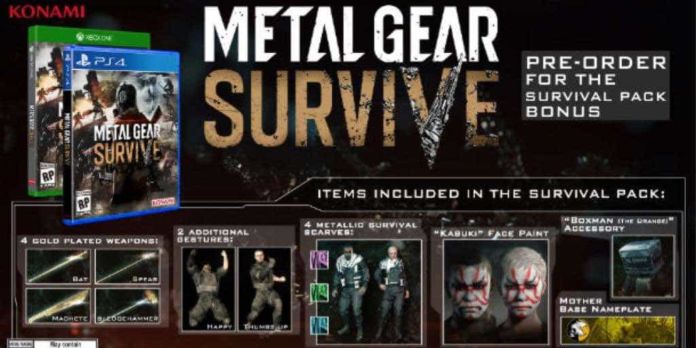 Announced by Konami today are the bonuses you can get for pre-ordering the PS4 and Xbox One versions of Metal Gear Survive. Well, some of us thought Konami would let Metal Gear Survive go quietly, but the marketing team says otherwise. The bonuses include four gold plated weapons in the form of a bat, sledgehammer, machete, and spear. 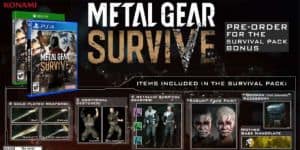 If you were sure that the trailer for this game included guns, you are quite right but the most effective weapons were a spear and explosive arrow head. Perhaps bullets are hard to come by in Survive’s version of the apocalypse. Such a situation would be a realistic pickle to be in so we’ll let it pass.

You’ll also be able to keep it fashionable while you’re making your way through the red lyrium infested zombies with scarves. That’s right, four metallic colored scarves in green, blue, pink, and silver. Speaking of fashion, you can also get “Kabuki” face paint. It is the usual basic version, if you will, of a white base with red lines that emphasize the expression of anger.

Other bonuses include two gestures, “Thumbs Up” and “Happy.” Though the latter could be confused with despair in the small photo we have of it. A mother base nameplate is also featured, along with the “Boxman [the Orange]” accessory. Essentials to any Metal Gear game, really.

Pre-order bonuses are nothing to judge a game by, but it is rather tempting when Konami includes scarves of all things. I’m not sure how essential the best colored scarf will be in a fight, as Konami certainly does not mention any skill or experience boosts to go with them.

Nor, for that matter, do they mention what is so great about gold plated weapons. Beyond extra shine, there is no hint as to what advantages these weapons might have over their “regular” versions.