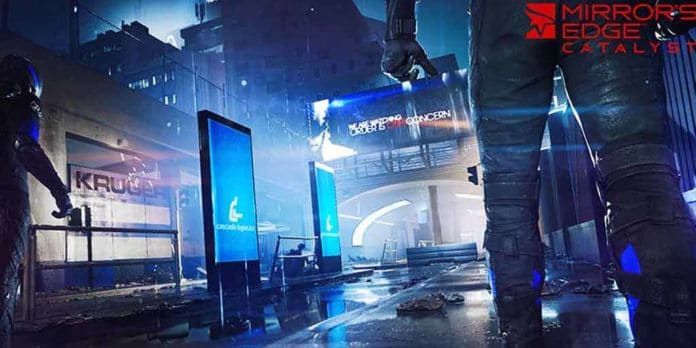 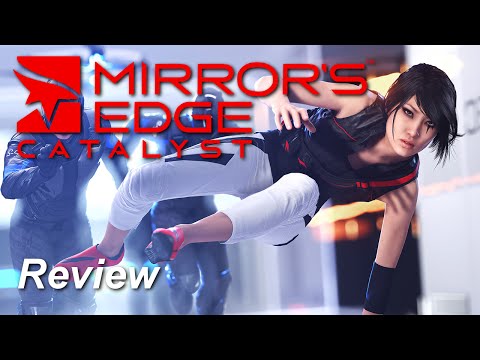 Mirror’s Edge: Catalyst is a game of intense highs and frustrating lows, where a single misplaced jump will send you plummeting to the street below. Acting as both a reimagining and a prequel to the original 2008 title, there is clearly a more focused shift towards flushing out the world and characters. It’s clear a lot has changed and most of this is to Mirror’s Edge‘s benefit, as it delivers some truly intense rushes. Sadly there are a few pitfalls on the way, as not every new decision developer DICE keeps pace. Though this didn’t stop my enjoyment of unearthing Faith’s past and exploring the beautifully designed world of Mirror’s Edge: Catalyst.

And to be clear, the world design is the real star of this game. While it pulls from the minimalist design of the original, the use of color and geometry gives every single section a true personality. It’s easy to discern which section of the city you are in from the colors alone, but it’s clear how much thought went into the placement of each building and walkway. This, of course, plays into the free running traversal, as Mirror’s Edge: Catalyst never has just one way to get somewhere. In almost every situation, there are multiple ways to tackle a certain area based on your own skill level and the equipment you’ve acquired so far. Freerunning through the City of Glass is simple and easy, requiring only a single button press to perform most of the actions. However, this can cause a few problems as the game will not always recognize exactly what movement you want to perform 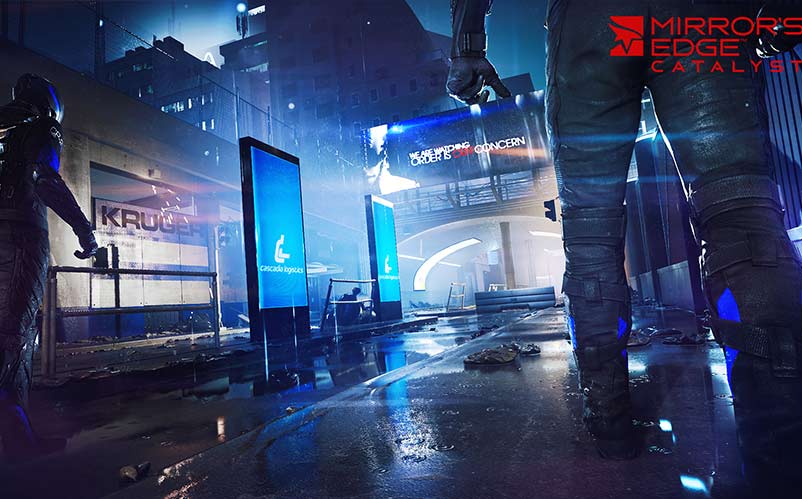 Freerunning through the City of Glass is simple and easy, requiring only a single button press to perform most of the actions. However, this can cause a few problems, as the game will not always recognize exactly what movement you want to perform. This can mean life or death for someone trying to avoid a hail of bullets or beat the timer for some of the various challenge runs. However, it wasn’t enough to deter me from trying to perform new and exciting tricks, as you always receive a steady progression of new moves and gadgets to test. This helps the game continue to feel fresh, as there is always a new move for you to learn and master.

Sadly, this didn’t translate into the combat as effectively, which fails to deliver on a variety of fronts. Faith can perform quick and strong attacks, most of which can be done as she exits from various free running abilities. While this does work when you need to run by guards to make an escape, Mirror’s Edge has a bad habit of forcing you into full on brawl’s with the police. This both drastically slows the pace of the game down and highlights how ineffective the actual combat system is. There is no real nuance to it, with most fights consisting of the player just strafing in a circle kicking wildly. Even when Mirror’s Edge: Catalyst introduces new enemy types, it almost never changes this formula up, making most fights into a rather bland experience.

Speaking of bland experiences, it’s a shame that the majority of side activities are so uninspired. Sure, the map is littered with stuff to do, but none of the stuff is particularly meaningful. You’ll either be delivering items before a timer expires, liberating radio towers, or trying to get the best time on a free running course. There’s also a wealth of collectibles to unlock, but most of it doesn’t add anything to the overall experience. All of this is fun the first few times you do it, but it begins to grow incredibly stale as you progress through the game. Though the small handful of actual side missions do make up for this, they are just too few and far between to make a big impact on the world. Unless you are diligent in perfecting your scores, Mirror’s Edge: Catalyst just doesn’t offer a ton of interesting things to do after the main story. 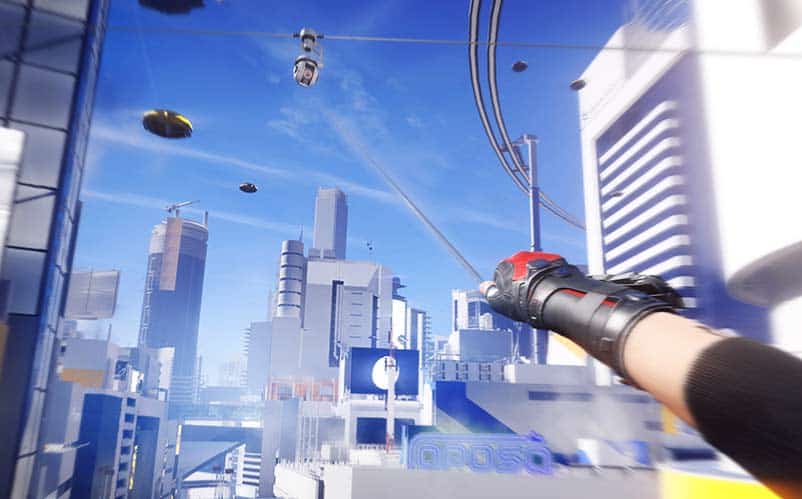 Thankfully the main story missions are incredibly fun and varied enough to not make you feel like you’re doing the same task again and again. One mission saw Faith scaling a building under construction, only to bring the entire thing down by disabling some lifts at the very top. Another had me break into an office building from the roof and climb down via hanging art pieces in the lobby. It’s all fun to play and only when you are forced into the aforementioned combat areas does it grow tiresome. One of the best inclusions is that of Runner’s Vision, which helps highlight in red which direction you should be going. Since many of Mirror’s Edge‘s levels are so open, having a helpful guide point you in the right direction is a welcomed addition.

Another welcomed addition is the cast of characters and story itself. Though at times it falls into a rather predictable plot, I genuinely found myself invested into Faith’s story and those around her. Each character has a vibrant personality that threatens to turn them into a satire of various tropes we’ve seen in science fiction stories before. Yet, they almost never cross into this area, with many of them feeling as if they are truly apart of this bleak city. Characters such as the egotistical Icarus and computer wiz Plastic offer some of the most interesting moments in Mirror’s Edge: Catalyst, while others such as Birdman just don’t get enough time to be truly memorable. Though Faith truly shines above all else, as her backstory is genuinely heartbreaking at times and only lends in flushing out her personality more. She isn’t the blank slate like in the original, but a fully realized character that you are tagging along with for this journey.

There are also some online features such a leaderboards and creating your own freerunning course, but that’s about it. Dice did seem to take some inspiration from the Dark Souls series, as you can leave markers around the world to help point people in the rirght direction. Though these are not nearly as refined and only are useful for collectible hunting.

Overall, Mirror’s Edge: Catalyst is a fairly solid addition into what will surely be a large franchise for EA. With a beautiful world, interesting characters, and some truly memorable missions, Mirror’s Edge easily surpasses the original. That being said, be prepared for an unrefined combat system and nothing remarkable to do once the credits role. During Mirror’s Edge Catalyst’s sprint to glory, it thankfully only stumbles a few times alone the way.