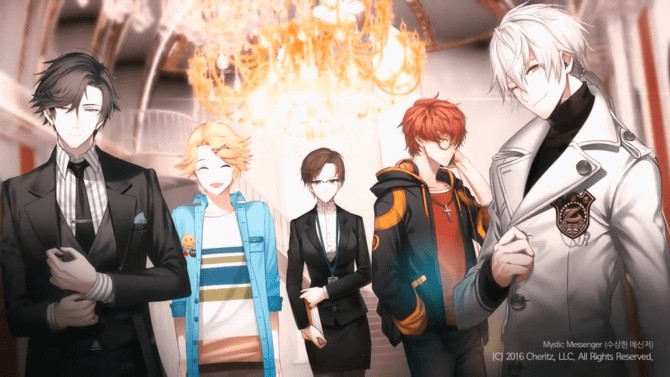 Picture this. You are at work, school, or wherever you spend your days, completing your daily routine. Suddenly, your phone vibrates to let you know you just received a message. Smiling at the phone, you realize that your boyfriend has messaged you. No, it’s not a real boyfriend, but a 2D anime boy from Rika’s Fundraising Association (R.F.A). This is the beauty of Mystic Messenger.

Gaining much popularity in the States after the English release to iOS and Android, this delightful visual novel game by Cheritz allows users to text and build relationships with members of a fundraising association after downloading a mysterious app. Not only do you get to try and convince guests to attend a fancy and elegant party, but you can also choose a boyfriend or female friend to get to know better and talk with. It may be a game, but Mystic Messenger has stolen the hearts of many and has brought a smile to thousands of faces. This list will cover some of the very best things about the app: 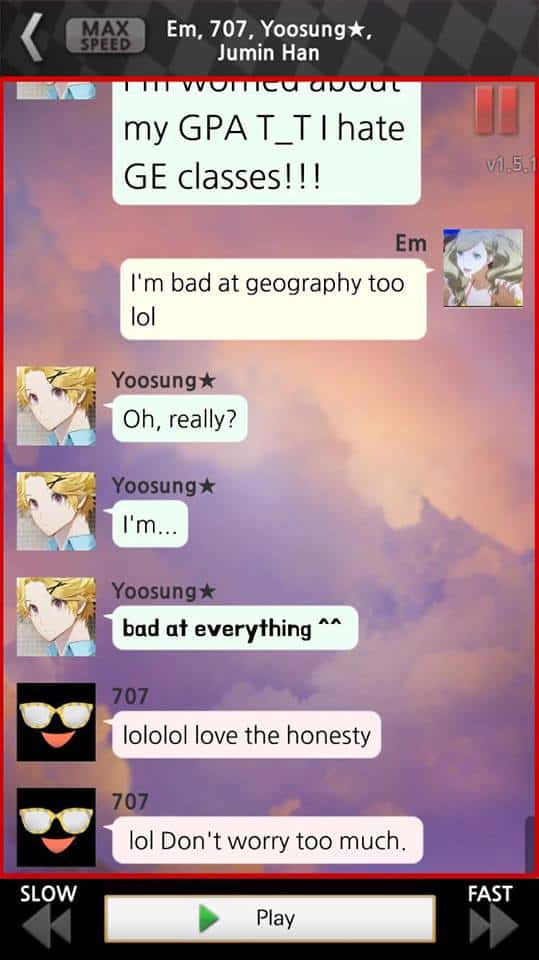 With an app name like Mystic Messenger, one would expect to…message. Many games in the otome genre allow players to pick certain choices that set them on a route in which they can attempt to date a certain character. Choices in these games are usually presented with art and in a visual novel form with portraits, music, and backgrounds. However, Mystic Messenger takes otome games to a next level and is set up like texting.

Chatrooms are available all throughout the day and characters will text and call you at random or after story events. It’s almost as if there are people replying in real time and the lingo is pretty accurate and funny. Sometimes you have two or more options that will raise the affection of certain characters, and it is done in a unique way.

For example, if you want to go for the actor Zen, you can feed his ego but avoid acting like a fangirl if you want to raise affection and end up on his route. Characters will also message you throughout the day, asking if you ate lunch or if you are going to bed. Everyone also has their own schedules, and although you can call them, they may/may not respond or be awake. It’s also worth noting that the game is set in real time for roughly 10-11 days.  These features are just one amazing part of the entire app. 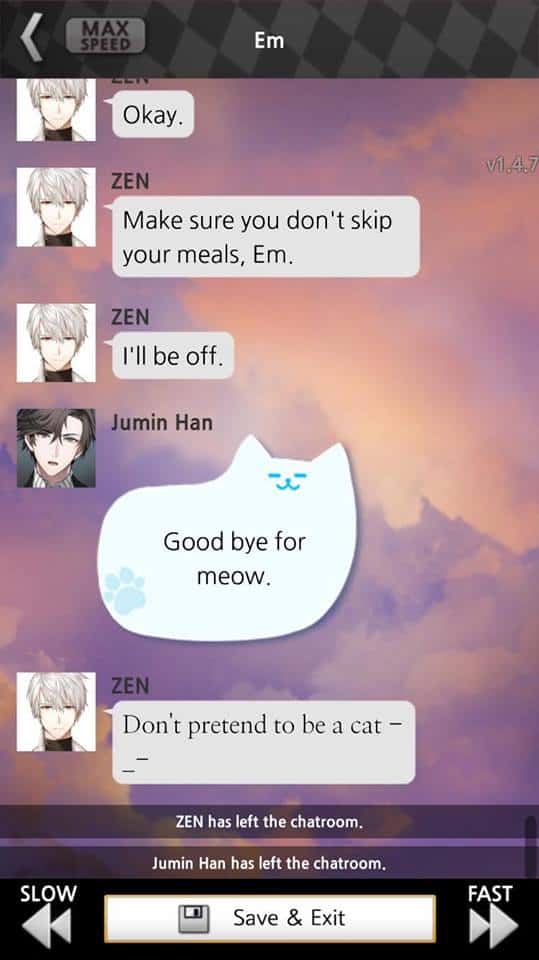 One thing that makes a dating sim even better is the character choices, and Mystic Messenger is definitely succeeding in that area. In the game, players can choose between 5 routes: Zen, Jaehee, or Yoosung in a casual story or Jumin Han or Seven in the deep story. Each of these characters is unique and go beyond the otome archetype. Zen is a flirt and actor with a romantic side, both in love with himself and his selfies.

Jaehee is the hard-working assistant to Jumin Han who wishes for a different career path. Yoosung is an addicted gamer dealing with the death of a loved one. Jumin is the chairman’s son to his company who loves cats and fine wine, but does not convey emotions easily. Finally, Seven is a memelord and hacker who longs to protect the R.F.A. and what it stands for.

Once players complete 5 calendar days, they will be set on the route of their man (or woman) of choice, which is where the major storylines begin. Each character must overcome a problem, finding confidence in themselves and through the MC. There is also a great deal of realism in the stories and how specific characters act. No one is perfect and each has their flaws, ultimately fitting into the overarching story. 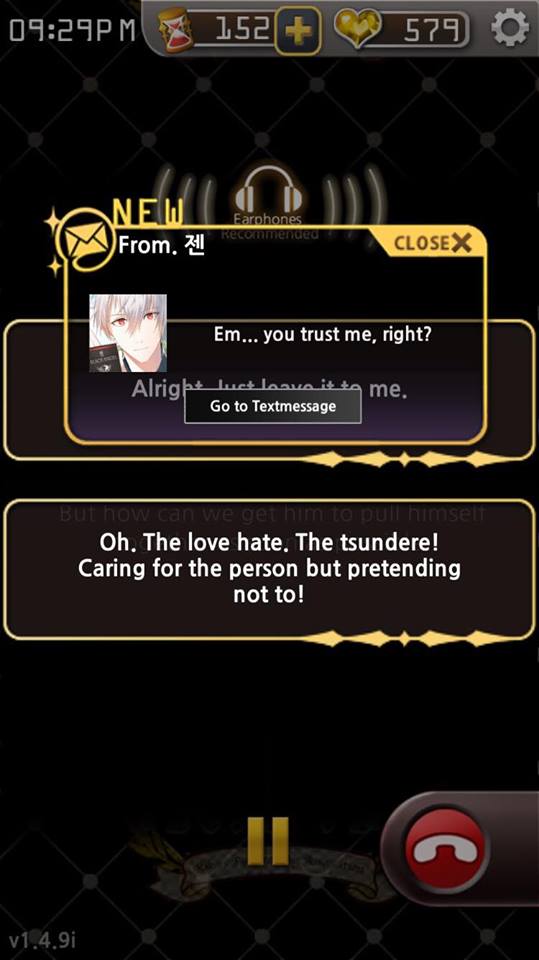 For a game about texting 2-D anime boys, Mystic Messenger has a pretty deep and thought-provoking storyline. At first glance, it may seem like a texting simulator, but it’s so much more than that. Beneath the fun chats, you’ll find a complicated story that deals with the origins of the RFA and serious undertones involving a cult and several secrets. The game becomes even more intense when you reach the end of the member’s routes.

Life or death situations are on the line, and the backstories of the characters begin to intertwine. There are also multiple endings to experience, and they will surprise you. Be prepared for a story that will cause you to question humanity while giving you a cheerful, enjoyable experience.

There are also 24-esque elements sprinkled in where characters must race against the clock in order to save the MC…or themselves. Some things about the game are very screwed up and are unexpected in a good way.

Chivalry is Not Dead: Ideal boyfriends/Actions And (Mostly) Healthy Relationships 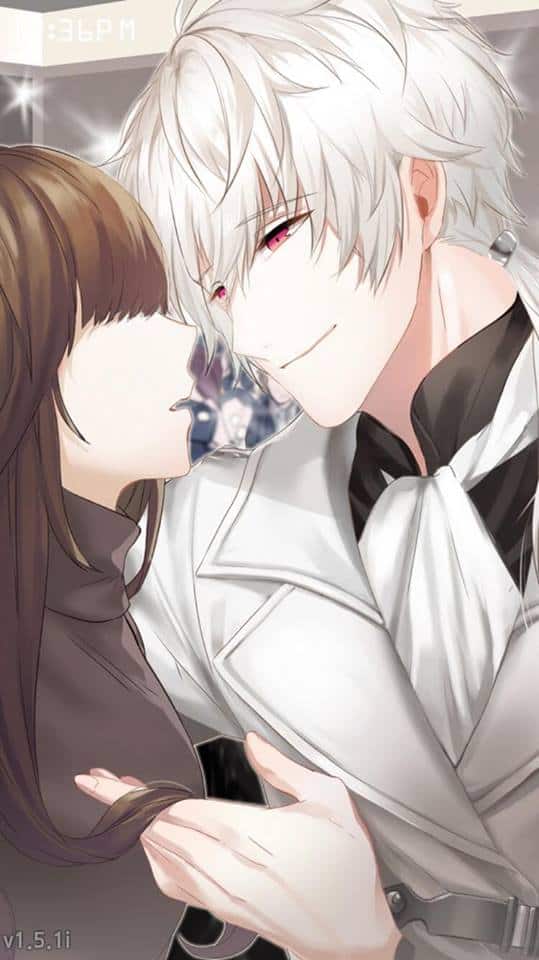 One of the major aspects about Mystic Messenger is the dating simulation elements which allow the player to converse with one of five characters with the ultimate goal of obtaining their love or friendship. A positive part of the game is how the relationships are portrayed. Otome games sometimes do not have the healthiest of relationships, but Mystic Messenger encourages romances that are positive. For example, in Yoosung’s route, the player must help him get over the death of a loved one but make sure he does not mistake you for her. In turn, he is able to overcome his problem with the help of the protagonist.

Why are these relationships healthy? Because both the protagonist and the love interest develop their characters and overcome problems in a constructive way. Sure, some of the boyfriends may be a bit more possessive than others, but the goal is to have a happy relationship in which both parties are treated with equal respect which is admirable. With the exception of a bad ending or two, most of the endings involve the love interest going out of their way to treat the protagonist right. Although there are a few “damsel in distress” moments, the nice and comforting dialogue makes up for it. The guys in MM are definitely ideal boyfriends that any girl (or guy) deserves. 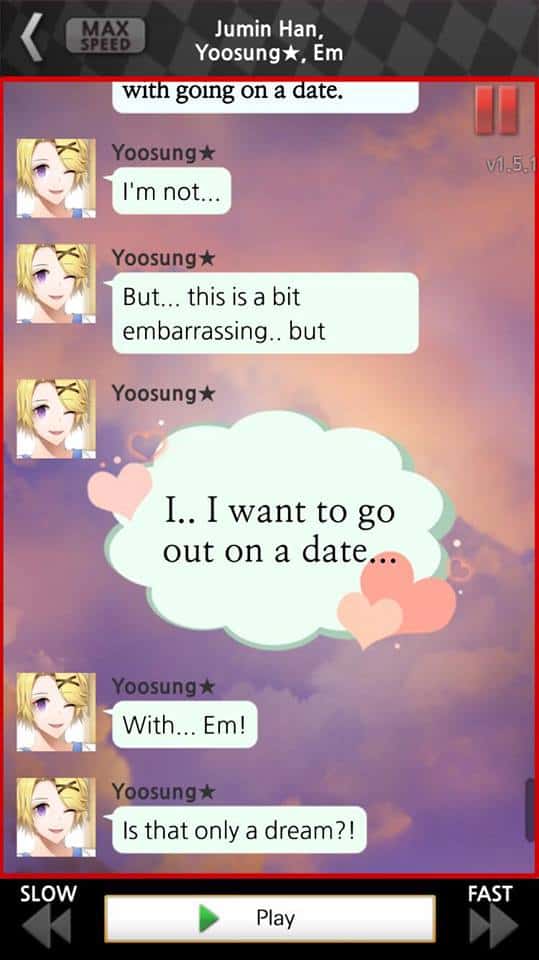 As stated before, Mystic Messenger presents positive relationships. However, there are also positive messages through the story. One theme is to not give up and that depression/hard times can be overcome. The members of the RFA are connected to each other even through the rough times. Some of the characters are dealing with grief or other issues such as self-discovery and career choices. Problems are realistic, even with actors and rich businessmen. The good endings of the story give players a positive outlook and are totally worth the 20 hourglasses to unlock the epilogues.

Accessible to Many (With Options to Enhance the Experience) 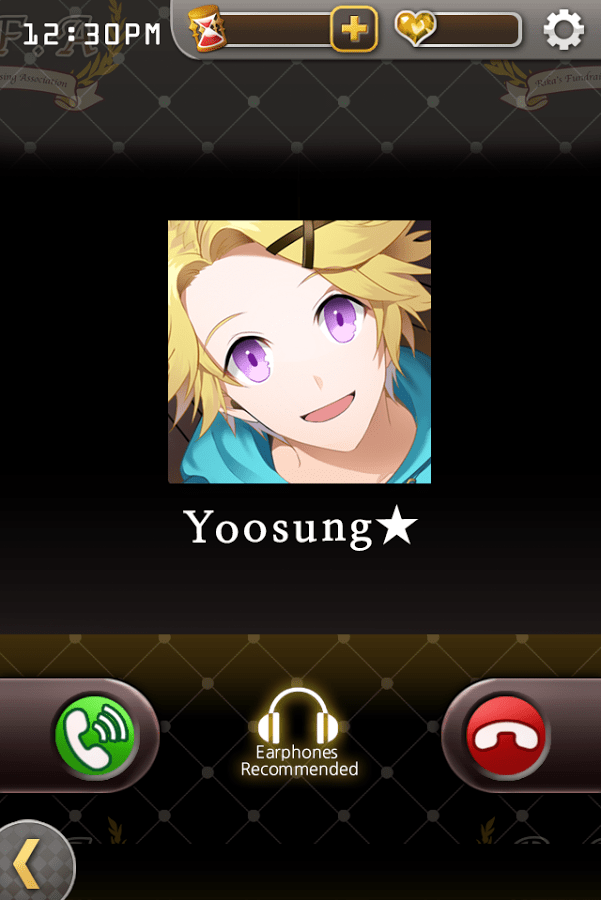 Because Mystic Messenger is not limited to a console, many can access the game by downloading the app on their phones, making it widely available. It also is a free game that can be played without spending any real money. However, with conversations nearly every hour, phone calls, and saves that cost hourglasses if missed, it is hard to keep up. There are options to buy more hourglasses as well as fast forward buttons for conversations. This gives the player the option to enhance their experience if needed. Cheritz, the developers, have been really generous with giving out free hourglasses for updates, so there is that option as well.

Becoming a Party Planner And Learning the Art of Negotiation 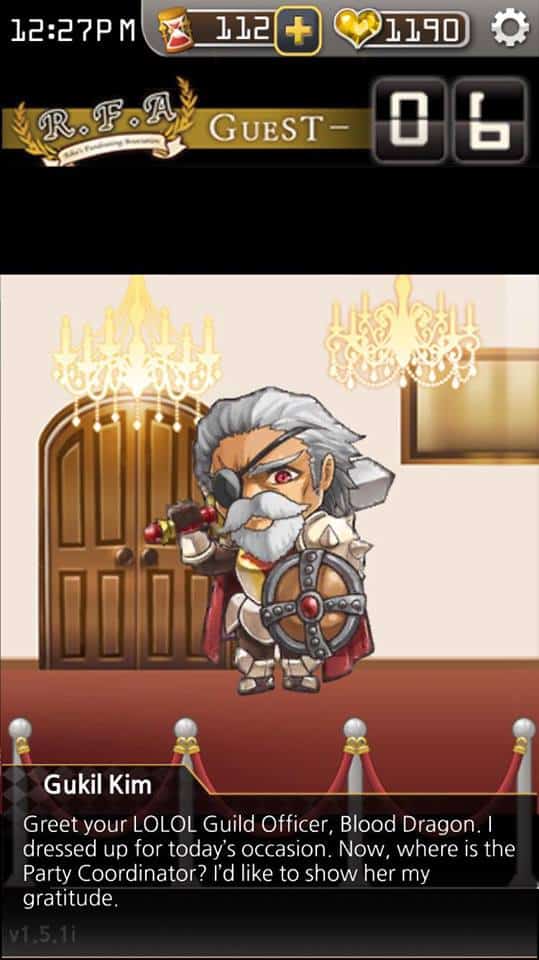 Besides dating pretty anime boys, there is another part of the gameplay that helps pass the time between conversations, party planning. As the new coordinator of the R.F.A., you must invite guests who hold various positions in society to attend a full-blown charity party. In order to obtain the good ending, you must successfully convince and invite at least 15 guests through an email system. From the cat mom club to internet memes, members will attempt to converse with you. Choosing between a few options, you have to prove that you speak their language and that they will gain something from attending the party. It is a fun gameplay element that gives the player another level of involvement. 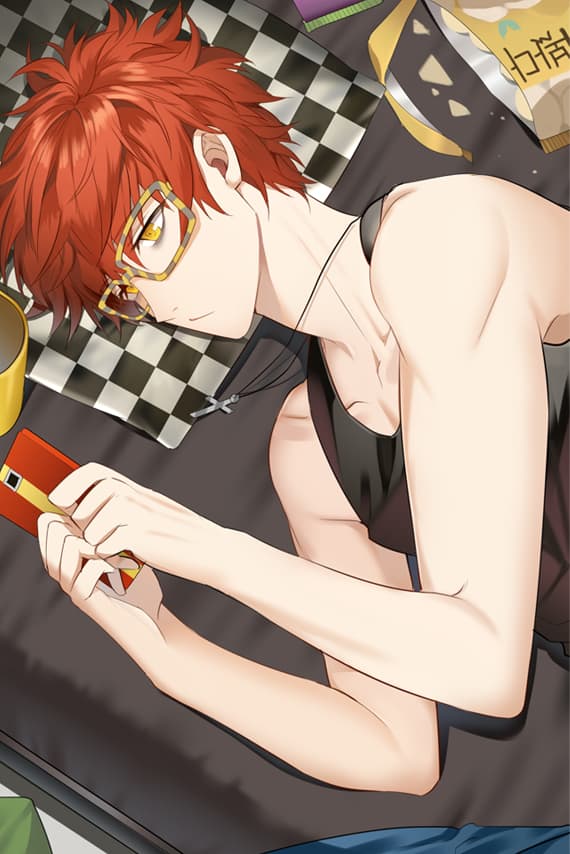 Otome games are known for multiple endings and Mystic Messenger has more than a few, which makes it very re-playable. Besides the division between the common route and deep route, each character has a few bad endings, a normal ending, and a true ending. In order to obtain these types of endings, players must approach the games in different ways each time. Since MM runs in real-time, it will take more than a month to unlock all of the endings. If you like one particular character over the other? Replaying the route is still as charming as the first time. Hopefully, we can have new characters or continuations in the future. This game never gets old. 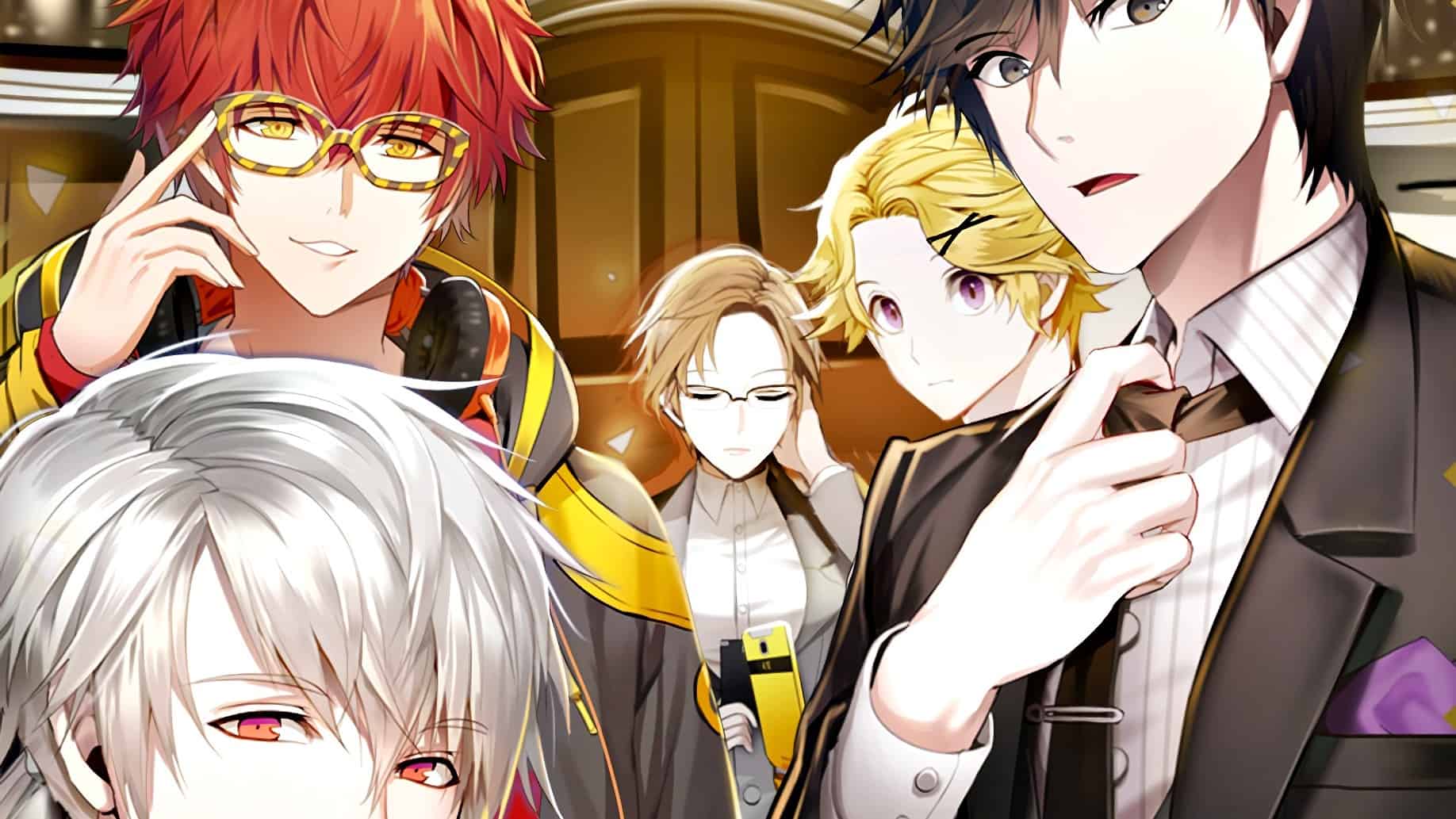 Ever since the game was released this year, the fandom has exploded both online and in the convention scene. There are several groups and communities that make hilarious and amazing memes as well as beautiful fanart and fanfics. At a con, I hosted a Mystic Messenger meetup and it was pure fun. As a whole, the fandom is most excited, positive, and respectful which makes it a joy to be part of. Cosplaying Mystic Messenger is also popular (and extremely fun!).

Brightens Up Your Day 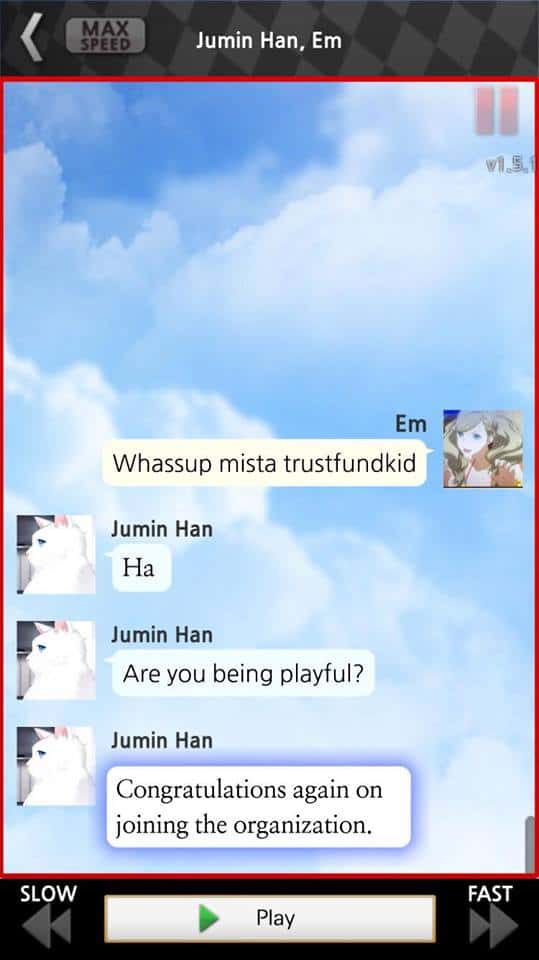 Finally, one of the best things about MM is that it really makes long days more bearable and brings a smile to your face. Sure, the characters may not be real, but reading a text about how beautiful you are really can brighten up your day. Although it is just a game, it really can cheer you up playing it throughout the entire day/week.

BONUS: Cheritz is a fantastic company who really values their fans!

Cheritz has been a very generous company that has put its fans first and is working on creating merchandise and more. They have been great at providing a fun experience for all fans — we can’t wait to see what’s next.