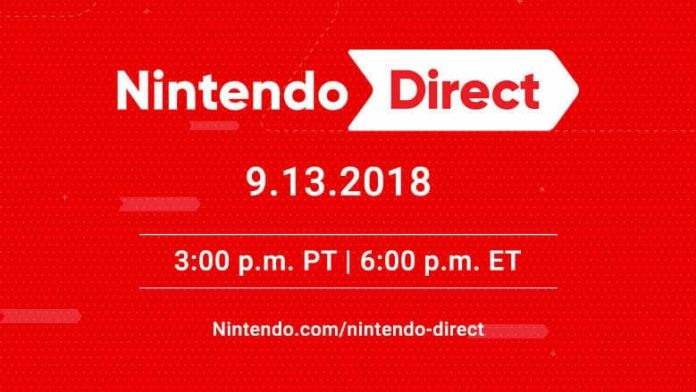 Originally set for September 6th, Nintendo decided to postpone their scheduled Nintendo Direct due to the significant earthquake that Japan experienced last week. A new date has been decided though, as Nintendo has announced their Nintendo Direct will air tomorrow.

As usual, Nintendo is being cryptic as to what is going to be covered in the upcoming Nintendo Direct. The only specifics we have is that the presentation will run 35 minutes and “will feature information about upcoming Nintendo 3DS and Nintendo Switch titles.” It’s still set for the same time, 6:00 p.m. Eastern, 3:00 p.m. Pacific.

While we speculated last week that Nintendo almost assuredly will touch on their Nintendo Switch Online service, that’s guaranteed now as. The publisher announced this morning that Nintendo Switch Online will launch on September 18th and that additional details on the service, including pricing and features, will be shared during the September 13th Nintendo Direct. Nintendo is offering a free one week trial of the service once it rolls out. You’ll have to have a Nintendo Account established in order to sign up.

What else will Nintendo be including in the event? Well, let your imagination run wild. Now seems like a great time to announce that a Nintendo 64 Classic is coming this Christmas. Many fans are hoping for a morsel of Metroid Prime 4 news. Others are begging for an Animal Crossing Switch reveal. There is an upcoming Animal Crossing: Pocket Camp crossover event with Splatoon 2 in Japan though, so don’t get hyped too quickly when either of those two franchises hit the screen.

What are you hoping gets revealed during the Direct tomorrow? Are you bracing for a let down or do you expect to be picking your socks up from across the room? We’ll have all the answers on what’s new with Nintendo tomorrow evening. Until then, speculate away.