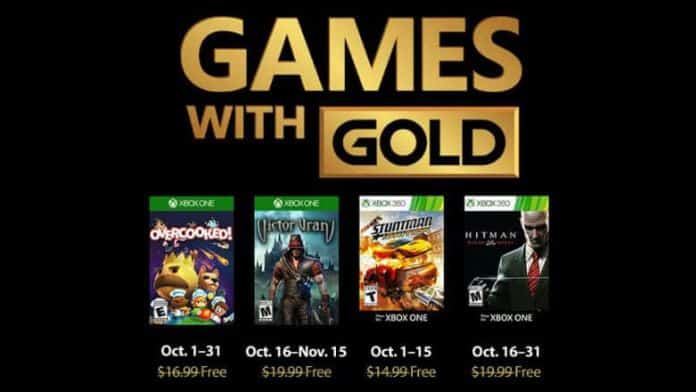 Xbox’s Major Nelson dropped a tweet giving Xbox Live Gold owners a sneak peek as to what’s headed our way within Microsoft’s October Games with Gold line up. Nothing next month is going to blow gamers away, but there are a few solid additional to your gaming library.

Well, since we already revealed the new games coming to Xbox Game Pass next month, maybe we should go ahead and reveal next month’s Games With Gold titles too. You saw it here first (and I’ll post it on my blog soon) pic.twitter.com/jkhHUBv1FO

One of the highlights of the October Games with Gold offerings is Ghost Town Games’ Overcooked!. The Xbox One title is best played in a cooperative setting with up to 4 players on screen at once. You’ve likely heard of the hectic kitchen simulator. It was nominated for numerous awards in 2016, including Best Multiplayer Game at The Game Awards. Overcooked 2! recently launched for PlayStation 4, Xbox One, Nintendo Switch and PC back in June.

Victor Vran is our other Xbox One title headed our way within the October Games with Game slate. An unassuming game, it actually reviewed fairly well with a Metacritic average sitting at 75. It’s an action RPG in which “the player assumes the role Victor Vran, a demon hunter who arrives in the fantasy city of Zagoravia, to help its inhabitants fight off a demon infestation of unknown origin.”

Stuntman Ignition ignites the Xbox 360 offerings for October. As the name implies, you play as a stuntman through a series of 6 fictitious films. Developed by Paradigm Entertainment, it’s actually a very dated game. It originally released for 360 in August of 2007. Reviews averaged a 75 on Metacritic at the time.

Finally, Hitman Blood Money rounds out the October Games with Gold titles. This too is quite the dated title as it arrived on 360 in 2006. It was a solid installment for Agent 47 though, with a critical average around 81%.

In addition to the October Games with Gold titles coming our way, Microsoft announced yesterday what we’ll be getting as far as Xbox Game Pass additions this month. There are some solid games here too, including the absolutely fantastic Forza Horizon 2 that we here at Nerd Much? just awarded it with a review score of 9.0.

That’s it for October. We’ll be back next month to let you know what’s coming our way thanks to Microsoft within their Games with Gold and Game Pass programs.