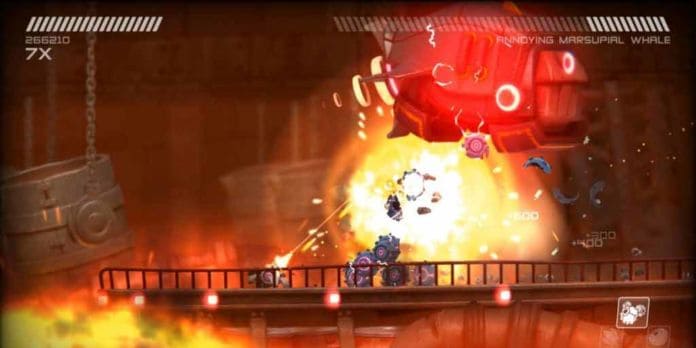 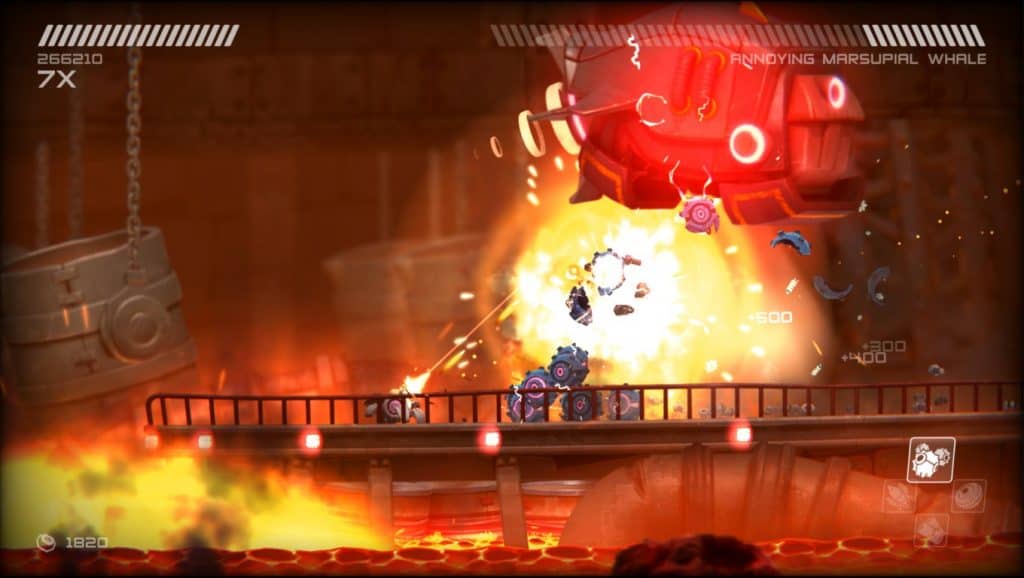 I had an opportunity to get my hands on RIVE, an action-packed, robot-hacking shooter/platformer hybrid recently released for PS4 and PC and the last game from indie developer Two Tributes. With its gorgeous 2D graphics, witty batter between Roughshot and the A.I. antagonist, and the old-school bullet hell style, there is a lot to love about RIVE. It’s definitely not for everyone, though.

When you first open the game, you will have access to exactly one mode: Hard Mode. Don’t be intimidated, though…oh wait, yes, do be intimidated because it’s absolutely insane. It seems unassuming enough at first, challenging yet not overwhelming, but the difficulty quickly multiplies exponentially until you’re ready to throw your controller in frustration. If you’re the type of gamer that willingly seeks out punishment, then this is undoubtedly the game for you. If you die enough times, however (and I am unashamed to admit that I did), you will unlock Soft Mode, which is marginally easier in that you take less damage and get more health drops. It will also display a little teddy bear with a heart in the corner just to taunt you.

The controls are set up in the style of a twin-stick shooter, with the left joystick for maneuvering and the right for shooting, which I quite enjoyed; however, it requires you to use the left trigger to jump, making it difficult to do so with precision when you’re moving with the left stick. The gameplay itself is simple yet fun; you’re in a tiny spaceship which can shoot in an arc around you, and enemies come at you from all directions. All in all, it has the feel of a classic arcade game, complete with an online scoreboard. There are a variety of stages which limit you in some way, be it disabling your gun, autoscrolling, or only allowing you to shoot in one direction, and those levels add some interest and help break the monotony a little. 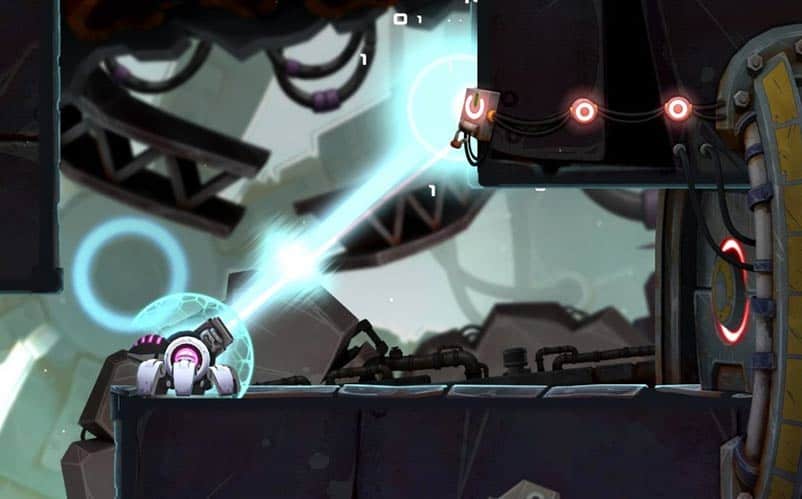 Then there’s the robot hacking, which sounds really cool but is actually rather disappointing in practice. You don’t do anything special to hack robots, you just shoot a special “hacking beam” at them. Granted, this is often while you’re falling through the air or surrounded by enemies, but the developers could have played up this aspect a bit more. It does add an interesting element to an otherwise simplistic game, but I wish there had been more to it and/or more hackable robots considering how much the developers hype that particular mechanic.

The charm of RIVE lies in its self-awareness; it often breaks the fourth wall and pokes fun at itself, although the charm begins to wear off after hearing the same quip from Roughshot for the hundredth time. It also blatantly references classic games such as Asteroids and Tetris, going so far as to borrow game mechanics from them, which will elicit a chuckle from old-school gamers. It even has you collect bolts to upgrade your ship in a similar fashion to Ratchet and Clank, although the mechanic is far less in-depth and satisfying here. The upgrades feel rather superfluous and are not nearly rewarding enough to justify the punishment that RIVE doles out.

Which brings me to my next point. I’m all for challenging games, but there is a fine line between challenging and frustrating. New obstacles come at you before you’ve had a chance to recover from the previous one, making it as much a process of trial-and-error as anything. You almost have to die to figure out what to do, and then execute that series of moves with exact precision. The slightest misstep will send you back to the last checkpoint; the only consolation is that it autosaves frequently so you never have to go back very far. As mentioned previously, this might be more forgivable if the rewards for progressing were better. There are only a small handful of upgrades available, none of which feel significant, the story is thin at best, and there is little variety in the enemies. All of these elements combined with the necessity of repeating every area multiple times contribute to the feeling of monotony. The campaign is about six hours, and by the end of it, I was ready for the torture to end; it was fun at first but then there was nothing new to see, and no real reason to progress other than for the sake of progressing.

Unfortunately, there were a few technical issues as well, including crashes and subsequent loss of progress. At one point my game crashed and I lost a significant amount of progress, at which point I decided to take a break; upon coming back, I discovered that the game had set me back even further. In a game that makes you fight so hard for any progress, this was incredibly frustrating and nearly made me quit the game. Also, there were times when the right joystick wouldn’t respond and I couldn’t fire my gun, so I would have to die and start over.

I hate to dismiss a game as “too difficult”, but RIVE is incredibly demanding without offering any incentive for enduring the frustration. I recognize that for some gamers, the satisfaction of beating such a game is incentive enough, and those people will undoubtedly find enjoyment in this game. Personally, a challenge is not enough to keep me interested, and RIVE fell flat in just about every other respect. While it was fun for a while and the dialogue was occasionally amusing, the lack of depth meant it got old quickly.