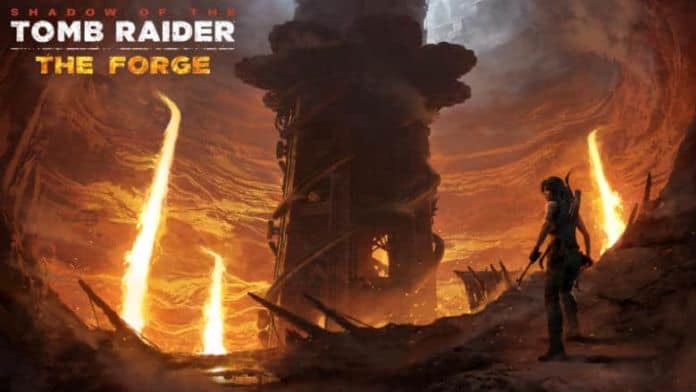 Quite the busy bee today, Square Enix has announced details regarding the publisher’s upcoming Shadow of the Tomb Raider DLC plans. The first of several DLC drops will be entitled The Forge and releases next month.

Square Enix confirmed that The Forge will be the first of seven “new DLC adventures” for Lara Croft. It’s a free download for those that have purchased the Shadow of the Tomb Raider Season Pass. The Season Pass costs $29.99, or you can purchase individual DLC packs for $4.99.

Within The Forge, the publisher states that “Lara must brave the lava-flooded Forge of the fallen gods to uncover the secrets of Kuwaq Yaku.” As players progress through The Forge, you’ll “uncover details about a friend’s ancient legacy, and overcome a danger long thought to be lost in flame.”

The Forge will bring a new challenge tomb to Shadow of the Tomb Raider that’s playable in both single player and co-op. Those that complete it will earn themselves the Grenadier skill, the Brocken outfit, and the Umbrage 3-80 weapon.

Square Enix emphasizes that The Forge is “a completely new adventure” for players to experience. They also confirm that future Shadow of the Tomb Raider DLC will provide “an abundance of fresh content, challenge tombs, co-op experiences, weapons and outfits, and additional narrative side missions.” They also confirmed that Score Attack and Time Attack modes will be introduced down the line as well.

The first Shadow of the Tomb Raider DLC, The Forge, releases for Xbox One, PlayStation 4 and PC on November 13th.