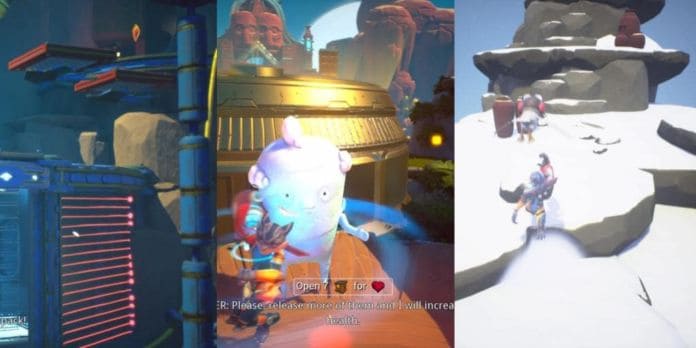 Skylar & Plux: Adventure on Clover Island is a platforming adventure game heavily influenced by Ratchet and Clank. You play as the silent Skylar with your sidekick, Plux, to do most of the talking for you.

You wake up as an anthropomorphized cat with come cybernetic upgrades that don’t make much sense. For example, your arm turns out to be some kind of AI that helps your escape CTR’s (the villain’s) space ship. Odd enough, as game tutorials go.

Once you’ve escaped, you land on an island and meet your sidekick. Plux is the voice of our silent protagonist, who has yet to speak a word of protest to the events of her life. Perhaps along with her memories, CTR also removed her voice.

Not long after everything is explained to you, you rescue the Elder. She is apparently “native” to the island, a cotton candy marshmallow creature, whereas Plux is a bird. The Elder serves as your Fire Keeper in the simplistic sense, upgrading your health as you find more of her trapped brethren. She also informs you of your quest and the areas you must visit before you are capable of defeating CTR.

If you have ever watched Invader Zim, you’ll know exactly what CTR is. There is a kind of trope out there of a villain who is generally terrible at being a villain. Their motives are as deeply flawed as their “diabolical” plans to take over the world. Their personality during random conversations is often far too revealing. The point of all this is to be funny, it is not meant to be treated as high literature or such. Skylar & Plux succeeds in this comedy, though I found the resulting transparency of the plot a little too flimsy.

That is not to say that the graphics were not up to par. The environment is large and chunky, much like Super Mario 64, or Banjo-Kazooie. It is a bright and colorful world filled with large bushes, trees, and clay-like rocks. Each of the islands have their own theme that is both pleasing and soothing to the eye. Skylar & Plux may not stand out quite like most Mario games, but the environmental design is up there with Ratchet and Clank; even if I cannot say the same for the character design. 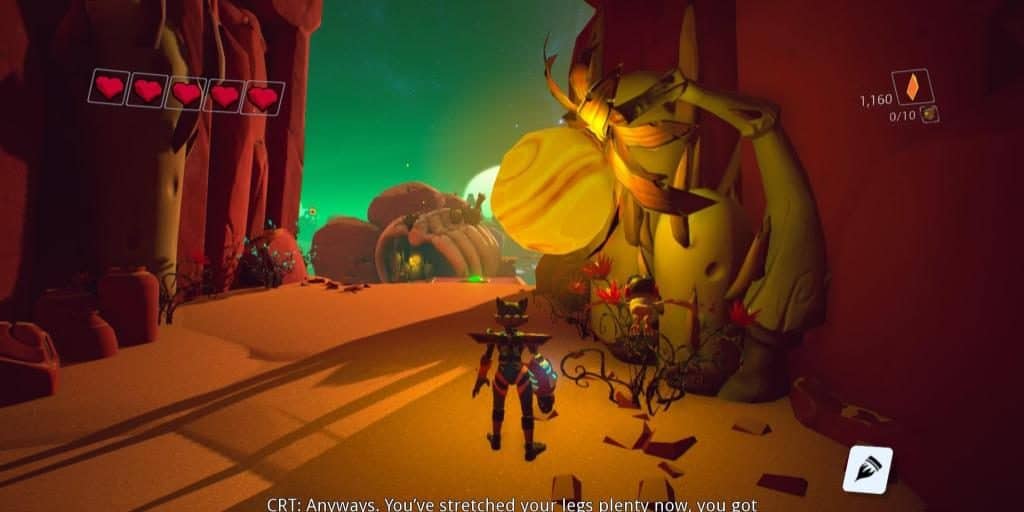 The character design feels somewhat out of place within the game’s environment. One is a cybernetic cat that would belong better in a Metroid game, and another a cotton candy puffball. The smooth and colorful environment fits Plux the best, he is a bird, birds live on islands, he is wearing an aviator helmet which fits into his back story. Skylar’s appearance is explained too, but it doesn’t seem to belong next to Plux or the Elder. I’m not sure what to make of this, other than just a few odd choices in design.

Perhaps they would have fit in more if I had seen them in proper cut scenes. Instead, we are treated to lackluster comic strips and some of the best voice acting I’ve heard in awhile. A very disappointing contrast, as there are no visual effects to match everything I know the actors must be doing. An opportunity lost, but understood if the budget is limited.

Though you could term the acting a little over the top, it fits the comedic genre like a glove. It is far more animated than the actual animation of the characters; like if the voices of Ratchet and Clank were transferred to the blank stares of a gulping fish. Wonderful to listen to, but discombobulating to associate with a character that is barely moving.

These do not hold a candle to the gameplay, however, which is far more fun than it is flawed. The level design is creative and entertaining to go through. The collision is very forgiving, as I often would miss a ledge or jump, but be saved by the very edge of the platform. Some might call this too easy or cheating, but I loved it. It was nice to feel good at platforming for a little while as the memory of Super Mario 64‘s magic carpet level still burns in my mind. 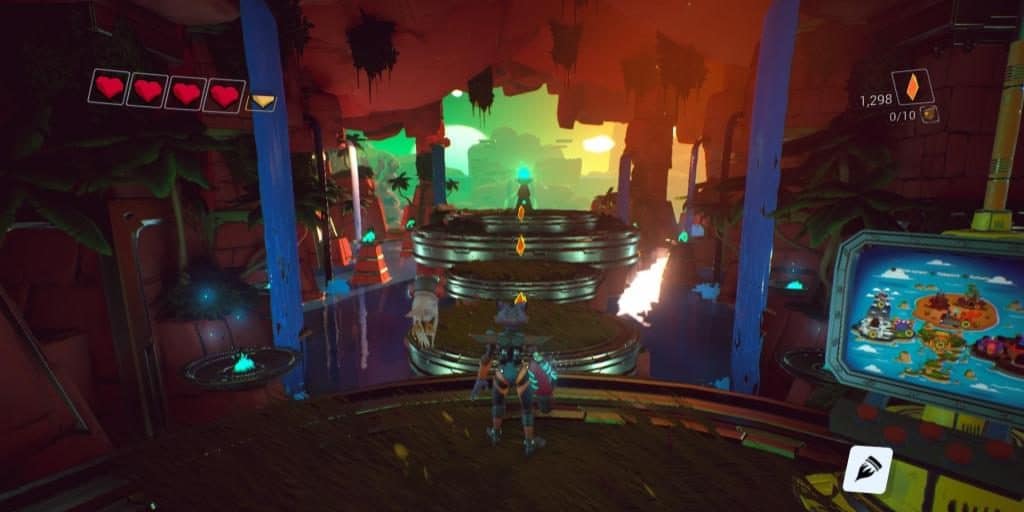 That said, the game has one major flaw: one hit from an enemy takes away one entire heart. You start off with three of them. If that isn’t enough to cause frustration, you must directly face an enemy to hit them. Because of this, you are hit first regardless of your intentions. When the enemy count is over five, this becomes more than a major issue. Thus I have decided that when confronted by too many enemies, ie you keep dying and you’re done with going through that same area ten more times, it is best to simply run from them. This doesn’t happen very often and you eventually gain a mechanic that makes running away or fighting much easier. Once I figured that out, I continued to enjoy the game as much as I did before.

The game, though somewhat short, has very entertaining and fun levels. They might be a little too easy for very practiced gamers, but I found Skylar & Plux quite enjoyable. Heck, the game might even be more for kids (or I’m suddenly amazing at platformers) and would do well on a portable system so that one may while away a few minutes or hours with the game.

Skylar & Plux succeeds in what it had set out to achieve: an homage to the classic N64 platformers like Mario, Ratchet and Clank, and Banjo-Kazooie. There are as many flaws in this game as those classics. As long as you are having fun playing Skylar & Plux, as I did, the folks at Right Nice Games have succeeded.