The Legend of Kusakari Review 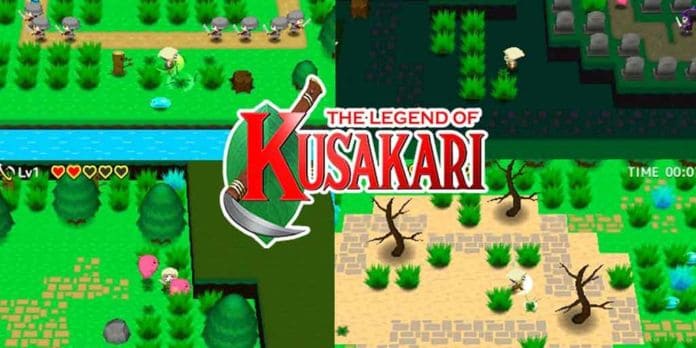 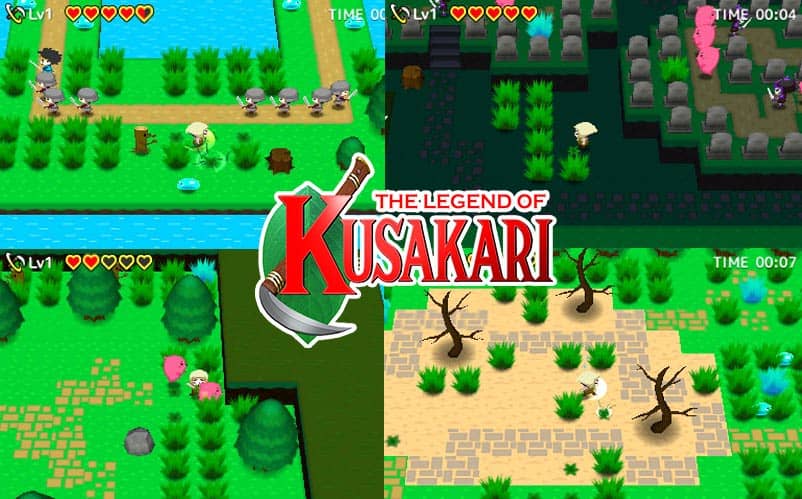 In so many games, we take control of valiant heroes. Waging war on the battlefield, we defeat monsters, gain EXP, and save the day. However, in order for heroes to fight, they need a clean battlefield with plenty of room. Sometimes the grass is too long, and heroes do not have time for minimal chores. It’s time for you to mow the lawn so the heroes can fight. This is The Legend of Kusakari, the ultimate grass cutter. Cue the trumpets!

Inspired by classic Legend of Zelda’s grass-cutting, the developers of Kusakari made an entire game focused on this feature. Players take control of the main character, Shiba Kari, who is tasked with cleaning the fields so the heroes can eventually flight the Demon King. Swinging your scythe back and forth, you must cut all of the grass and avoid the ongoing battles before your health depletes to 0.

The Legend of Kusakari dives players into a quirky world that is hilarious and addicting. However, is this eShop game for you? Let’s take each feature of this unique game and break it down step by step. 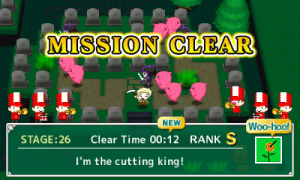 Mowing lawns has never been so simple. Using a very easy control scheme, players move using the stick, press A for a special spin cut, B for a regular cut, and L/R to dash. Levels are set up with a map that shows you the entire area. To complete a level, players must cut all of the grass before the time runs out. However, it’s not a cakewalk. Players must avoid the heroes fighting the various monsters, moving back and forth in the battle. Often times they are blocking the last patch of grass you need to pass, and you must strategize how to approach the obstacle. If you run into them, you take a beating on your HP which dwindles fast. As the menu screens say, timing is everything!

The puzzles in the levels, combined with the time-based gameplay and health keep things both intense and fun. As you progress, your scythe levels up and you face more obstacles (and much more grass), which is a challenge but not impossible. A nice feature is the blue grass that replenishes your HP when you are getting low, which makes the game a lot less frustrating.

The Legend of Kusakari consists of 50 levels, as well as an additional 10 levels after you complete the story. Levels are divided into chapters of 10. Chapter 1 is a great tutorial and gets players used to the game before moving onto more challenging puzzles and stages. It’s balanced pretty well.

One neat feature that Kusakari has is an Endless Mode with online leaderboards. In this mode, players can cut to their hearts content. Once you are finished, you can see how you match up to other players and compete to get the highest score. Not only does this add a competitive element to the game, it keeps players coming back to best their personal scores.

Although the gameplay is fun, it has its imperfections. Occasionally, levels can be tedious and it feels like you cannot go fast enough to beat the level in time. The control stick can also be a bit awkward to navigate, especially in tougher levels. Finally, health depletes too quickly at times. However, none of these gripes are too detrimental to the overall gameplay experience.

Although The Legend of Kusakari is primarily focused on cutting grass, there is a story behind it. The main character, a professional grass cutter, struggles to clear the battlefields for the heroes who fight. It is an interesting and unique spin to the typical RPG setting. Instead of the typical monster fighting hero, you are the person making sure the heroes can continue their battles. Rather than attacking monsters, you are slicing blades of grass. It’s comical, fun, and cute.

The premise is so interesting, yet the story only appears once in a while and isn’t that long. That’s okay for this type of game, but I wish there was even more information about the main character and setting.

Another notable part of the story is that it feels like a parody, which is a nice break from serious, story heavy games. 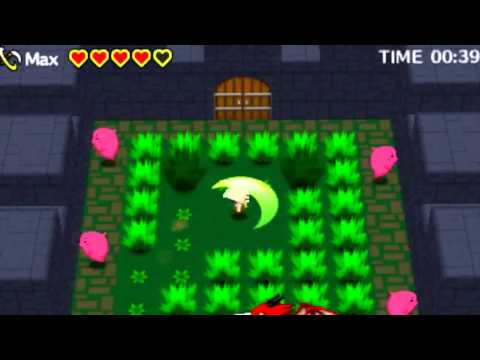 One thing the internet has been talking about the last few days are the trumpets from the Kusakari trailer. Many have poked fun at the music and odd trumpet noises. However, I personally did not think the trumpets were that bad. They only really played in the beginning of each level, and the soundtrack during the levels was pretty decent. Overall the soundtrack and sound is just fine. It’s not horrible, but not spectacular either.

For the $4.99 price tag, The Legend of Kusakari is worth the buy in terms of overall content and fun gameplay. It’s very cute, charming, and a good 5 minute pick-me-up game. Although the style of the game is similar to The Legend of Zelda from the logo to the button scheme, it’s a unique title that has plenty of content for it’s price. If you like strategy and gameplay focused titles, The Legend of Kusakari is worth it. It also does not take too much space on your SD card (roughly 300-400 blocks), so get your shears ready for a fun, Zelda inspired experience.