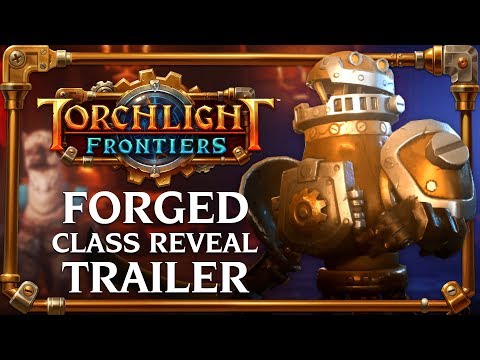 The developers describe the Torchlight Frontiers Forged class as an “awesome automaton” which “uses its arsenal of weaponry to build up heat before unleashing a devastating explosive attack on its enemies”. Today’s Torchlight Frontiers Forged class trailer gives us about a minute of footage of the new hero in action. The awesome automaton looks to have a good mix of close up and ranged attacks. He slices and dices those up close with his quick rotating attacks. And he can still launch plenty of projectiles to reach the foes that are beyond his blades reach.

In explaining Torchlight Frontiers, Perfect World Entertainment states the upcoming game “combines the heart of the beloved Torchlight series with a shared, persistent and dynamically generated world.” The developers confirmed that the new game will play similarly to the previous iteration of the series, saying  “players will team up with friends and devoted pets to hack and slash their way through a vibrant world, discover ancient ruins of lost civilizations and brave dungeons filled with riches and dangerous creatures.”

This likely isn’t the only new class that will be added to the series via Torchlight Frontiers. We’ll probably hear more on the new additions to the game from Perfect World and the team at Echtra Games further down the line. You can check out additional gameplay footage in the meantime that was released for Gamescom right here.

We don’t know exactly when Torchlight Frontiers will head our way. It’s expected to land on PC at some point in 2019. Xbox One and PlayStation 4 versions will then follow after that.