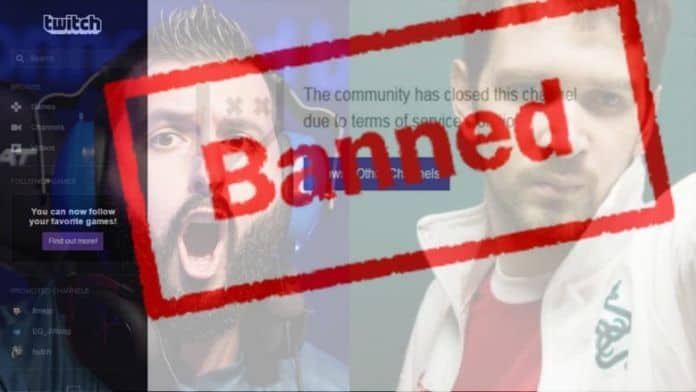 Destiny and MoE both received bans on Twitch due to their use of hateful language.

In a 30 minute, Why I Was Banned from Twitch.tv video Destiny breaks down the situation as a soft piano ballad plays in the background: 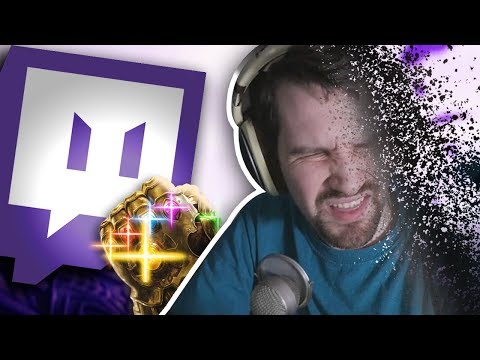 He was given two reasons for the 30-day ban:

“The first thing was because I called the one dude a bad word… I said the f-word and then called him a r*tard or whatever. Apparently that was bad. Then they also clipped a thing where, when I was talking to my mom, I [said] “Holy sh*t maybe they should f*cking shoot Cubans or whatever that were swimming over to the US or some sh*t like [what] my mom wants to do to Mexicans.”

He claims he’s unsure which comment was weighed more heavily in the decision. He’s particularly frustrated by the idea of being penalized for hate speech against Cubans because he is Cuban, completely disregarding his own comment on Mexican people as well as the fact that it’s possible to make ignorant comments about your own race. Regardless of opinions, it still falls under the umbrella of hate speech according to Twitch’s community guidelines.

A document Destiny is well familiar with but admits he has little practical understanding of, stating:

I talked to my partner and I’m trying to find out what’s allowed and what’s not allowed because that’s still something that I don’t f*cking know what the f*ck the answer to that sh*t is, like he was telling me things like… I probably shouldn’t be saying things like Autistic or D*wnie [as in someone with Down Syndrome] or R*tarded anymore”

He then pulls up, on stream, the Twitch Hateful Conduct and Harassment section. Reading it aloud:

Hateful conduct is any content or activity that promotes, encourages, or facilitates discrimination, denigration, objectification, harassment, or violence based on race, ethnicity, national origin, religion, sex, gender, gender identity, sexual orientation, age, disability, medical condition, physical characteristics, or veteran status, and is prohibited. Any hateful conduct is considered a zero-tolerance violation and all accounts associated with such conduct will be indefinitely suspended.

He does make the connection between his language and the way hate speech is categorized, admitting that his words often “fall under” hate speech and sort of reaches a moment of begrudging acceptance. But, like many people, Destiny still believes it’s possible to use slurs “in a non-hateful way” and wonders if/why that “will still get [him] in trouble on Twitch.”

MoE was met with a similar fate and directly shared the clip that got him banned with followers on Twitter. He has since deleted the Tweet but you can read it below. 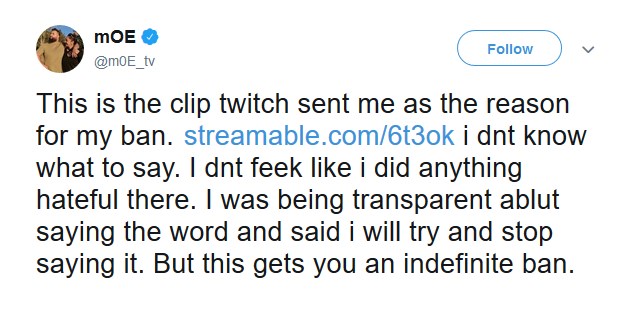 In the clip he states:

I’m gonna try to stop saying f*ggot but it’s one of my favorite words of all time. It’s not a bad word; it has a lot of meanings.

He then asks his fellow players  on stream to weigh in, the exchange is as follows:

MoE: really? I don’t know why. I’ve been using the word.. like.. you can’t just change me.

Player 2: I’ve explained it so many times like I use the word r*tard to call people like—

MoE: same! I use the word f*ggot to call people r*tards
Player 2: yeah like, I don’t call a special person a r*tard. I call a r*tarded person a r*tard when they’re acting r*tarded

The fact that MoE feels f*ggot and r*tard are interchangeable terms shows that this is language he defaults to in order to insult someone (jokingly or else wise). The problem with that is it completely ignores the definition of those words and the fact that they used to marginalize and belittle the LGBTQ+ Community and those with learning disabilities, respectively.

The common thread here is both these streamers think hateful words can be used without hate but it’s impossible to distill your own connotation for a word (seeing f*ggot as a replacement for bad) from the history and continuing oppressive nature for that word. The short of it is, if bigots are shouting it at people you might not want to align yourself with that language.

Perhaps the most poignant moment of this interaction came from Player 2 & 3’s final comments in MoE’s clip, in which they quote the character Michael Scott, from the hit TV Show The Office:

What amazes me about this moment is the fact that the parties involved completely missed the point of the episode and that moment. This snippet from The Office isn’t funny because it’s true. It’s funny because it’s the moment where Michael is defending his bigoted language with even more ignorance. As the audience we’re suppose to laugh at how dense and out of touch Michael is with the situation.

For that entire episode, ‘Gay Witch Hunt,’ the joke is how poorly Michael handles the workplace in relation to finding out Oscar is gay. Michael Scott, especially in those early seasons, is an insensitive buffoon that we laugh at for being such a horrible yet goofy person. He is not a guide for how to conduct ourselves, in fact, he’s quite the opposite.

Making the disconnect here all the more baffling. Here is hoping these streamers take some time to reflect on their words because if you mean someone is being an idiot, when you call them r*tarded you can just call them an idiot instead. If you say what you mean there won’t be any risk for “misinterpretation.” And if that’s hard for you because you’ve been speaking this way your whole life, I have two words for you: git gud.