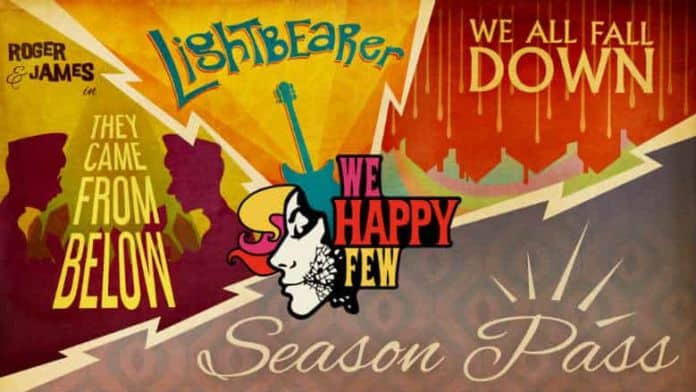 With Compulsion Games’ title finally officially launching in a matter of days, the studio has begun divulging what fans can expect in term of We Happy Few DLC.

We’ve been waiting on We Happy Few for quite a while now. It was announced as a Xbox Game Preview early access program participant during Gamescom 2015. The game was then a highlight during Xbox’s E3 2016 conference. It debuted to the world via Steam Early Access, GOG and The Humble Store in July that same year. It then hit Xbox shortly thereafter. Two years later, it’s ready to roll.

If you’re unfamiliar, the title is frequently compared to other dystopian games such as Bioshock, Fallout and Don’t Starve. While the early access version of the game only features the playable character of Arthur Hastings, the final game will sport 3 playable characters whose stories interweave throughout the core narrative. Each of the 3 have their own traits. Hastings is proficient with melee weapons, Sally is superior at stealth, and Ollie is the expert with explosives.

Forget about what’s in the base game launching Friday. We’re here to discuss We Happy Few DLC plans. The first part of the upcoming package will be a Sandbox mode. This will be free to everyone and will allow players to customize their Wellington Woods as they see fit. Here you can make the world “larger, smaller, more dangerous, less food, more Wellies, etc.”

You can also experience “Wellie Mode” within Sandbox mode. Compulsion says that “This mode will bring back the systemic, sandbox world showcased in the early days of We Happy Few.”

The other We Happy Few post launch DLC is locked behind a premium paywall. Or you’ll be automatically eligible to access the content if you splurge for the We Happy Few Deluxe Edition. There are 3 new stories that Compulsion is developing as DLC; Roger & James in: They Came From Below!, Lightbearer, and We All Fall Down. Here are descriptions for each:

Roger & James in: They Came From Below!

Precocious Roger and Impetuous James set off in search of adventure and love, only to uncover bizarre technology and a terrifying new threat. All is not as it seems. Or is it exactly as it seems?

Heartthrob, artist, and personal trainwreck, Nick Lightbearer is Wellington Wells’ most celebrated rock star—but what truly makes him tick? Tune in to Uncle Jack’s late show to find out.

We All Fall Down

Much like any well-worn happy mask, all societies develop cracks in their veneer. But that doesn’t mean you should go digging up dirt from the past. Right? *pops a Joy pill* Right!

You can’t prepurchase the 3 DLC packs currently. They are only available for the time being within the Deluxe Edition. But Compulsion promises that the We Happy Few DLC will be available to everyone with additional details following the game’s August 10th launch.