When it comes to big-budget Hollywood films the production of the movie can sometimes overshadow the actual project. Whether it’s through the death of a specific actor, a nasty accident, or turmoil behind the scenes these circumstances can sometimes be far more interesting than the production.

I say this mainly because how Geostorm was made is inherently more fascinating than any of the nonsense that manages to make its way onscreen. Geostorm was actually made in 2014, but the film tested so poorly that it had to undergo over $15 million dollars in reshoots in order to try and salvage this trainwreck of a film.

Now years later, director Dean Devlin has finally released his picture and it’s about as nonsensical, incoherent, and underwhelming as you’d expect. The story is set in the near future where natural disasters have become an all too frequent occurrence. In order to combat this, the United Nations developed a special space station and satellite grid (code named Dutch Boy) that’s capable of controlling the weather.

All goes according to plan until several freak accidents begin to happen that triggers catastrophic natural disasters on a global scale. With the world collapsing into chaos, the creator of Dutch Boy, Jake Lawson (Gerard Butler) must journey to the space station and figure out what’s causing all the trouble. However, Jake discovers that this was not just a series of accidents and that someone is manually causing all of these systems failures.

This is perhaps Geostorm’s biggest issue as the plot becomes too convoluted and focused on the wrong elements. There is little doubt that the main draw for this film is the prospect of watching nature destroy civilization, yet Geostorm barely focuses on this. Instead, Devlin decides to focus the main story around a government conspiracy that isn’t original in any way.  Sadly there is nothing special about another plot revolving around corrupt politicians and Geostorm doesn’t shake up this formula at all. Geostorm’s main story is way too cartoony in nature and at times the movie appears hellbent on refusing to accept this fact. 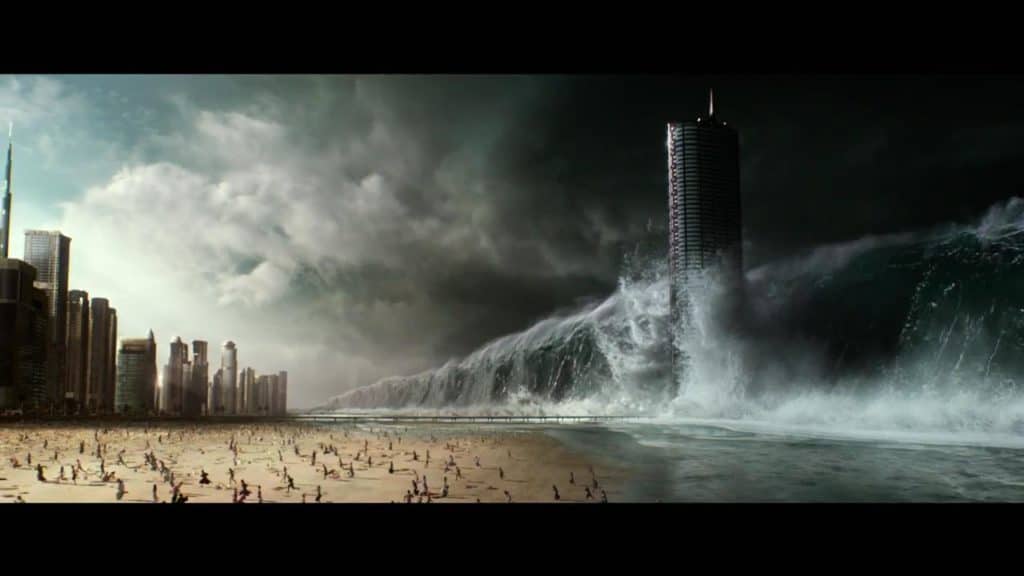 Where Geostorm does succeed is anything involving the space station, which always has far more momentum surrounding it. The danger on the space station feels far more real and the hunt for the traitor on staff is genuinely compelling. Yet, this section only makes up half of the film, so you’ll need to constantly slog through pointless drama back on Earth. This breaks up the pacing of the movie and never allows the sense of urgency this story desperately needs. Geostorm is also predictable and the big “twist” can be seen miles away.

You’ll notice that I haven’t talked a lot about the disaster scenes in Geostorm and that’s mainly because there aren’t many. Despite some creative ideas, Devlin never really commits outside of one cool scene in Hong Kong to showcasing a prolonged disaster moment. There are multiple sections where Geostorm produces some really inventive concepts, but the movie never commits to showcasing them. Instead, the film flashes brief clips of this awesome looking disaster and then drags audiences back into the boring conspiracy. The only disaster moment that’s memorable is set in Hong Kong and involves giant columns of fire.

What’s even more surprising about Geostorm is just how cheap everything looks. With the exception of the space station, all of the CGI looks like something out of a made for tv movie. Almost every explosion or visual effect appears completely out of place with the rest of the film. This is especially true for the ending where the big disaster events invoke more laughter than awe-inspiring terror. While I understand that Geostorm had a troubled production, there is no excuse for the special effects to look this awful. 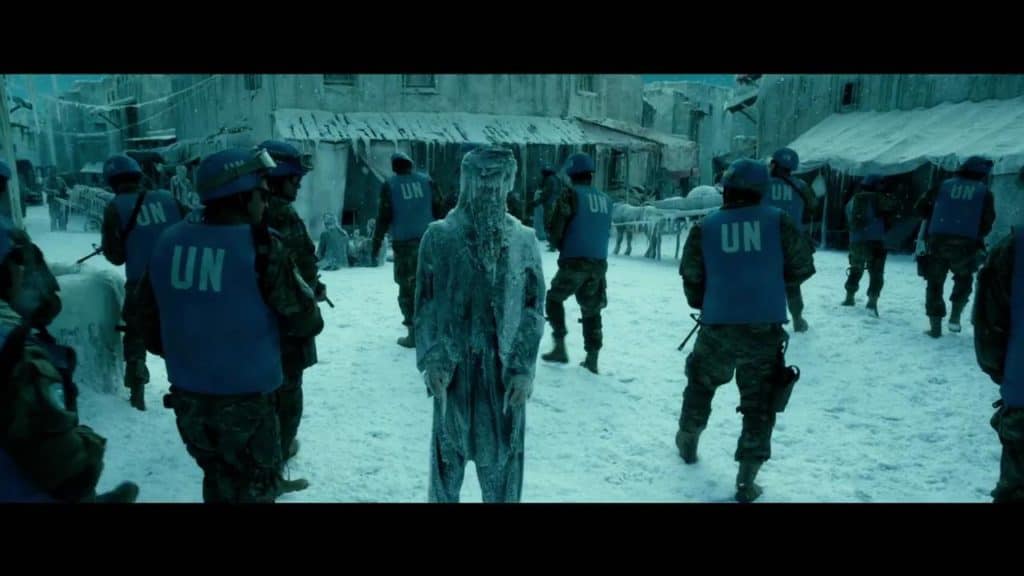 Performances, on the other hand, are all over the place in terms of quality. Our lead Gerard Butler does a decent enough job with the material he is given and it’s clear he is having fun with the material. Butler isn’t as commanding a lead as he usually is, but his gravitas is certainly felt throughout the movie. The same can be said of his space station crew, all of which are fun and offer up some of the movie’s best laughs. Even if the crew does conform to traditional archetypes, they fully embrace this idea and ham up every moment they have.

In contrast both Jim Sturgess (Max Lawson) and Sarah Wilson (Abbie Cornish) give wooden and boring performances. We are supposed to believe that Jim and Sarah are truly in love, yet the actors have some of the worst chemistry I’ve ever seen. They aren’t a convincing couple and it makes every scene they are in – of which there are many – a chore to watch. Rounding out the cast is Andy Garcia as the President of the United States and Ed Harris as the Secretary of State. Both of these actors are fine, but their characters never have anything truly interesting to do.

Geostorm is a boring, unfocused mess of a movie that lacks a sense of cohesion or identity. While the movie is clearly billed as a disaster flick, it focuses too much on dumb, dragged out conspiracies. With the exception of Butler and his crew, the cast offers nothing of substance to the story. Even the action scenes look cheap, which is a shame given some of them are quite inventive. Overall, Geostorm is a chaotic, disastrous mess that probably should have been left on the cutting room floor.