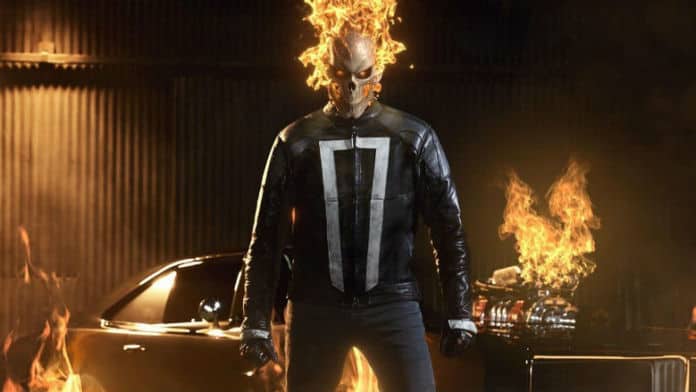 While Netflix and Marvel are severing ties in favor of the latter headed toward Disney+, it appears the Marvel and Hulu partnership is still fruitful. Both Ghost Rider and Helstrom shows have been announced to be in development for Hulu’s streaming platform, with Diego Luna confirmed to reprise his role as Robbie Reyes, aka Ghost Rider.

Luna first appears in the role of Reyes within Agents of Shield’s fourth season. So with Reyes returning to the role, it’s fairly obvious that Hulu’s Ghost Rider series will exist within the same corner of the MCU TV universe as Agents of Shield. Though Variety notes “sources stress that this will be a completely new iteration of the character in no way connected to the Agents of S.H.I.E.L.D. storyline.”

The series will be helmed by showrunner Ingrid Escajede. Escajede will also executive produce alongside Paul Zbyszewski and the head of Marvel TV, Jeph Loeb.

Zbyszewski will be the showrunner on the other Marvel show headed to Hulu in Helstrom. Not much is known about the project, but reports are that it will revolve around the brother and sister duo of Daimon and Ana Helstrom. It’s said that “the siblings have a complicated dynamic as they track down the terrorizing worst of humanity, each with their attitude and skills.”

Daimon Helstrom first appeared first appeared in Ghost Rider #1, so it’s likely that the Hulu’s Ghost Rider and Helstrom shows will be connected in some way. He and his sister, named Satana in the comics, are half-demons. Trained by their father in dark magic, Daimon eventually rebelled against his evil father’s influence and acclimated to humanity. While his sister embraced her abilities as a sorceress. Thus setting up the “complicated dynamic” suggested.

Other than the Ghost Rider and Helstrom shows, Hulu already has quite a few Marvel shows in the works. It was revealed back in February that four adult animated series were in development. Shows include M.O.D.O.K., Hit-Monkey, Tigra & Dazzler, and Howard the Duck. With the four projects ultimately culminating in a The Offenders special.

Previous articleSony Marvel TV Universe to Be Run by Chris Lord and Phil Miller
Next articleMay PlayStation Plus Games are Few but Solid
Jeff Scott
Growing up a 90's kid, Jeff found his love for gaming during Nintendo's heyday. Because of that, you could (perhaps sadly) call him a "Nintendo Fanboy" to this day.