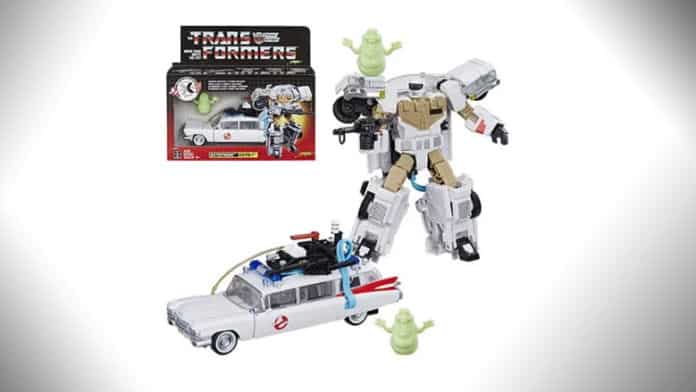 The Ecto-1 has undergone some modifications thanks to Optimus Prime to transform into EctoTron. If only Venkman, Stanz, Spengler, and Zeddemore had this when Stay Puft stomped through town. Maybe he could have diminished the collateral damage and kept the oversized marshmallow at bay.

Right out of the box, the figure looks like a screen-accurate depiction of the classic Ecto-1, complete with all of the gadgets affixed to the roof. When it’s time to roll out, EctoTron reveals himself in a 7.25”-tall action figure. The robotic Paranormal Investigator and Eliminator comes with a Neutrona Wand particle thrower more fitting for his size, a pair of Ecto Goggles, and a name patch sporting his name.

Included with EctoTron and his accessories is a Slimer figure, who’s really just here to cause mischief. The little Onionhead is no match for EctoTron’s size and firepower but is a fun companion to sit on his shoulders.

When there’s something weird on Cybertron, you know you can call the Ghostbusters to send EctoTron to trap whatever pesky Decepticon apparition is terrorizing the Autobots. When he’s not defending his homeworld from pesky poltergeists, EctoTron is carting the Ghostbusters around town for their own ghostly encounters.

It’s an unexpected alliance that, to the delight of Venkman, has made the Ghostbusters a lot of money. So much so that they started franchising and hired that Rookie.

Send EctoTron on the bigger busts, but don’t forget to wash the slime off of him after. It really gets into his gears and slows him down when it builds up.

Previous articleRey ArtFX Statue: The Rise of Skywalker
Next articleLuigi’s Mansion 3 Statue is Going Right On Our Xmas List