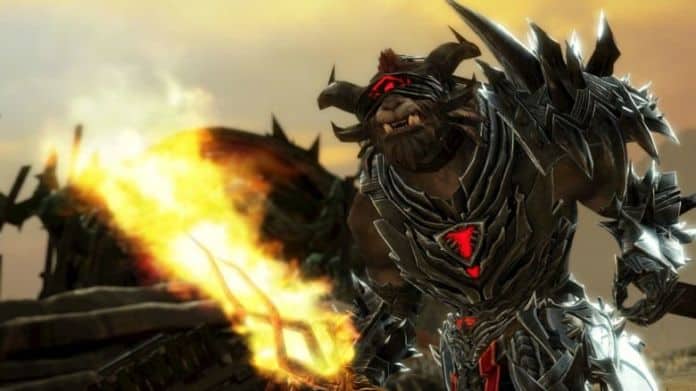 Today, two employees were fired from ArenaNet: the studio responsible for Guild Wars 2. Some snippy comments on Twitter snowballed into Jessica Price and Peter Fries being unemployed. How could it possible get there?

It all started on July 3rd. Guild Wars 2 writer, Price, published a Twitter thread on the challenges of creating dynamic characters for an MMO player character and offered insight into how AreaNet’s narrative team approaches things.

Since I spent all kinds of time saying it on a Reddit AMA, and I haven't talked about actual game dev on Twitter in a while, here's a thread about writing for the PC character in an MMO.

Fan and YouTuber Deroir responded, complimenting the thread but ultimately disagreeing with her.

Price, tired of being told how to do her job as if she didn’t understand the concept of branching dialogue, reacted “Today in being a female game dev: ‘Allow me—a person who does not work with you—explain to you how you do your job.”

To some of us this may seem like an overreaction but what we fail to see is the behind the scenes of it all. This isn’t about figuring out if Deroir’s comment was okay, valid, etc. Instead, let’s consider the larger context at play

Price told Kotaku in an email,

By the time that guy came along, I was so tired of having random people explain my job to me in company spaces where I had to just smile and nod that it was like, ‘No. Not here. Not in my space,’” she said.

Some would say there is no “my space” on the internet, no pun intended. But there is when you create one for yourself. And that’s what Price’s Twitter is. Hell, that’s what all our Twitters are. It’s a place to voice your thoughts and opinions, even if that’s to say “get out of my face.” Instead of saying how Price should’ve handled it (“ignore him, block, respond, close the app, etc”). We should’ve let Price be human. Let her be angry. Nothing she said involved hate speech or socially problematic ideology. It doesn’t call for her firing.

One of her co-workers, Peter Fries agreed with her stance, writing: “Here’s a bit of insight that I legitimately hope he reflects on: she never asked for his feedback,” among other comments.

He too fell victim to the hellfire that would ensue. Kotaku’s Nathan Grayson details the online escalation:

Guild Wars 2 fans did not take this kindly. In the following days, the MMO’s subreddit exploded with threads about the incident, with many calling for Price to be punished or fired. Some even threatened to stop spending money on the game until the situation was “resolved” in a way they found suitable. The issue also found its way onto Gamergate subreddit Kotaku In Action, a community that’s gone after Price in the past. All the while, people rained down insults on Price, accusing her of being an “SJW screaming child,”playing “the vagina card,” and other nastiness of the like.

In short, those who were angry weren’t coming from a place of wanting kindness and communication. They came from their own anger. But what’s more important, sticking by your employees or pleasing a vocal minority?

This is how we got here, to ArenaNet president Mike O’Brien’s statement:

Recently two of our employees failed to uphold our standards of communicating with players.Their attacks on the community were unacceptable. As a result, they’re no longer with the company.

What happened can be discussed at length but the answer is clear: either 1) ArenaNet always had a problem with these employees and used this as an excuse to fire them. 2) ArenaNet would rather cast out their employees than ignore a toxic minority.

Regardless of why they made the decision, the message they’re sending is if fans complain enough we’ll get rid of them. All this does is empower angry entitled players and make employees feel paranoid and unsupported.

Calling for someone to be fired is the ultimate version of “can I speak to your manager?” And any good boss is going to have their employee’s back at that moment. But they didn’t and it’s indefensible.

Once again, you don’t have to agree with how the conversation ensued but to be fired over it shouldn’t even be a possibility. If everyone who said something mean on Twitter most of us would be fired. This is one very dangerous precedent to set in the games industry.

Previous articleStar Wars: Episode IX to Add Keri Russell to All-Star Actor Line-Up
Next articleWhy Those Pearl and Marina Amiibo Are Worth Buying