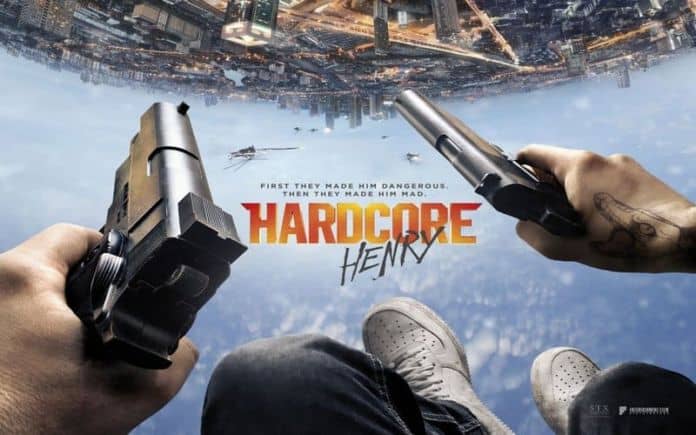 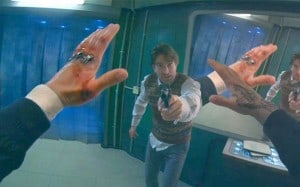 Do you guys remember the movie version of Doom? While that entire film was pretty horrendous, the one aspect that stood out was a five-minute first person scene where we saw through the eyes of the lead character. Hardcore Henry is essentially that scene, blown up into a full 90-minute spectacle.

Looking at the film, it’s excessively easy to dismiss, given the rail-thin plot and a nonsensical cast. Unlike most films that act through first person (mainly of the found footage variety), Hardcore Henry lacks a main emotional anchor for us as viewers to relate to. He doesn’t speak throughout the entire movie, and we don’t actually get a single glimpse of what he looks like until the last few minutes of the movie. Though his name is Henry, he is more of a vessel for the audience to see through themsevles. He’s a silent protagonist, just like the plethora of famous video game characters he homages, bent on the singular idea of seeking revenge against the ones who wronged him and his wife. Yet, for all its simplicities, Hardcore Henry may be one of the most fascinating art-house action movies made in recent memory.

The issue with this movie is that it throws out all of the “traditional” formulas and theories we come to expect from a film. By making the leading role essentially the audience, Hardcore Henry throws out our ability to get invested in his actual conflict. Unlike a video game, we are not making these actions or participating in his decision process. The emotional weight of these choices throughout the 90 minute run time is out of our hands — that is very much the point of it all, though. We are not supposed to get invested in Henry’s story; he is nothing more than a shepherd from scene to scene.

The real emotional weight of the movie rests on his insane partner, Jimmy (played brilliantly by Sharlto Copley). Much in the vein of Mad Max:Fury Road, the title character is not the one with his name on the marquee. This is very much Copley’s movie, as his development is far more intriguing and nuanced. At the risk of spoiling a major plot point of the movie, I won’t dive too deep into why Jimmy seems to have a range of emotions/archetypes, but needless to say, each one is fantastic. Hardcore Henry really highlights the amazing range that Copley has an actor, as his caricatures are not cliche’s of certain archetypes of people, but our perception of it. Jimmy is very much the Dante of this film, with Henry acting as the blood-soaked, bullet-riddled Vergil guiding us along. 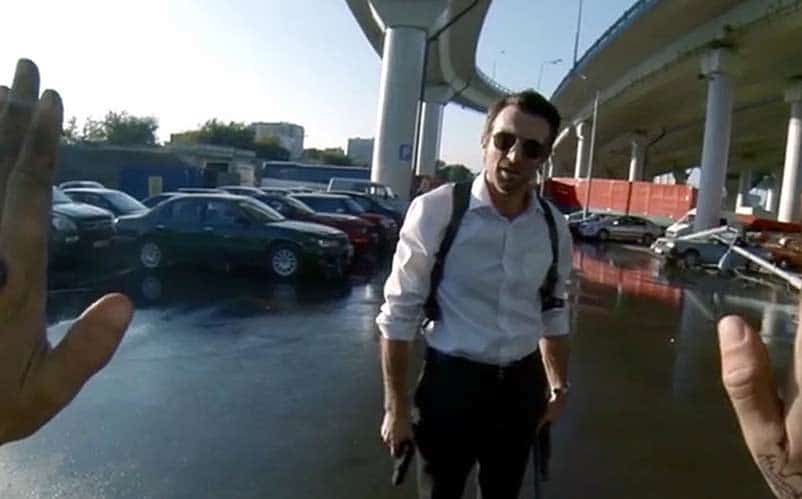 Sadly, the other characters in this world are not as well developed, as both his wife (Haley Bennet) and main antagonist ,Akan (Danila Kozlovsky), receive very little in terms of backstory. This is far more noticeable with the main villain Akan, as his actual “powers” are literally never explained in the movie. This kind of information is important for world building, as it remains fairly unclear how Akan is able to lift things with his mind while no other cast member can. There are subtle hints what effects these powers have on him, but his motivations are fairly uninteresting. Despite his eccentricities, Akan is a fairly cookie cutter main villain. Henry’s wife is also fairly wooden in both her performance and narrative arc. She’s the princess waiting to be rescued by Henry and really only offers that much to the film’s overall plot. Despite some minor character turns at the end, GBennet and Kozlovsky give less than memorable performances.

The real dividing point with Hardcore Henry is going to be the structure and plot itself. As I mentioned previously, the film plays out very much like a video game in both form and function. This is a film that rarely slows down, and when it does, director Ilya Naishuller makes the most of it by explaining some of the plot’s more confusing moments. Yet, there is brilliance inside of all this chaos, as the film is very much visually driven. You won’t have long extended dialogue sequences (except for a fantastic one featuring Jimmy near the latter half of the film). Instead, prepare to get lost in the confusion of the movie. This is very much the point, as the story is meant to unfold to us at the same time it does for Henry. We will never know more than him and never know less than him; you will understand when the movie is ready to let you in on the secrets.

For you video game fans, the homages and layout of the movie may feel far more similar than you may initially expect. Scenes in the movie play out very much like different levels that span the gambit of familiar setups and FPS tropes. There’s the tutorial scene, the on-rails scene, the chase scene, etc.  Hardcore Henry homages a variety of both new and old action games, such as Call of Duty 4, Mirrors Edge, and Deus Ex. Its deep connection to video games will very much be one of the defining factors of your opinion on this film. There’s a plethora of references, nods, and homages to the medium that offer a deeper understanding for how the movie plays out. However, this is a double-edged sword, as it makes Hardcore Herny‘s plot incredibly easy to predict. Though this detracts from any big, emotional moments from hitting, the simplicity for a movie like this is very much needed. 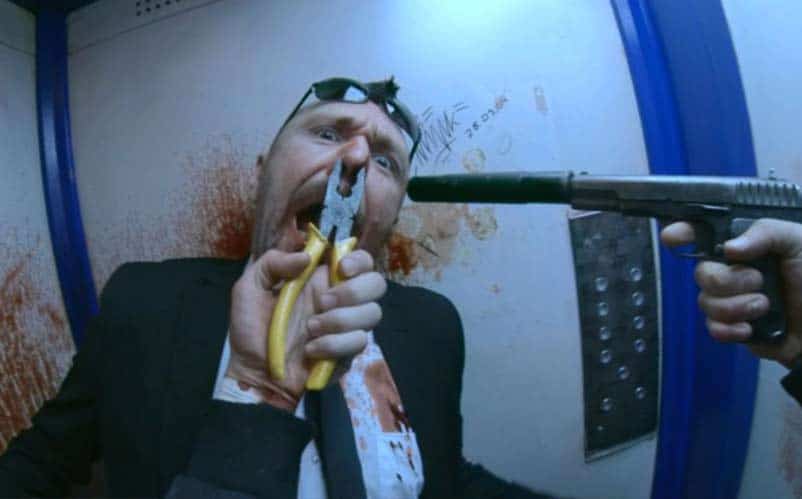 Though the burning question for most is how does the first person camera perspective work in terms of the movie itself? Hit and miss, to put it frankly. While the gun battles and moments of dialogue (most of which is one-sided) are enjoyable to watch, certain parts of the film are unbearable. This is particularly obvious in any chase scene or hand to hand fight, as motion blur is a real and problematic thing. The fights and movements are extremely hard to follow sometimes, detracting from the wild action that it never lets go of. One particular scene in a dark strip club is the most notable example of this, as you may have literally no idea what Henry is shooting at or doing from time to time. Most gun battles though are quite fun to watch and there is a real spectacle in all of this violence and gore. Which, let me clear, there is a lot of in Hardcore Henry. This is a very, very, bloody movie.

In the end, though, Hardcore Henry is a film that takes a massive leap of faith. It’s an action film that is not afraid to proudly take risks with our preconceived notions of what a shoot-em-up movie should be. While I am almost certain this will spawn a plethora of lame, one off copy cat movies; Hardcore Henry should be at least commended for taking the first step. Yes, it had some fairly noticeable flaws throughout, but I couldn’t help but be entertained by the zany action and Copley’s amazing performance. Sometimes, the most enjoyable type of action movie is one that takes a chance. Hardcore Henry fires from the hip and hits most of its targets.