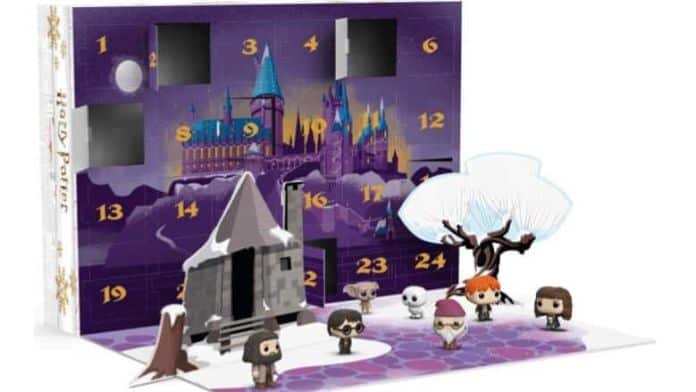 Despite the price tag, this Harry Potter advent calendar from Funko is going to sell like hotcakes. Pre-order it now and it will ship November 15th – and pray you’ll get it on or before December 1st.

As far as the product listing goes, we can see that some Pop figures are guaranteed to be included. Coupled with a lovely winter scene to display them on, you will receive the miniature versions of Dumbledore, Hermione Granger, Ronald Weasley, Harry Potter, Dobby, Hedwig, and Hagrid.

All of which are entirely unique from any other Harry Potter series from Funko. Hermione is holding a book and wearing a skirt, Ron looks incredibly normal in his school uniform, Harry’s robes are closed and he is equipped for the winter with a scarf and gloves. Dumbledore is how he looks in the first and second movie, bright purple cap and those lovely half-moon glasses that define him as a character in the books.

The advent calendar box unfolds into small pop-up of Hogwarts grounds, including Hagrid hut, the Whomping Willow, and the castle itself in the background. Everything is tastefully covered in snow and done in the same art style as the Funko figures themselves.

There are 24 figures in total, and judging by the dimensions of the box, we can assume that the figures are approximately an inch tall. If you have a Christmas village, such a small size might be the perfect addition! Or this can be the beginning of your own personal Harry Potter Christmas village – what better way to display all 24 figures?

Once again, this advent calendar is priced at $54.99 USD and can be pre-ordered now on Amazon or Entertainment Earth. They will ship November 15th, so get yours now before they run out as such an advent calendar is sure to be very popular!