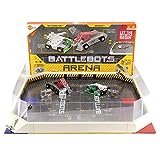 If you loved the carnage from the old Battlebots show (which received a revival last year, as will BBC’s Robot Wars), be prepared to have some fun of your own at home, as Hexbug will soon release smaller RC versions of some of the most popular Battlebots.

The company first offers a $70 Battlebots Arena similar to the one seen on TV, except this is a much smaller, 20 x 20 inch version. It comes with four clear plastic walls, two corners that have manually operated hammers, and similar graphics to the real-life arena. The Hexbug arena also comes with two miniature RC Battlebots, each of which has its own wireless controller. The two robots included with the arena kit are Bronco, which has a flipping arm that can be used to flip your opponents up and over, and Tombstone, which has a spinning blade on the front. Witch Doctor is also available to be added for an extra $30, and each bot is available separately as well. Of course, the smaller versions of these bots have (unfortunately) been made safe for the home, meaning you won’t see any smoke, sparks or flames after a beatdown. Instead, they feature panels and accessories that come flying off in battle and can be reassembled after each fight.