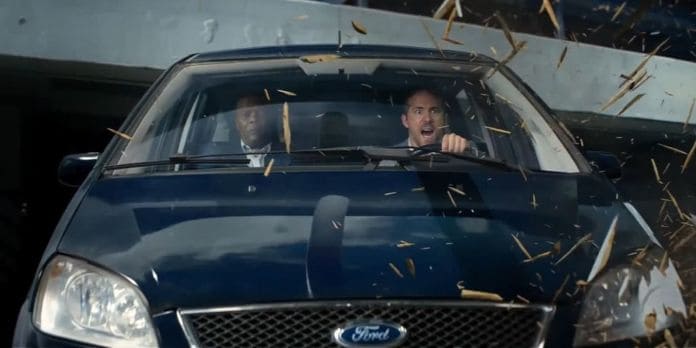 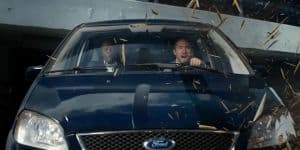 When it comes down to it, The Hitman’s Bodyguard offers nothing more than some great action scenes and wonderful lead chemistry. While that would normally cripple any other action film, the witty dialogue and solid pacing helps keep this movie’s head above water – barely. Directed by Patrick Hughes, The Hitman’s Bodyguard is a simplistic film that doesn’t offer much beyond the face value, but if you look past the faults there’s some fun to be had. Just don’t expect any surprise performances, deep character building, or unique plot twists that help frame the chaos beyond the black and white story.

The Hitman’s Bodyguard follows disgraced Interpol agent Michael Bryce (Ryan Reynolds) who is tasked with protecting one of the most dangerous assassins in the world Darius Kincaid (Samuel L. Jackson). Kincaid has agreed to testify against the psychopathic Russian President, Dukhovich (Gary Oldman). Bryce has to transport Kincaid to the courtroom before a specific time, all while being hunted by Dukhovich’s henchmen. There’s also two sub-plots regarding both Kincaid and Bryce’s personal relationships, but only the former is intriguing in any way.

That’s not to say Bryce isn’t a fun character, but there is a superficial depth to both him and Darius. Instead of just leaning into their respective character archetypes, The Hitman’s Bodyguard tries to make them genuinely compelling. However, this is floundered because where they end up is so predictable that you’ll know how each one changes by the first half hour. There are no interesting character turns and Bryce’s strained love life is not nearly as entertaining as Kincaid’s love of hotheaded bad ass Sonia (Salma Hayek).

Bryce’s relationship with Interpol agent Amelia Roussel (Elodie Yung) is about as generic as it comes. His workaholic mentality is nothing new and it feels like a retread of a thousand other movies we’ve seen before. Yung is also not great here and her emotional range never seems to go beyond frustrated or distraught. This becomes especially true when compared to the other love interest Sonia, who is way more enjoyable. Hayek owns this role and the way that Kincaid meets her is absolutely one of the best scenes in the movie. It’s a shame that she doesn’t have more screen time, especially during the latter half of the movie where she disappears until the third act rolls in. 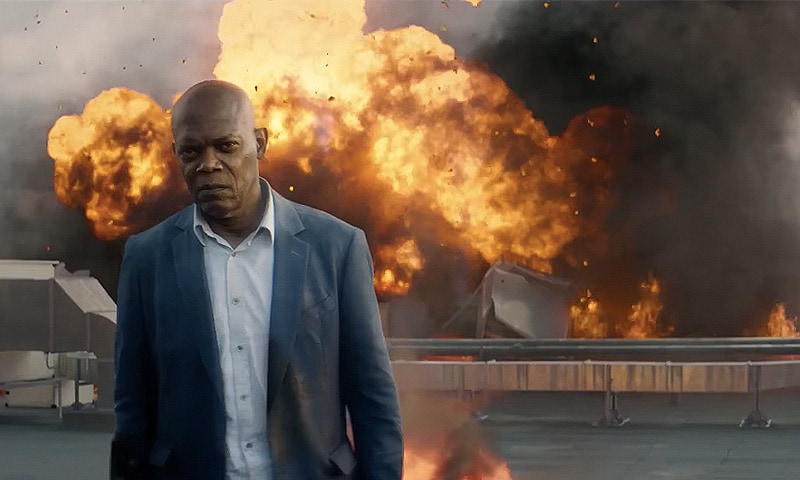 Oldman’s villain is probably the most forgettable as he never goes beyond being evil for the sake of evil. It’s clear the film wants to frame him as a man trying to protect his people, but this falls flat on its face. Dukhovich is so cartoonishly evil that you’ll think you’re watching an episode of G.I. Joe. Again, if the movie leaned into this idea it would be fine, but The Hitman’s Bodyguard tries to humanize someone who literally kills children in his first scene. It also doesn’t help that Oldman is in maybe 5 scenes top and his big climactic showdown feels underwhelming when compared to the rest of the film.

Thankfully, the chemistry between Jackson and Reynolds may be some of the best in the buddy-action genre. While they are simply playing the exact type of characters you’d expect. both are clearly having fun and deliver near perfect comedic timing. Jackson is the standout, as he basically takes every loud mouthed, vulgar character in his career and rolls them up into one person. It’s hard not to crack a grin and the levity that this duo offers helps save the entire film from disaster. Jokes are delivered consistently and there are some great payoffs, specifically when it comes to them trying to show off their killing capabilities.

If you’re going for the action than you won’t be disappointed as their are some well composed fight and chase scenes. Hughes has always had an eye for these types of scenes and it absolutely shows. While the action might be more spaced out than some might expect, the final third act is nothing short of pure chaos. There is virtually no shaky camera and the way Hughes uses geography is incredibly clever for a boat chase. However, none of the action isn’t something you’ve seen before, so don’t expect any big set pieces that come out of left field.

Ultimately, The Hitman’s Bodyguard is a fun, but forgettable movie that won’t offer any huge thrills. This isn’t the best action movie to come out in 2017, as the basic plot, flat villain, and push to try and be something it’s not ultimately hinders the entire film. While the lead chemistry is absolutely fantastic, both of the main characters offer predictable and boring arcs that go absolutely nowhere. Even though you can see virtually every twist a mile away, Hughes action direction keeps the movie from ever slowing down. The Hitman’s Bodyguard may not take the action genre by storm, but it’s a serviceable movie worth renting in a few months.

Previous articleHot Games of 2018: The Ultimate List
Next articleJunkertown: Check Out the New Overwatch Map