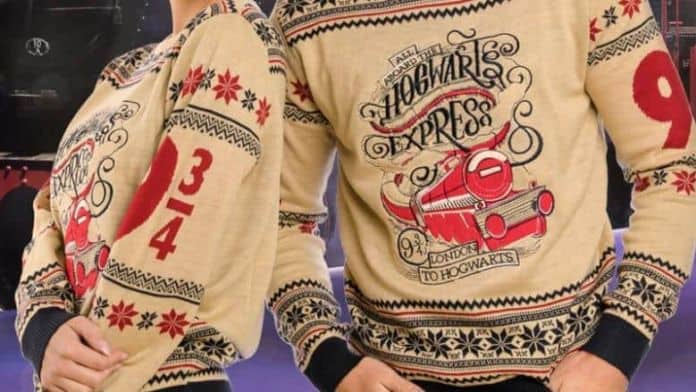 The steam from the engine is coming out in black curls, forming the words “all aboard the Hogwarts Express” and at the bottom is written, “9 3/4 London to Hogwarts.”The rest of the sweater is decorated with black snowflakes and red lines. On the sleeve is featured “9 3/4” is large red lettering.

Despite the pale brown color, the illustration of the Hogwarts Express is very well done and is sure to bring everyone back to that first moment… Hagrid just handed Harry his ticket and promptly popped off. Poor Harry is left extremely confused and wondering how platform 9 3/4 even exists.

Despite knowing how silly his question is, Harry risks asking someone for help. Unfortunately, they just laugh in his face and move on. Luckily, that is the moment Harry encounters the Weasleys – namely Fred and George running at a brick wall and disappearing.

Mrs. Weasley, bless her heart, automatically helps Harry. Just give it a bit of a run, she says, like it’s that easy to trust a magical brick wall not to hurt you. Harry meets Ron right then, and they are fast friends. Nothing like bonding over a train platform.

The moment is repeated later, in the second book. Ron and Harry run at the brick wall, more than ready for summer to be over – only to nearly hurt themselves when the wall turns out to be quite solid. We all know how they get to school after that, but Harry Potter fans will always remember their first glimpse of the Hogwarts Express and platform 9 3/4.

Remember the moment well with this Christmas sweater for only $64.99 USD.