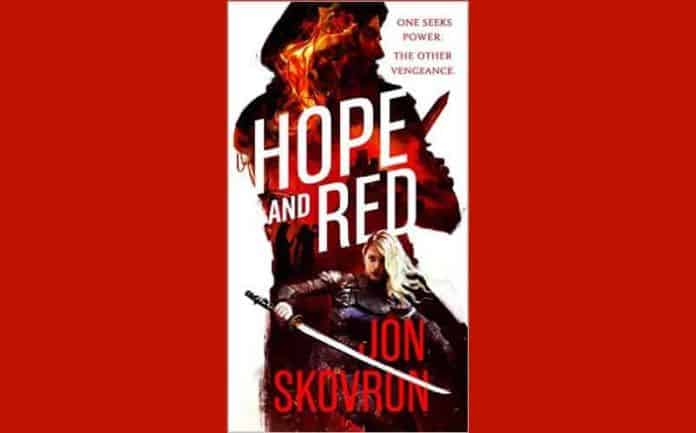 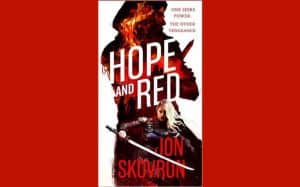 Hope and Red is the first entry into brand-new high fantasy series The Empire of Storms Trilogy by Jon Skovron. I was drawn in by the book’s description, and while there are some really enjoyable elements about it, unfortunately, I was ultimately underwhelmed. Skovron has built a truly interesting world here, but it is one that would be better served by being much more developed. The book was intensely focused on Red and Hope’s experiences; they are the titular characters, but still, very little information is given about the larger world in which they live.

The plot spans a rather large amount of time and consequently moves rather slowly. It tries to touch on too many things and ends up glossing over important details in the process; for example, Sadie’s time as a pirate made little sense and probably could have been omitted entirely. When she and Red initially steal a ship, neither has the faintest idea how to sail one, but they somehow manage to make it home with no trouble and only a vague explanation. The action also occurs on a very small scale, although it is obviously setting the stage for larger events in the sequel.

Although Hope and Red are likable as individual characters, the relationship between them felt entirely unnatural and forced. Skovron presents it as almost a love-at-first-sight scenario like they’re fated to be together, but there is little to no actual chemistry between the two characters. Of course, every other character in the story can see it, and takes every opportunity to point it out, although the two themselves are oblivious. Had they just been comrades-in-arms, it probably would have been a lot more believable and therefore enjoyable.

Red’s involvement in Hope’s quest for vengeance seems rather contrived as well; right after they meet, well towards the end of the book, he discovers that people in his neighborhood are being sacrificed to biomancer experiments, giving him a convenient excuse to follow her.  Which is the best way to describe the entire plot, really – just a bit too contrived. Everything that happens is a little too convenient, we are only given the information that is absolutely necessary (often in the form of an info dump), the relationships don’t necessarily feel natural, and the action is rushed. Also, the secondary characters are horribly one-dimensional and exist only to further the plot.

There are some fun elements; the book as a whole has a delightfully swashbuckling feel, the slang is amusing and inventive, and the main characters’ backstories are fairly interesting. Hope’s chapters hold far more interest and have an entirely different tone than Red’s; hers made me want to read more, and his often made me roll my eyes. My only complaint with Hope is that she is the archetypal “strong female character”: a female struggling to make her way in a “man’s world”, excelling at what is typically a man’s profession, and behaving generally as unfeminine as humanly possible. This seems to be the default model for male writers trying to include such a character, and Skovron falls into that trap.

Brigga Lin is a more interesting character by far, but the book spends far less time focused on her. The fact that she is transgender and uses biomancery (the magic system in the book) to achieve a sex change in order to unlock components of the discipline not available to men is fascinating. This is not her only reason, of course, and the author does what I think is a reasonable job at describing her feelings of body dysphoria prior to the change.

To conclude, this book does not inspire any particularly strong feelings one way or the other; both the quality of the writing and the end product are entirely mediocre. It may very well be worth a read for someone seeking a lighthearted, jovial sort of fantasy adventure that doesn’t pay particular attention to detail or make one think too hard. The quality of the actual writing is decent, and the concept had a lot of potential, but overall the whole thing was a bit too ambitious.