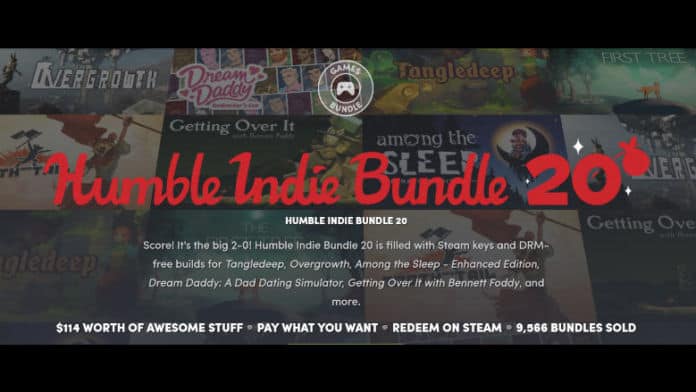 The Humble Store has a fresh deal for you price-savvy gamers out there, and this time it’s a milestone. The outlet is celebrating The Humble Indie Bundle 20, offering seven indie games at an insanely low price.

The basic tier of The Humble Indie Bundle 20 allows you to pay whatever you’d like to earn DRM-free Steam keys for a trio of titles. They include The First Tree, Tangledeep and Among the Sleep Enhanced Edition, all three of which boast “very positive” review ranks on Steam.

If you’d like to double down and get three more games, you can do so by paying more than the current average on the site. As of publish, that amount would be a mere $3.31. And The Humble Indie Bundle 20 would then include Getting Over It with Bennett Foddy, Tooth and Nail, and Dream Daddy: A Dad Dating Simulator Dadrector’s Cut. The latter two are both rated “very positive” on Steam, while Getting Over It with Bennett Foddy has earned “mostly positive” reviews.

If you feel like splurging and decide to toss at least $10 toward The Humble Indie Bundle 20, you’ll also earn yourself a copy of Overgrowth via Steam. It too is rated “mostly positive” amongst Steam reviewers.

The Humble Indie Bundle 20 offers support to Extra Life / Children’s Miracle Network Hospitals with each purchase. And you can help even further by paying a bit more over the top and earning yourself soundtracks to each of the above games.

You have about two weeks left to take advantage of the above options if you’re interested. The Humble Indie Bundle 20 wraps up at 12:00 p.m. Eastern, 9:00 a.m. Pacific on Tuesday, March 19th. A bunch of new games to play, a cheap price, and a great charity. Seems like a no brainer, right?

Want more indie games to play? Check out what indie darlings are coming in our list of the upcoming indie games of 2019.