Injustice 2: Everything We Know

Games
By Bobby Bernstein
Last Updated on May 7, 2020
Geek Toys

Injustice 2 has finally been officially revealed, after two years of being rumored. Now, NetherRealm Studios, creators of the original Injustice, has crafted a new entry for the franchise, and after the reveal trailer, we’re at a full hype level 3000.

We don’t know a lot about the upcoming sequel just yet, but we do have a few details worth noting. We’re anxiously awaiting a full Injustice 2 roster reveal, as well as more details on what exactly this battle armor mechanic will be. Slowly but steadily, we’re getting new Injustice 2 news, and we’re going to keep you posted right here.

For now, here’s everything we know about Injustice 2.

*Note: This is a dynamic post, meaning it’s going to change and be updated as we get more information. Stay tuned!*

The new Injustice game is being developed by NetherRealm Studios, makers of the original and creators of the most recent two Mortal Kombat games. The game is published by Warner Bros Interactive, and as of right now, the game’s age rating still has a “Rating Pending” status. I’ll note that Injustice: Gods Among Us was rated T for Teen, and it’s likely that the follow-up will follow suit.

The new game will bring an all-new style of gameplay to the franchise, most notable of which is a loot-dropping system they’re simply calling a “Gear System”. This Gear System will offer character-specific costume pieces and weapons that will give characters unique stats and abilities, similar to how loot drops would work in an RPG. Loot drops after every match, and they’ll contain items that will allow players to customize their character, strengthen specific abilities, and increase some of their stats (and even new moves!!).

Each character will have the ability to carry five of these loot items at once. Each character can have five different gear loadouts that can be easily switched at the beginning of every match.

Also interesting is the inclusion of the option to play online without the new gear mechanic, giving players another option in the matchmaking menus. The online code will be the same as Mortal Kombat X.

We don’t know how many DC characters will be on the game’s final roster, but it looks to be pretty extensive (at least, so far).

The Injustice sequel will continue the story of its predecessor, set in an alternate universe where the Joker unleashes a nuclear bomb on Metropolis, tricking Superman into killing Lois Lane and his son. Superman begins a dictatorship, and Batman leads a group of rebel forces, causing DC’s greatest heroes and villains to take sides. In Injustice 2, Batman will work together with his allies to “put the pieces of society back together while struggling against those who want to restore Superman’s regime.”

There’s also going to be a “new threat” introduced that will threaten the Earth’s existence (of course, why wouldn’t it?).

NetherRealm promises a “massive roster” of DC superheroes and villains for the Injustice sequel, which the developer says will offer the “largest DC roster ever in a fighting game.” So far, we only have confirmation of some of the heroes and villains that will appear in the upcoming 2017 game. Thanks to the reveal trailer and subsequent trailers thereafter, here are the confirmed Injustice 2 characters:

You can read more about Fighter Pack 1 and how to purchase it here.

Characters We Want to See Added: 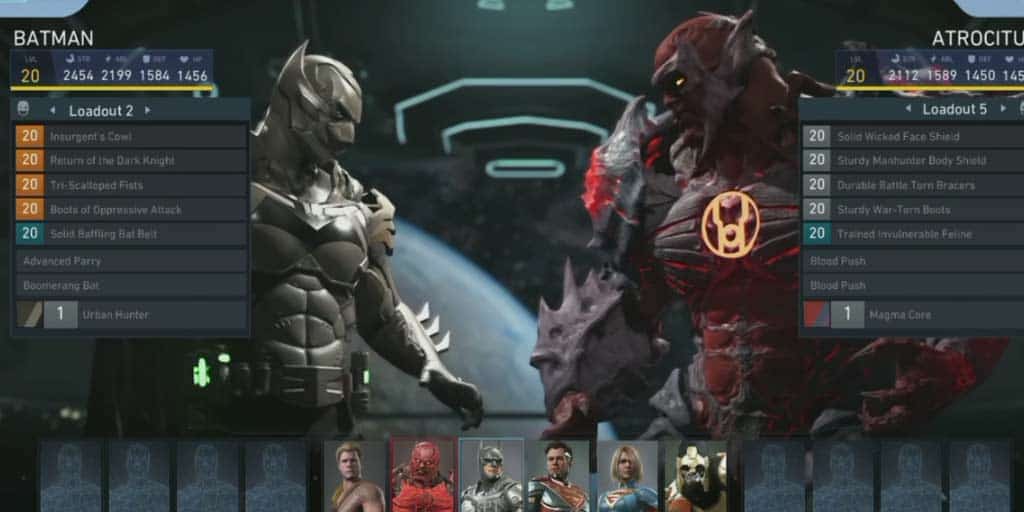 The Gear System will use RPG-like mechanics that will reward players will loot drops every time they play. Every loot drop will earn character-specific gear that will outfit and power up your roster. This will allow you to create your own line-up of heroes and villains tailored to your style of play, which can be “vastly different” than your opponents. Apparently, the changes will begin being noticeable after just a few play sessions in.

If you’ve downloaded Injustice: Gods Among Us the mobile game, you can now unlock the Injustice 2 versions of Superman and Aquaman in the game’s challenge modes.

We don’t have many specifics about the Injustice 2 arenas at this time, but we know that they’ve “evolved in scale” and that they’ll include iconic locations such as Metropolis, Gotham City, and Atlantis.

We’ll post Injustice 2 screenshots here as we get them. There aren’t any available just yet, but stay tuned.

As expected, there will be an Injustice 2 mobile game, and it will feature new features, modes, and an all-new combat system.

There are way too many Injustice 2 trailers and bits of gameplay footage to include it all in the first page of information. So, we’ve decided to move them all to their own dedicated trailer page. Below, you’ll find YouTube embeds for all of the game’s trailers and gameplay videos, and we’ll add in all of the new vids as they come in.

Preorder Injustice 2 on Amazon right now. Prime users get 20% off.

Free Poster with Pre-Order of Injustice 2 at GameStop.com. Shop Now!