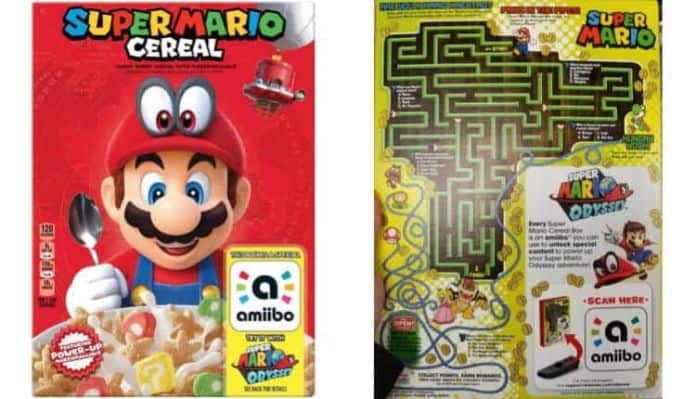 Nintendo and Kellogg are proud to announce their partnership in making the Super Mario Cereal, available now in the US. The cereal consists of power-up shaped marshmallows and plain cereal stars, much like Alpha-bits.

Unlike most food merchandise based on games, this one does not include a simple movie ticket or cheap toy. Super Mario Cereal includes an amiibo “sticker,” which is an NFC code provided on the back for your Joy-Con to read. There is no word yet on what the amiibo actually provides beyond unlocking “special content.” You’ll have to let us know in the comments below if you purchase one.

The cereal is currently confirmed to have appeared at Target in the US, hopefully it will soon spread to other stores. If you are outside of the US, Nintendo has made it clear that there are no plans for the cereal to arrive in the UK or elsewhere.

The back of the cereal box is full of little activities, like a large maze, trivia questions, and a mini game where you follow a tangled string to the correct character or destination.

Some of the trivia questions are remarkably difficult if you haven’t been with the series since the beginning, like “what is Marios’ original name.” Luckily, if the parent buying it doesn’t know, the child is sure to find the answer easily on Google if they get stuck.

The last time we saw Nintendo and Kellogg team up like this was in the 1980s when the Nintendo Cereal System was introduced by Ralston Cereals. Perhaps the popularity of Super Mario Odyssey has spurned Nintendo on to spread out the merchandising like they did back then. We might even see Super Mario McDonald’s toys in the future. Wouldn’t that be quite nostalgic for those that remember acquiring such toys all the time from various food chain restaurants.

How Will Sharing Loot Box Odds Affect The Gaming Industry?