Knights and Bikes is based on the real-life friendship between the two developers, Rex (one half of Foam Sword) and Moo (programmer for the game). The setting of the game, Penfurzy, is based on Cornwall, where Rex lived at the time he met Moo. These two best friends came together on behalf of their respective developer studios, Foam Sword and Double Fine, to create a heart-wrenching story of two little girls trying to handle the cards life has dealt them.

As Rex explains in a press release, life certainly wasn’t easy in Cornwall; he sold his flock of sheep for his first computer. Times were changing, the economy wasn’t great, and a million other reasons kids aren’t interested in understanding. For the two main characters of Knights and Bikes, it was a great curse that was spreading and infecting their innocent island instead. A curse was something the kids could fight, something they could turn to while the adult world fell apart around them.

As a result, even though times were hard, Knights and Bikes represents one of the best times of Nessa and Demelza’s (Rex and Moo) lives.

Naturally, Knights and Bikes is made to be a co-op game where you must grab your own best friend and experience Nessa and Demelza’s adventures together. If your friend isn’t nearby for a local co-op, you can still play the game by yourself. In addition, you can also turn off co-op at any time during the game. 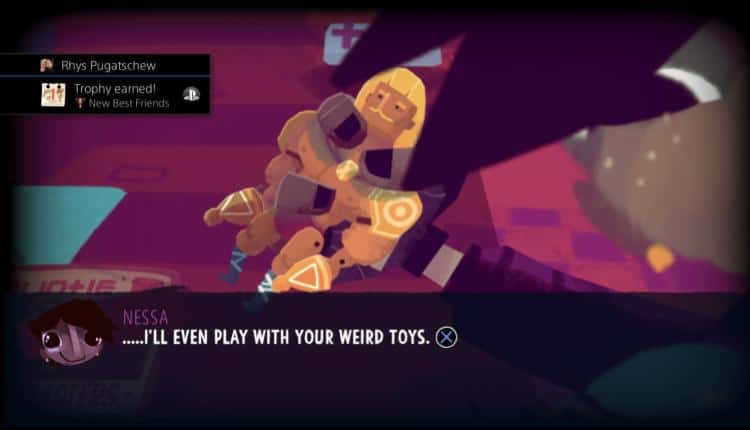 If you really want to understand Knights and Bikes and have it hit home from you, I highly recommend grabbing said best friend and insisting on playing it together. The game is relatively short, so you can assure them it won’t take too long either.

First and foremost, I must impress upon the reader that Knights and Bikes has a way of portraying lost and regained childhood that cannot compare to any other game. Nessa, though only a little bit older than Demelza, has clearly lost her childhood due to certain events. Yet, her choices lead her to Demelza, a sweet young redhead who has seen the bitter side of life too, but chooses to see it as just another adventure; a quest to be conquered and treasure to be found. Throughout the game, we see Nessa pretend for the sake of Demelza’s magical world, but as the story progresses she makes her own rules just as well as Demelza; she stops simply following along with her new friend and begins to create the world alongside her.

Knights and Bikes does all of this through exquisite storytelling, but most of all through the art style and sound. Unlike any other game I have reviewed, I cannot separate these two into their own categories; Knights and Bikes cannot have one without the other.

For example, when playing solo, the other character has a few idle animations with sounds that are all too relatable. Demelza will stick her tongue out and make a motor noise when she needs to catch up to Nessa. Nessa will roar and grit her teeth to do the same. Both noises and animations say far more about each character than anything the story could say. Never mind that both are very cute and endearing.

Knights and Bikes is a hand-drawn game, not unlike our beloved Cuphead, with a kind of paper cut out style akin to Paper Mario or Tearaway. If you’re not sure the style is for you, I can assure you that you will warm up to it. The expressions used for the main characters convey exactly the type of emotions you remember having as a kid. Personally, I am a fan of Demelza’s angry expression and her pure joy when she uses a boost on her bike. Both expressions make me laugh and smile every time, remembering the good times of my own childhood. 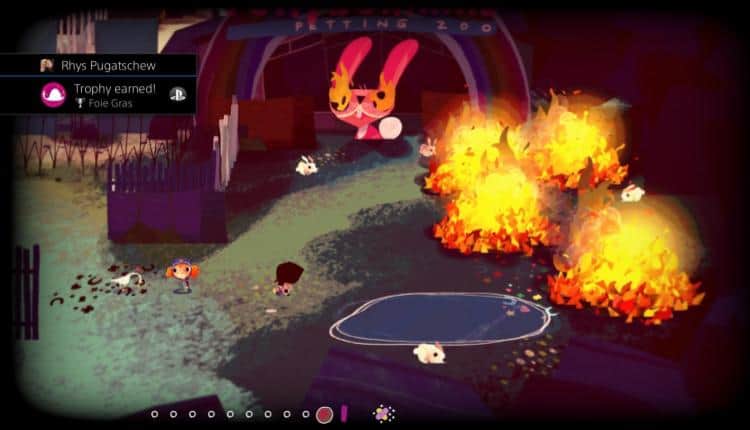 The illustrations in Knight and Bikes are often very beautiful. For example, the design associated with the curse blends blues and purples into a unique looking fog with transparent ghosts appearing and disappearing. It looks straight out of an Irish or Welsh fairy tale, or perhaps even an Arthurian tale. Needless to say, the art style suits the story very well and there will be plenty of moments where you and whoever you’re co-oping with will need to stop and take in the scenery.

Whether you grew up in the 80s or the 2000s, Knights and Bikes will remind you of the amazing adventures you had in your own backyard; whether it was fighting off the latest villain, cooking a five-course meal for the king, or sending Barbie on another camping trip with Stacy. Sometimes you build fantasies to cope with real life, and sometimes you need to while away the hours between lunch and dinner, just like Demelza.

In addition, Knights and Bikes has a replayability that most indie games like this don’t. I assure you that even after knowing the outcome of the story, you will come back to Knights and Bikes just to hear Demelza’s shriek of pure delight or her growl when unwillingly awoken in the morning. Needless to say, Knights and Bikes buries itself so deeply in nostalgia it would be difficult to find someone who cannot relate to it, even in an abstract sense.

If there are problems with Knights and Bikes, they are very few and most of them have nothing to do with the game itself. The biggest problem we had was the annoying process of linking a second controller to the PS4. The console would often simply refuse, abruptly switch accounts, and we would still be left with the use of only one controller. If Knights and Bikes ever arrives on the Nintendo Switch, I highly recommend playing it on there instead as inviting a second player is far more seamless and hassle-free. 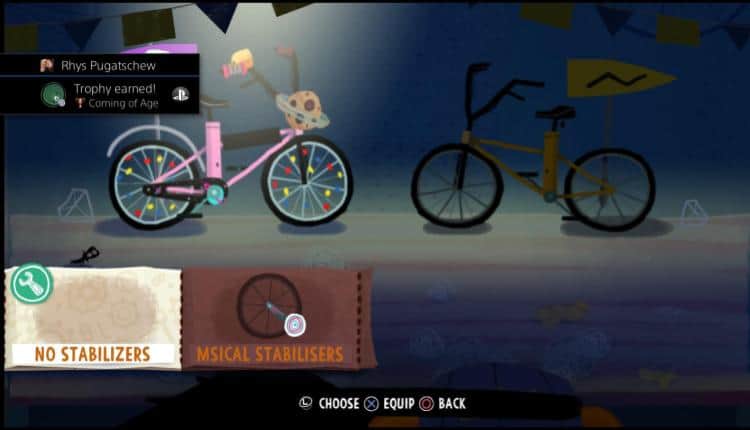 Otherwise, there were occasions when it was not terribly obvious what we needed to do next, but it never took more than a few minutes of wandering around before it clicked. That said, we did experience a major glitch in the game. At one point, we had accidentally (or not, we’re still not sure) dropped onto the other side of a gate before we were ready to. We tried to continue the adventure but were eventually blocked when we realized the one thing we hadn’t done.

We tried to go back, we reloaded the game, we restarted the PS4, everything. Luckily, before I could even send an email out to the developers, a patch came out that miraculously fixed our problem. So either other reviewers encountered the problem too or the developers were already aware of the glitch. Regardless, we were very glad to be able to continue this amazing game and conclude our adventures with Demelza and Nessa.