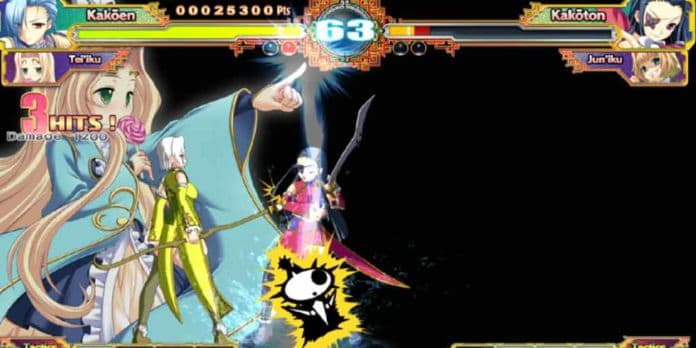 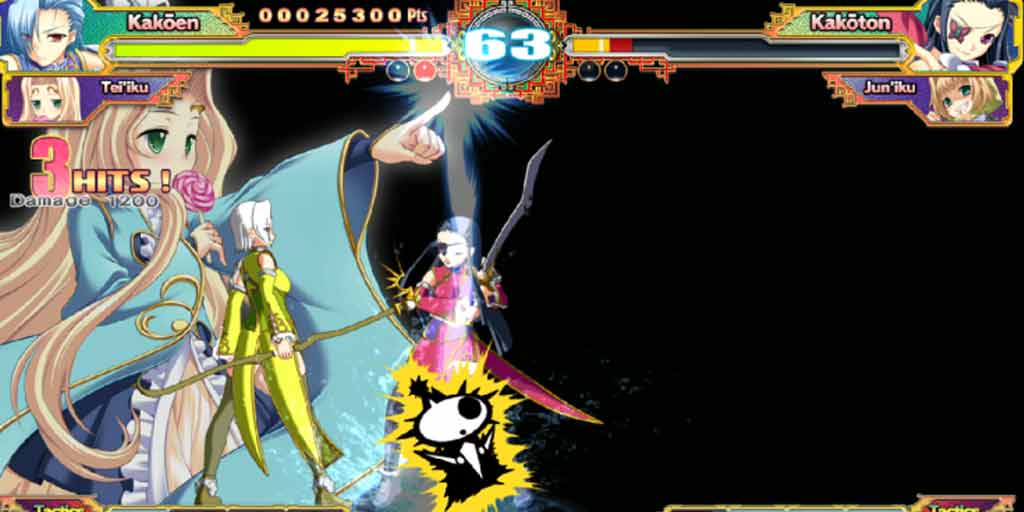 Whether the setting is a large scale tournament with hundreds of participants or a casual night on the couch, there’s no doubt that playing a fighting game is an exhilarating, competitive experience. Since the PS3 era, there has not been too many releases or localizations of anime fighting games, which is why I was very excited to see a Japanese arcade game titled Koihime Enbu arrive to the West. 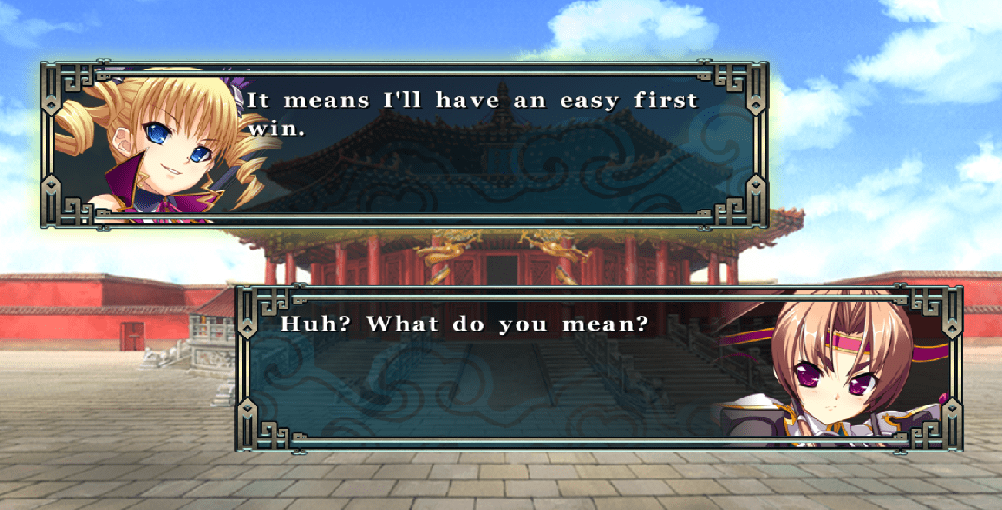 The Koihime series has an interesting story concept, creating a new spin on the classic Chinese story of the Three Kingdoms. Each of the girls in the story represent one of the major figures in Chinese history who were part of the Eastern Han Dynasty and Three Kingdoms period. Although this story has been done before in other media and games such as the Dynasty Wars series, Koihime Enbu offers an entirely new and all female perspective which makes it very interesting to read and play the story mode, especially as someone who has not played the visual novel.

This game deals with the cast either going on a quest or entering a fighting competition. It’s a concept that has been done before, but is brought to life by its various characters.

One of the best things about the game was the personality of its characters, which is shown through the dialogues in the scenario and arcade modes. Even though there wasn’t a ton of conversation, I was able to get a feel of how the characters interacted and presented themselves, from the confident fighters to the quiet and energetic ones — each with their own play style that reflected their personalities.

The scenario mode for Koihime Enbu does not explain the world very much, but that is expected of a fighting game. It isn’t virtually non-existent like many fighters, but also is definitely not Blazblue or Persona 4 Arena that have 40 hour story modes. This, perhaps, is my only complaint about the game so far. Since the series is very niche even with Japanese gaming/anime fans, I was not familiar with the cast at all.  I wanted to know more about the story and the world, but I’m glad that the story had more depth than a lot of fighters. It also would have been nice to see full character sprites to go along with the backgrounds, but the focus is definitely the gameplay, which very much makes up for that minor misstep. 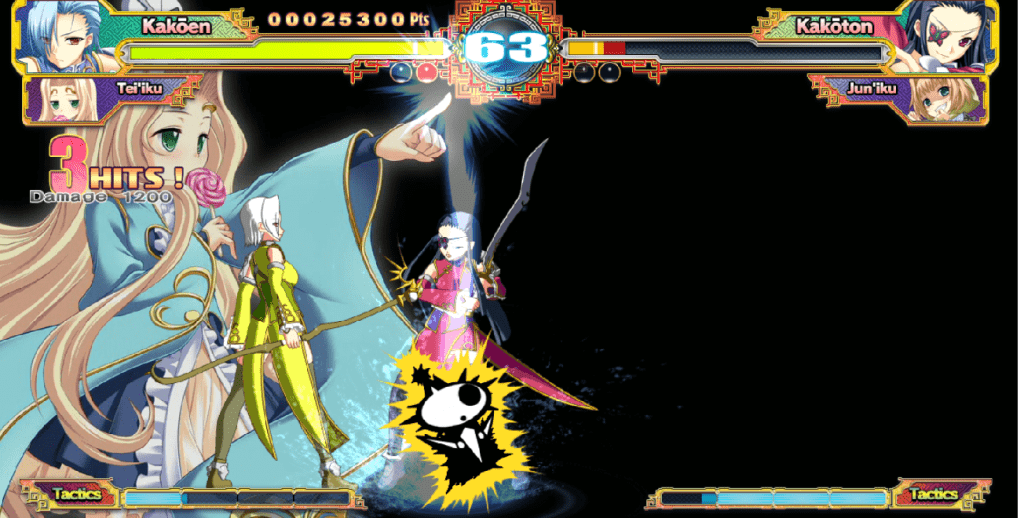 When thinking of fighting games, it’s easy to be overwhelmed by large amounts of complicated combos and attacks that require tedious practice and memorization to master. What’s nice about Koihime Enbu is that it has a very simple command list that is very friendly to newcomers, and even those who are not familiar with the fighting genre. However, this doesn’t mean that Koihime Enbu is too easy. For hardcore fighting game players, this game offers fast-paced battles where light (A button), medium (B button), and heavy (C button) attacks can be executed.

The goal of Koihime Enbu is to counter your opponent and make use of your special attacks to get an advantage on the battlefield. The counter system is creative, fast, and balanced.

One other gameplay element that is worth noting is its assist characters, which are great to utilize once you are able to fill up the gauge by accumulating damage on your opponent. By activating your assist character’s abilities and attacks, these fighters prove to be more than just background fighters and play a much bigger role in the combat system.

There are several modes to choose from the start screen. Among these are a scenario/story mode, arcade mode, a training mode, a gallery, online play, and local versus play. There is plenty of variety, and I especially made use of the training mode, scenario mode, and arcade mode. (You know, because what kind of fighting game doesn’t have an arcade mode? Ahem Street Fighter V ahem). The gallery is also a nice touch, offering fully animated sprites as well as screenshots for fans to look at after they have been earned in the various modes.

Although gameplay is very important to master in fighting games, it’s also nice to see beautifully animated visuals and hear an intense soundtrack while you’re playing. Koihime Enbu has a good soundtrack, from intense rock songs during fights to the traditional music playing during dialogue.

The visuals are also outstanding for a 2D fighter. The frame rate never dropped and everything was crisp. It was especially satisfying to use the assistant attack and see an epic animation come across the screen, and the final K.O. animations are also as well. As for the voice acting, the Japanese voices were very good. Although it would have been nice to have seen an English cast for the localization, the Japanese cast was excellent and brought the characters to life. 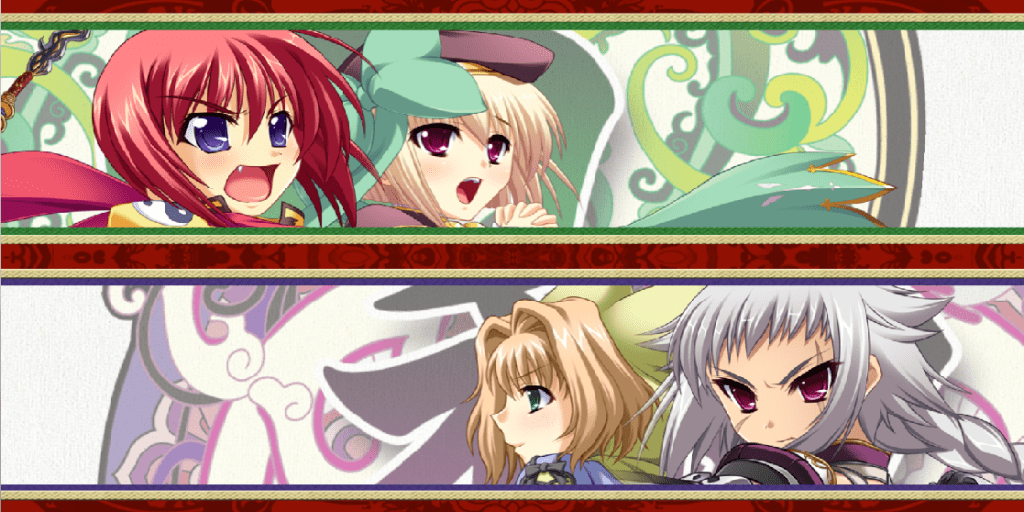 Sometimes, fighting games can be absolutely frustrating to get through and master, but Koihime Enbu offers an experience that is friendly to both newcomers of the genre and hardcore players alike. The story is interesting, but the game really shines through its characters, gameplay, and visuals. This game definitely has me interested in finding more out about the story and the character’s roles in the overall series. If you were thinking of picking up this anime fighter on Steam, it’s definitely worth it for any fan of the genre.

Previous articleGood Robot is a Good Game You Probably Missed
Next articleChildren of Earth and Sky Review
Emily Autenhttps://www.instagram.com/emcatcosplay/
Em is a writer and graduate student in Communications with a love for anime, video games, DDR, and the Persona/SMT series. She's also a cosplayer and enjoys hosting events and panels at conventions in her free time.