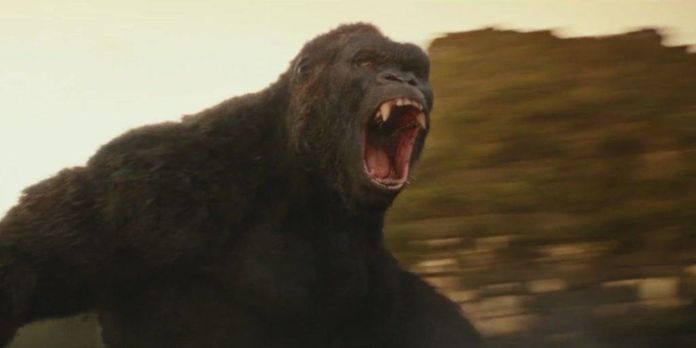 King Kong has always been an iconic staple of the movie industry since his debut in 1933, as the monster has received numerous makeovers, retellings, and reimaginings across various facets of popular culture.

His newest outing is in Kong: Skull Island a film that seeks to introduce the giant ape into his own cinematic universe that is made up of the various giant monsters such as Godzilla or Mothra.

While the film is technically the second in the series, it feels like the Iron Man of this particular franchise as it focuses more on world building and wacky fun than any series developments within the characters inhabiting it.

Yet, this is a rather smart movie by director Jordan Vogt-Roberts as it frees the film up to focus on what everyone is paying to see – giant monsters beating the holy hell out of each other.

Set at the tail end of the Vietnam War a secret government agency named Monarch seeks to persuade the U.S. Government to let them explore an uncharted island that is supposed to be the last bastion for where giant behemoths are hiding out.

The founder, Bill Randa (John Goodman), and his associate Huston Brooks (Corey Hawkin) are eventually allowed to piggyback with some fellow researchers to discover whatever is hiding out there before Russia does.

Along the way, they pick up journalist Mason Weaver (Brie Larson), professional tracker James Conrad (Tom Hiddleston), and a military escort led by Preston Packard (Samuel L. Jackson). In order to scan the island, the group needs to drop seismic charges which Kong takes exception to and attacks leaving them all stranded across the landscape forcing them to either be killed or escape.

It’s a rather basic narrative in terms of character and story development but this never becomes too much of a burden for Kong: Skull Island. From the very beginning, it’s made clear that this isn’t a film that is going to explore relationships between the humans outside of their stock archetypes and instead focuses more on the dangerous world they inhabit.

While this makes for a more fast paced, action oriented film it does sacrifice any big impactful moments outside of just brutality in fights. Characters and their outcomes are completely predictable once you spend a few moments learning their motives.

This robs Kong: Skull Island of making any of the heroes or villains worth investing any sense of hope in, as it’s abundantly clear who is going to live and die from the outset. 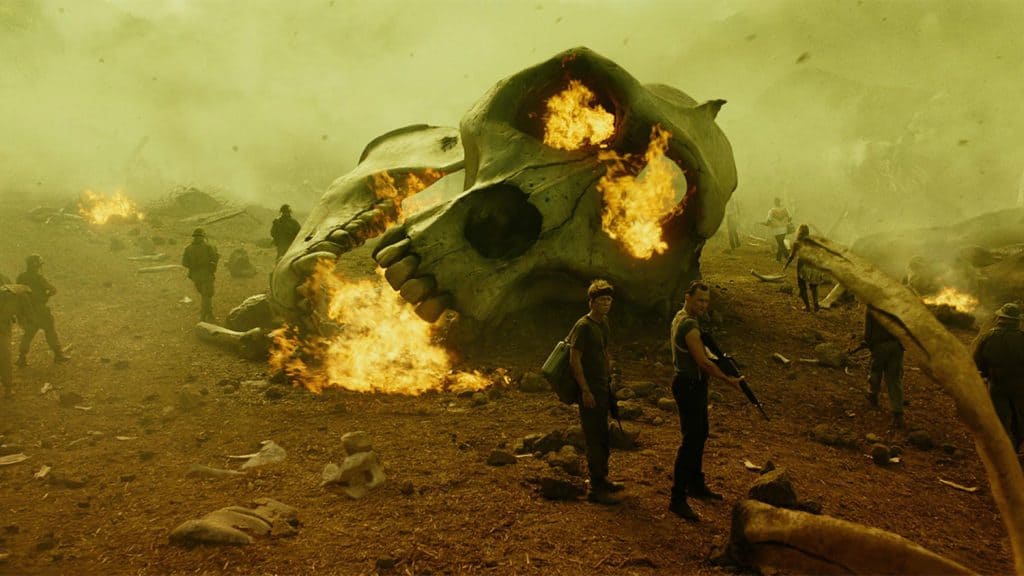 Jackson’s Packard is the worst offender as there is some interesting ideas within the military officer, namely his begrudging refusal to accept that Vietnam is over. Despite this being an interesting angle, from the moment Kong attacks the movie pretty much frames him at all times as the bad guy without really building on the emotional weight and trauma he is carrying.

There’s potential for this to be an interesting villain, but it’s quickly lost in all the noise and chaos of the movie.

The only fully developed character is actually a stranded World War II pilot named Hank Marlow (John C. Riley) who not only serves as the comic relief, but gives some genuinely heart-warming moments that help add a bit more humanity to the plot.

Riley gives a fantastic performance here and strikes a critical balance between funny and tragic that his character desperately needed. Even though the other performances are all solid, Riley steals every scene he’s in and takes complete command of the screen.

Yet, the thing anyone really cares about with these kinds of films is how much screentime does Kong have and are the giant monster fights worth it? Thankfully, Kong: Skull Island succeeds on both aspects with only a few hiccups when it comes to the actual pacing of the battles themselves.

Watching Kong fight off the predatory reptilian monsters known as Skull Crawlers is a complete delight as Vogt-Roberts shows every brutal moment of the battles. The only real problem is that some battles between Kong and the other creatures are way too brief, with beginning and ending engagements being the only lengthy fights.

It’s a bit jarring at times as Kong: Skull Island feels like it’s missing entire sections of the film that were removed for the sake of time. Some fights, such as one involving a massive spider, just end without warning or any real satisfying conclusion before the next scene is in full swing.

This becomes incredibly frustrating as it disrupts the pacing of the film and makes it feel like a disjointed mess at times. Vogt-Roberts never gives time for the movie to settle into a comfortable rhythm as entire sections just feel forced into the movie for the sake of it without and real context beyond “wouldn’t watching Kong fight a giant squid be cool?”

That’s not to say these moments aren’t fun, but Kong: Skull Island has a very bad habit of trailing off with various sub-plots that either never resolve or just feel forced into the movie for the sake of it. However, none of this really hampers Skull Island from being an enjoyable film, however, it’s very much a case of style over substance.

There isn’t a lot of meat on the bones and outside of the great visuals and fight scenes you won’t find yourself getting attached to virtually any character. Yet, this is a monster movie and Kong: Skull Island wisely understands that and opts to just be a big, dumb, loud action movie. It may not win any awards, but Kong: Skull Island is a serviceable entry for this future cinematic universe.