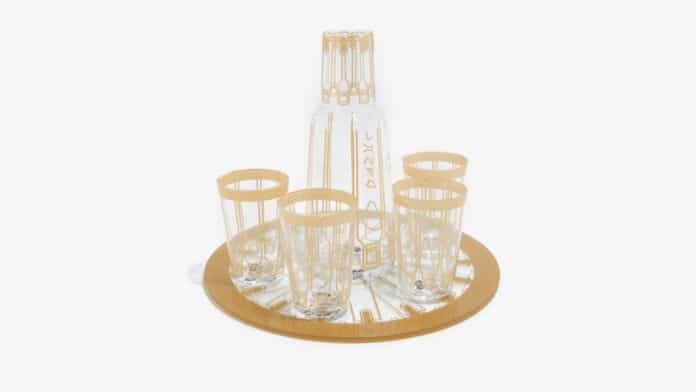 Everyone knows why Star Wars: Episode V- The Empire Strikes Back is widely considered to be one of the best Star Wars movies of all time. Is it the climactic revelation that Luke Skywalker’s father is Darth Vader, the living embodiment of everything Luke wishes never to become? Nope. Is it the romance between Han Solo and Princess Leia which ends with the former frozen in carbonite? Nah. It is the introduction of the coolest character in the galaxy: Lando Calrissian.

Now we can all drink in style with a glass set inspired by Lando’s drinkware in Solo: A Star Wars Story. If the Lando Calrissian Glass Set is good enough for a smuggler and the future toast of Cloud City, it is certainly an excellent choice for your dining room, game room bar, or outdoor patio.

While the set is inspired by a galaxy far, far away, you will notice a distinct Art Deco style to the glasses that should make them a hit even with houseguests who are not Star Wars fans. The gold color also gives each piece an expensive feeling to it. In total, the set includes 5 glasses and a tray. This includes a 36 oz carafe and four glasses each coming in at 4 oz. The glasses themselves are hand-wash only, so do not put them in the dishwasher or microwave. Simply hand-rinse the glasses and they’re ready for your next serving of blue milk.

The Star Wars Lando Calrissian Glass Set is the perfect way to satiate your thirst between rewatching Solo: A Star Wars Story at home and waiting for the next episode in the space opera in theaters this December. Now if we can just convince J. J. Abrams to sign some sort of legally-binding document that says nothing bad will happen to Lando Calrissian in Star Wars: The Rise of Skywalker, we might get a little sleep between now and winter.