Have you ever seen an announcement for a game and just thought to yourself, “Man, this game really speaks to me”? We, as gamers, receive no shortage of new game announcements every year, but rarely does a game get announced that appears to check ALL of the boxes. But, that’s how it felt when Livelock was first unveiled. It’s a co-operative (check) top-down shooter (check) that tasks you with breaking the cycle of an infinite war between machines (check), with the goal being to revive humanity (check).

And then, we got our hands on the game back in July with an early review copy. Shortly thereafter, the game was delayed indefinitely. At that point, we were thankful for the delay because we knew it could use some polish and some more time in the oven. But after jumping back into the game for its rescheduled release this morning, it appears to have been a fruitless delay.

The story is told through cutscenes and brief breaks in gameplay in which a character will appear on the side of your screen with some text. The cutscenes are awkward, and they’re made using the game’s engine — no CGI. Unfortunately, the game’s optimization has some issues (which I’ll get to later), so you’re immediately taken back by the low-quality animations and put-off by the visual side of things, and I found myself wanting to rush through just to get back to the gameplay.

As far as the awkwardness is concerned, Livelock‘s cutscenes are filled with cringeworthy writing in an attempt to make your Intellect sound “cool”. Unfortunately, despite the fact that he’s a talking robot, the cool factor simply isn’t there. The writing is filled with cliches, including an AI buddy, Watson, telling you that “the fate of humanity rests on your shoulders”, and the antagonist of the story basically telling your Intellect that his “efforts are futile”. What’s more, the enemy will use the term “scrap metal” as an insult..in a world filled with robots…how expected.

As far as the actual gameplay is concerned, you’ll play as one of three potential Intellects: a Hex, Vanguard, or Catalyst. Each plays differently, with the Hex serving as DPS, Vanguard as a tank, and the Catalyst as an efficient killing machine that uses precision and tactics. As one of these Capital Intellects, you’ll traverse from one map to another, tasked with taking out waves upon waves of enemies while trying to survive.

It’s easily classified as a Bullet Hell game, as you’ll try to avoid the attacks of the oncoming enemies, which is the key to surviving in Livelock. But, there’s a core issue at the heart of the game that basically breaks the game and its potential enjoyment: there’s no penalty for death. Once you die, you’re simply redelivered to your exact location via a drop pod. What’s more, the number of times you can die and respawn this drop pod is infinite. So, you can just keep chugging along, killing everything you can before dying, die, and respawn instantly. It creates the situation where there’s no reward for actually playing the game, no feeling of achievement when you clear a stage.

As you make your way from stage to stage, you’ll earn XP and level up your robotic character, unlocking new gear, weapons, armor, and paint jobs. You’ll find these items as drops in various random locations in each level. What’s more, the XP scales with higher difficulties as you’ll earn bonuses for completing each stage on the tougher settings (there are three difficulty settings). You’ll also find more XP (as well as ammo) scattered around each level, attempting to reward players for exploration and veering off the narrow path. Unfortunately, leveling up your character loses its appeal since you’re able to just respawn after every death with reckless abandon, meaning it really doesn’t matter how strong your character is. 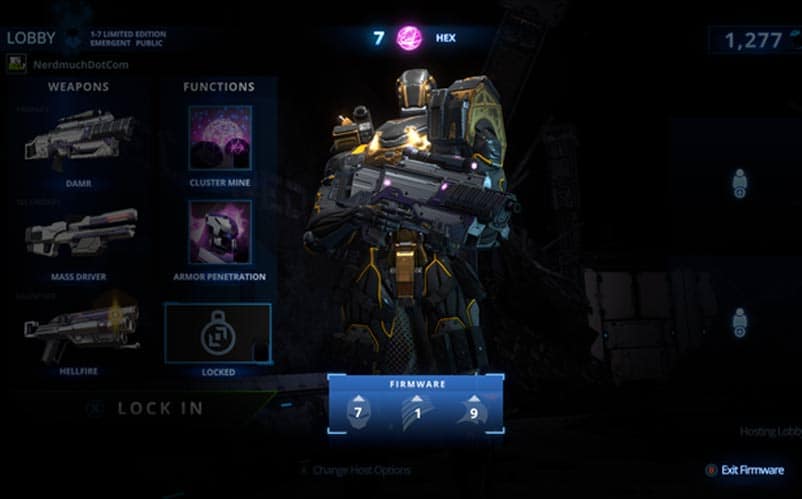 It’s not all doom and gloom for Livelock though, as there are a few fun moments in the game. Boss battles can be tough and enjoyable, but again, if you’re able to respawn whenever you die, their potential enjoyment is greatly diminished. As far as the look of Livelock is concerned, its design and art are very finicky. Some items, like the various lasers, the robots themselves, and the game’s color palette all look great, but the game’s environments (which all look similar to one another) don’t look as good as they could, with muddy textures and an overall same-looking aesthetic. As I played through, I couldn’t help but wonder if a new-looking environment and some new mechanics would make an appearance. Instead, each stage felt like a familiar experience. What’s more, there are significant frame rate issues that also take away from what could be an enjoyable experience.

Livelock is a game that’s cool in concept but lacks the proper execution. I’m not sure how long the game had been in development for before being released, but it feels like it could’ve used another few months to smooth it out and make some tweaks. Sure, it’s an enjoyable game at its core, but the framerate issues, respawn mechanic and cheesy dialogue hold it back from being a must-play game.